Bullet Train is a bloody comedic action film with a spy v. spy vibe – except it’s assassin vs. assassin – all on board a Tokyo bullet train. Unfortunately, this throwback 90s/00s comedy and action goes off track, and needs to be updated to today’s filmgoing sensibilities, with fewer stereotypical tropes, and more authentic representation all aboard. 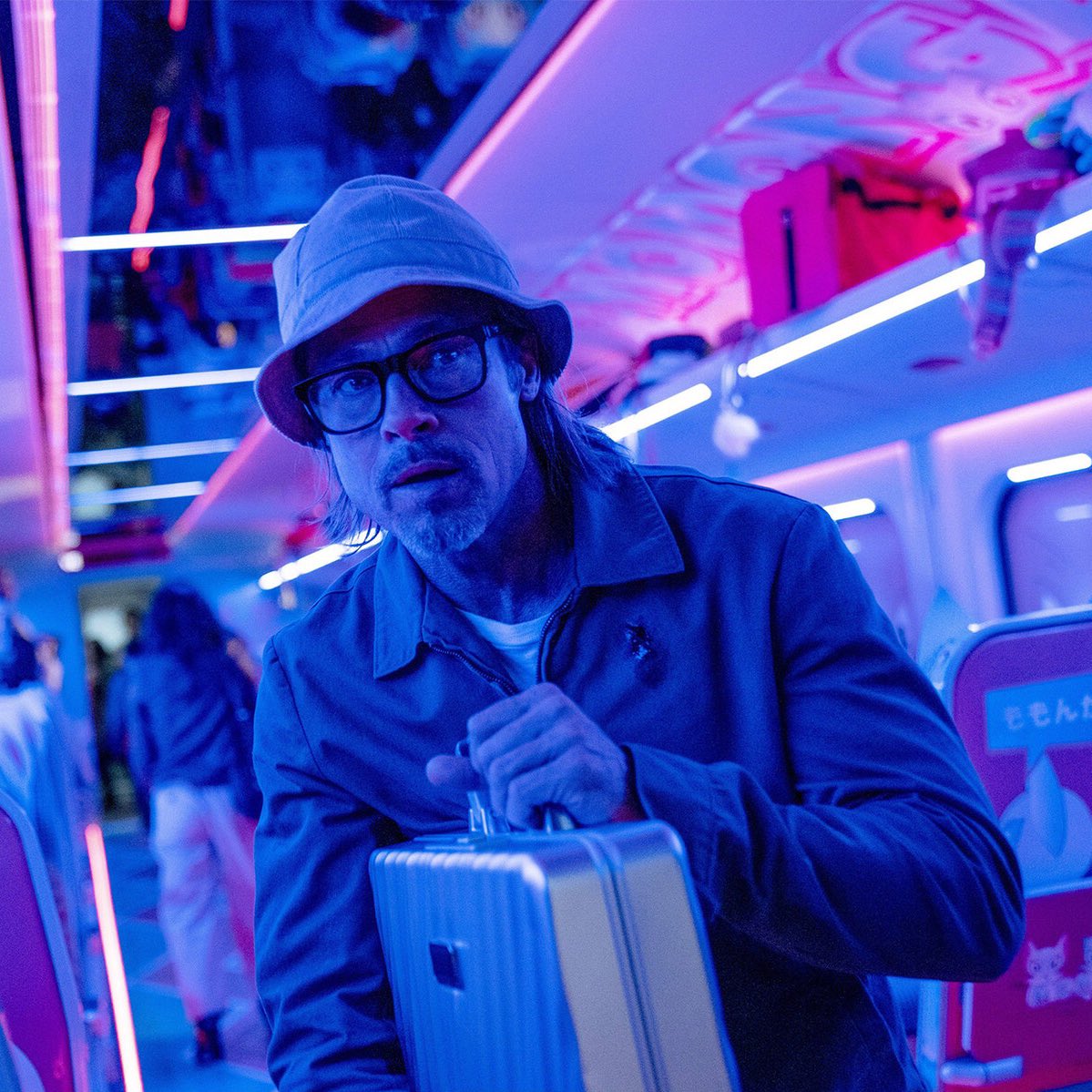 That Brad Pitt stars in Bullet Train is the biggest headline / reason for this film. Brad’s been very busy behind the scenes executive producing a range of diverse films and TV series, including Father of the Bride, Paper Girls, Minari, and the OA. Acting: He appeared in The Lost City this summer with Channing Tatum and Sandra Bullock (who SPOILER make cameos in this film). Previously, he was in Once Upon a Time in Hollywood and Ad Astra, both in 2019.

Brad is the best part of the film. His charisma shines throughout, playing goofy Ladybug, a ‘snatch and grab’ specialist who is more pacifist thief than deadly hitman. His handler sends him on a simple mission: Steal a briefcase on Tokyo Bullet Train. But he gets caught up in a revenge plot between quirky but deadly British assassins (Brian Tyree Henry and Aaron-Taylor Johnson), cartel crime bosses, and Japanese yakuza gangs, who basically are all trying to kill each other on the train.

The vibe makes is very 90s/00s Kill Bill – Pulp Fiction. Ladybug, the assassins, and several eccentric comedic characters wax philosophical about life and Thomas the Train characters, while guns are blazing, katanas are slicing, and blood splats are flying all around the train. It’s definitely influenced by Quentin Tarantino. However he’s not involved at all. Some of the humor and editing (slow fight scenes) doesn’t quite hit right, so the film at times seems more Tarantino-wannabe Wish than homage.

The Latin cartel crime bosses and Japanese yakuza with guns and katanas unfortunately both play into old 90s/00s villain stereotypes.

The lack of Japanese talent in front of or behind the camera for a film set in Japan is too readily apparent. There are two main Japanese characters: an assassin and his father katana-swinging samurai-esque father. Yes it’s representation, but somewhat stereotyped. The other Japanese supporting characters are bullet train staff with no agency: Masi Oka (Heroes), plays a train conductor with an accent (Oka has no accent). Karen Fukuhara plays a concession girl with an accent (she has no accent). In fact she is the only Asian woman character in this film, set in Japan. This film could have definitely added a strong Japanese female character. Of course this film would make her a dragon lady ninja assassin villain, so maybe not. The Tokyo setting with neon lights and Japanese characters all over the marketing seems to fantasize Japanese culture, rather than accurately represent it.

In movies, when mostly white lead cast is in another country where the only local representation is villains or service staff is an unfortunate Hollywood trope. It usually means the writer and director are white Americans, which is the case here. Perhaps they rode the bullet train in Tokyo once, and thought it’d be cool to do a film about a heist on a train in a Tarantino style? Voila, this movie.

Speaking of the bullet train – there’s a completely unrealistic scene where one of the characters jumps from a train platform onto the back of the sleek outside of the bullet train, and then uses his ringed fist to break the glass and get back into the train. This is totally ridiculous – it’s an American Western train move where trains go 40-60 mph. Can’t do that on a bullet train going 150-200 mph, you’d fly right off. And definitely wouldn’t be able to break the glass with your ringed fist.

We saw it in 4DX, which was a highlight of the experience. The 4DX theatre motion, light, and water effects really moves in sync with the on screen action. You can  feel the train lurching, wind blowing as the train is speeding, martial arts kicks in the back, and more. And when you see the train jump the tracks on screen, you know to get ready in your chair for a very bumpy ride!