Deadpool creator Rob Liefeld hosted an advance screening of Deadpool 2 with cosplayers, signed comic books and posters, and more than two dozen raffle prizes on the day before the film’s wide release. 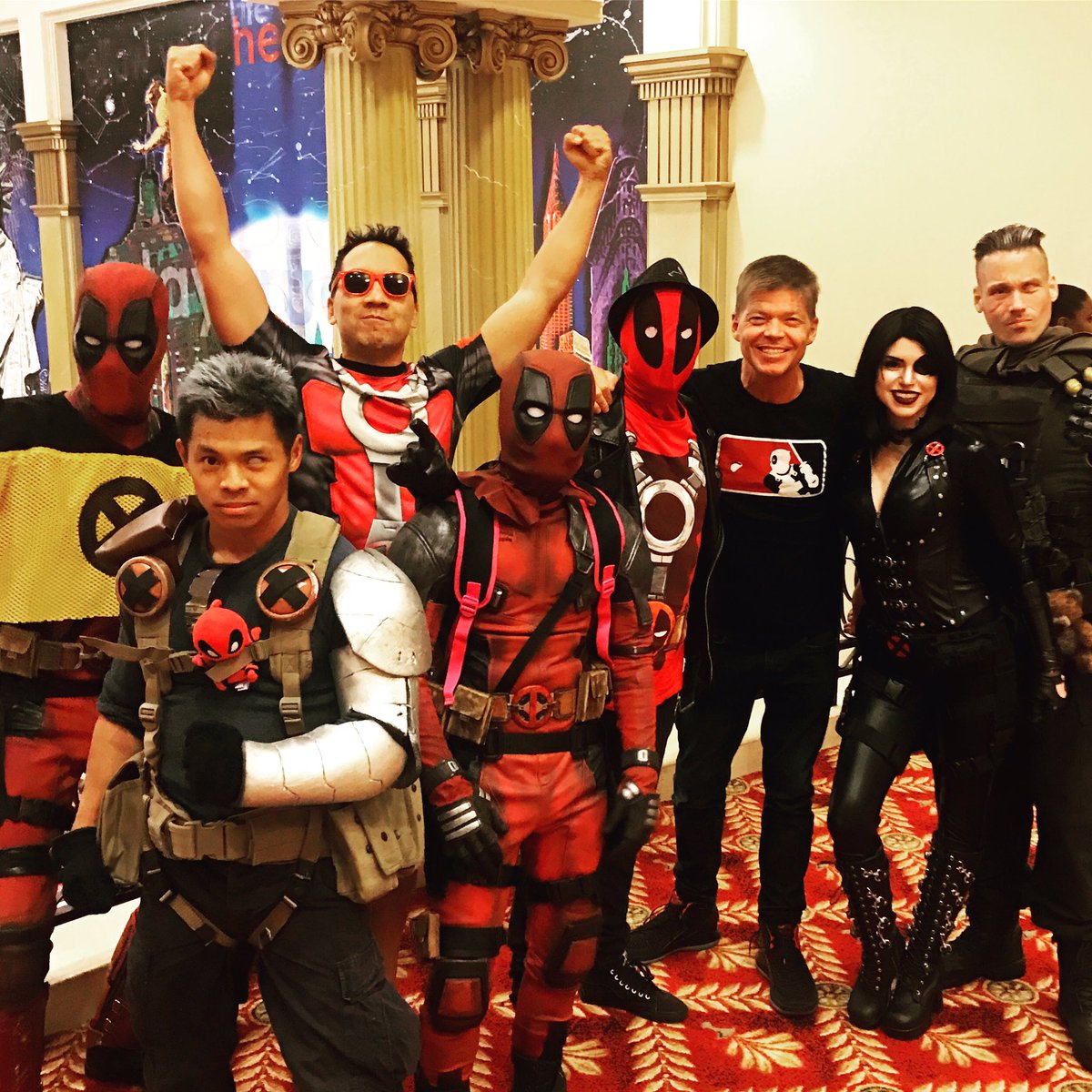 Liefeld thanks fans for attending and supporting Deadpool. Liefeld attended a similar fan event two years ago for the first Deadpool, which went on to wide success at the box office with $363M domestic, and setting R-rated records as well.

Liefled said that when he visited the set last time, when the film was very indie-budget, filming was on back streets in Vancouver. He said that this time, he was excited to visit sets on studios.

Rob Liefled created Deadpool’s look in the 90s, appearing as a supporting character in the X-Men spinoff comic book New Mutants #98 in Feb 1991. Deadpool’s wry humor, agility eventually catapulted him to fan favorite, with his own series.

Like Spiderman, Deadpool wears a face mask, making him  easy to draw, which helps with quicker drawing and production of books. It also helps in films, where Ryan Reynolds can easily insert new dialogue. In fact, Ryan was replacing his Deadpool banter with added dialogue because he was thinking up funnier lines after filming.

Our Digital LA influencer crew got into the Deadpool mood, attending the Deadpool pop-up bar in downtown LA last week, complete with cosplay, tattoos, and free chimichangas. See our review. 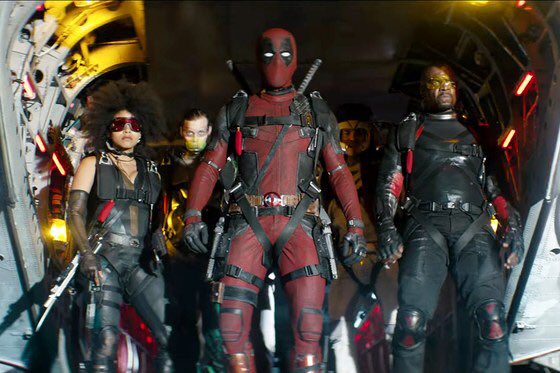 Deadpool 2 has more action, gore, swearing, and crude lewd jokes than the first one. Plus Deadpool uses his regeneration healing powers a LOT more – they are MUCH more advanced than Wolverine’s. Ryan Reyonld’s smart-alec acting is again spot on. He is Deadpool.

Josh Brolin is terrific a cybernetic Cable. He got ripped for the role, and it shows. And Cable’s metal arm, glowing eye, and guns, look exactly as they should from the comic book. His acting as Cable is terrific. There are a few points when he’s describing what happens in the future in voice over, and his gravely voice sounds just like a Thanos rant; he also voices Thanos in Avengers Infinity War, released less than a month ago.

Zazie Beetz’s Domino is fantastic. Her acting brightens up her scenes. And her “luck” power, which Deadpool initially claims isn’t that cinematic, proves to be especially cinematic in the most James Bond, nick-of-time way.

Fans of the comics will be excited that several X-Men characters make appearances, rooting Deadpool more firmly in the world of the X-Men.

Remember it’s R! Not exactly for young kids. It is bloodier than the first one, although the violence is mostly cartoon-y violence.

And make sure you stick around for the end credit scenes – hilarious! 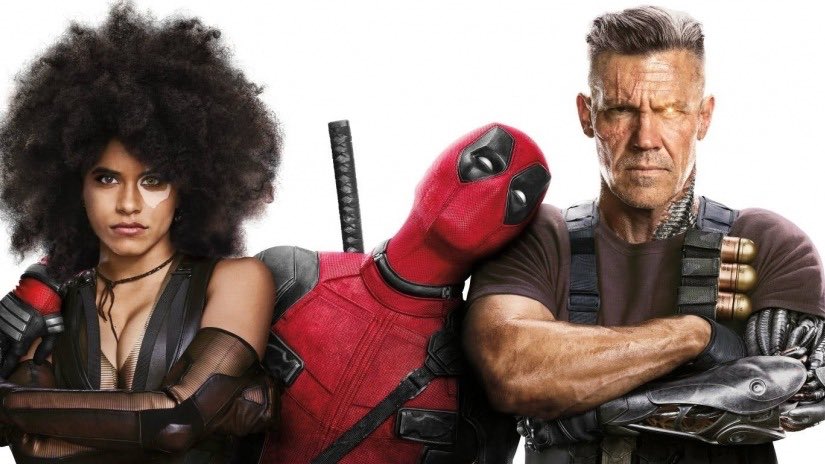 Here’s the spoiler-y review. If you haven’t seen it yet, stop reading now and go see the movie!

OK, if you’re still here, you’ve seen it and are ready to really discuss it!

X-Men Cameo: Finally we get to see some X-Men having a meeting in the mansion before Beast shuts the door. Beast, Quicksilver, Storm are there. At least Deadpool gets to take Prof X’s wheelchair and Cerebro for a spin.

AHA’s Take on Me: Soundtrack playing Take On Me, where the character is bouncing around between real world and white-washed line-drawn animation world – works very well when Ryan is in limbo trying to reconnect with his dead girlfriend chilling in heaven.

Negasonic and Yukio are lesbian lovers! First outright lesbian couple in any superhero film! You saw it in Deadpool 2 first! And it’s like no big deal.

Deadpool loves everyone: Much more than just flirting with the pizza delivery guy in the first movie, Colossus flirts with Colossus with an ass grab and that scissor hand gesture lol.

Vanisher Cameo,: did you catch Brad Pitt when he appears for second getting electrocuted?

Give those End Credits and Award. Deadpool travel’s back in time to fix all the bad choices in Ryan Reynold’s acting career, from Green Lantern to merc-without-a-mouth Deadpool in Wolverine. Hilarious! And satisfying to finally see them addressed on screen.

Shattered Shatterstar. OK, so we finally get Shatterstar on screen, and he dies in 2 seconds? C’mon!

Everyone else dies too? Sure, it’s funny Bedlam, Shatterstar, and Vanisher die in a parachute jump in two seconds, but really? These characters should have at least have had a practice training fight, or at least got to join the main fight before being offed.

Less Vanessa. Actress Morena Baccarin helps ground Deadpool in the first film, and is his motivation to do the right thing in this film. But it’s stereotypical like most superhero films: the girlfriend is a love interest AND a plot device – gets killed to motivate the hero. Cable is also motivated to get revenge for the death of his wife and daughter. Again, women are killed off to motivate the hero.

Strong Women Need More to Do. Domino, Negasonic, and Yukio are all strong women, but they need more to do in this film. Negasonic and Yukio deliver the final blows vs Colossus, but in true Fox film fashion, they get one attack move per battle.