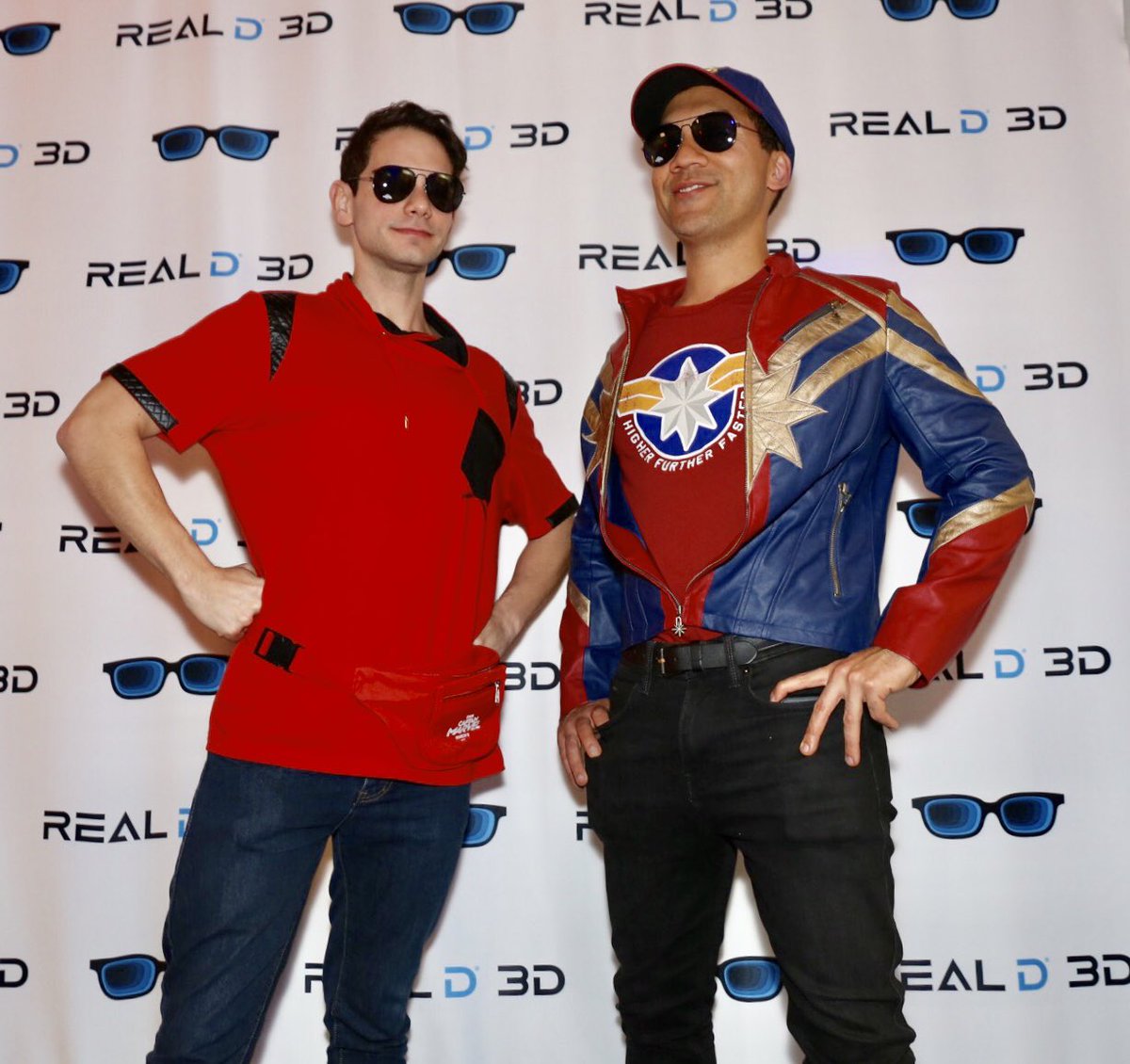 The influencer event was very digital, which we love. 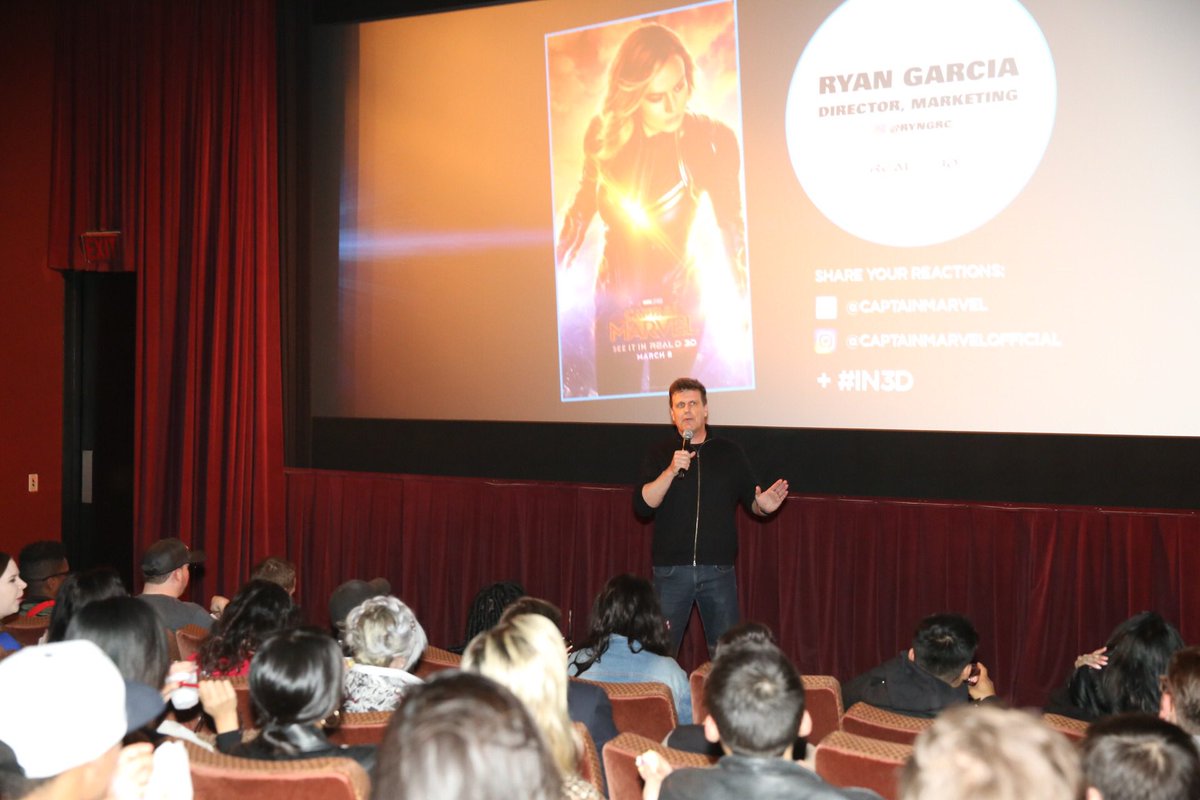 Right before the screening in RealD’s private screening room, a RealD 3D executive described several tech benefits of RealD 3D compared to other 3D. He was introduced by Ryan Garcia, RealD 3D’s Marketing Director, who said it was the one year anniversary of RealD’s influencer screening program.

Social media influencers, bloggers, and more attended to meet each other, and take photos on the step-n-repeat. The event hashtags and social media for Twitter @CaptainMarvel #In3D and Instagram @capainmarvelofficial were displayed on cocktail table cards, and on the video screens in the event space on on screen in the screening room.

Attendees used the new AirCam app to get their step and repeat photos online instantly, without having to wait. As soon as the AirCam photographer took a photo, her wifi-enable camera uploaded it instantly to an AirCam photo album. Attendees could access the album by just going to air.cam on their phone browser, to see ALL the photos the photographer was taking at the event.

When you create an Air.Cam album and sync it with your wifi-enable camera, you can set the distance from a location, and the time duration that the album will be available. For example, the photographer set the album to be viewable with in 300 feet of the RealD HQ, and for 7 hours after the event.

It’s very cool to get professional photos as soon as they are taken, and to see the album of all the photos of the event, to get photos of friends or general atmosphere. 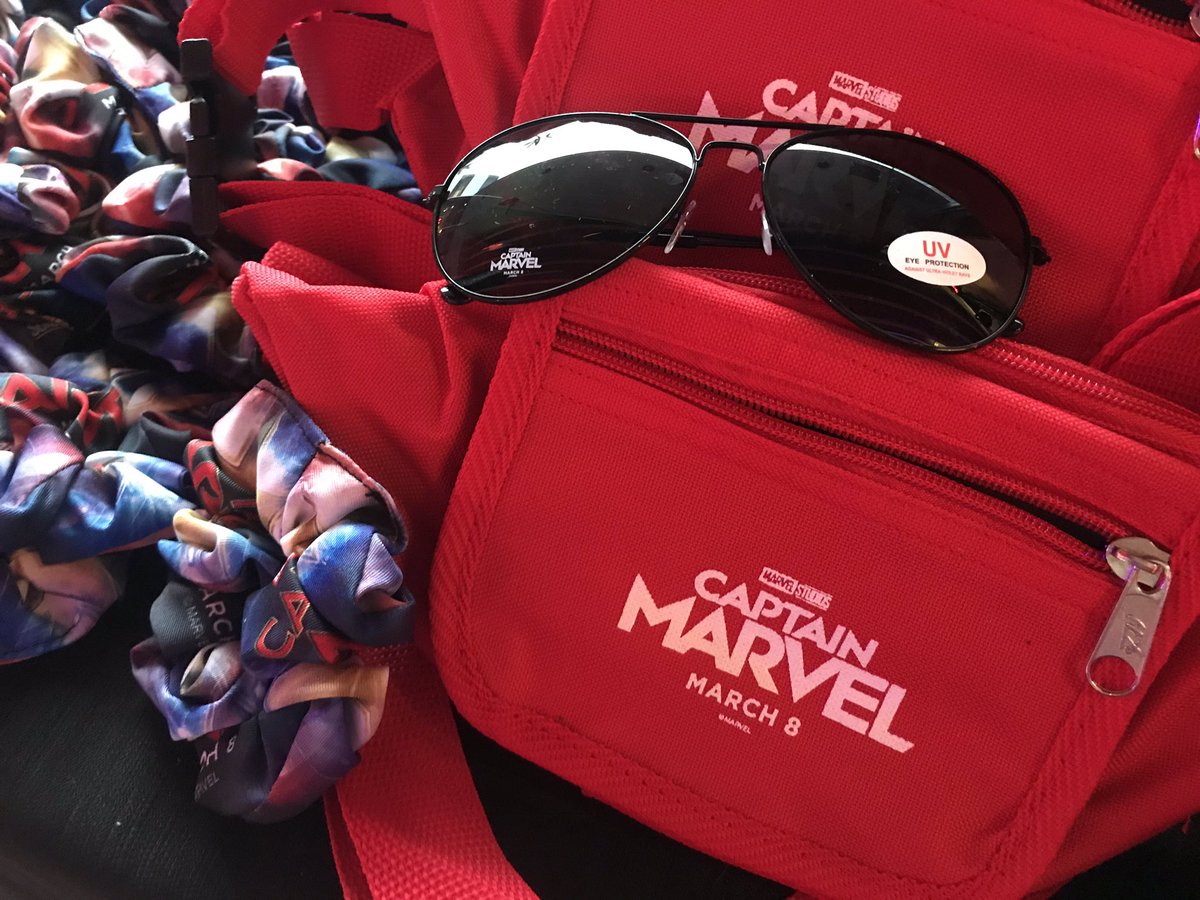 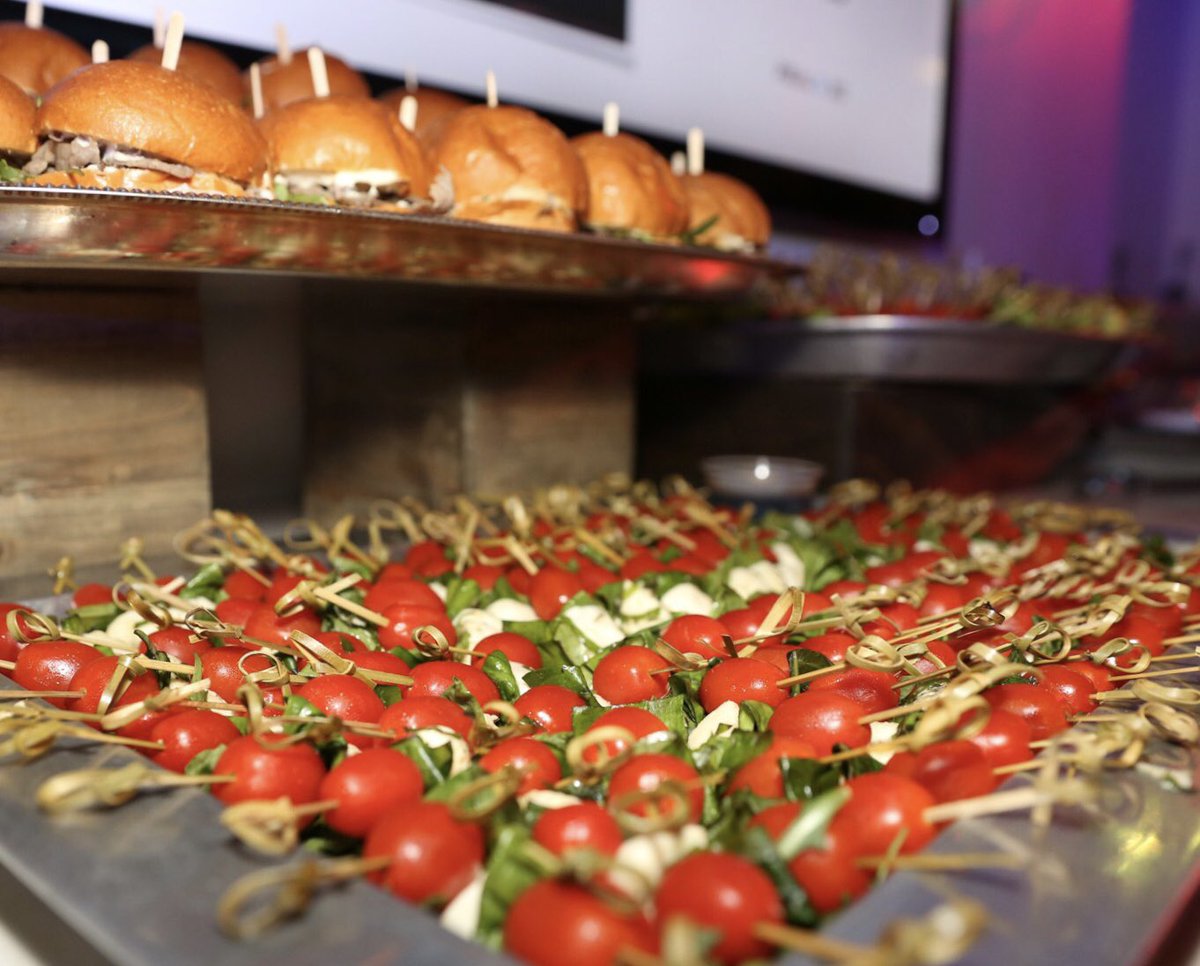 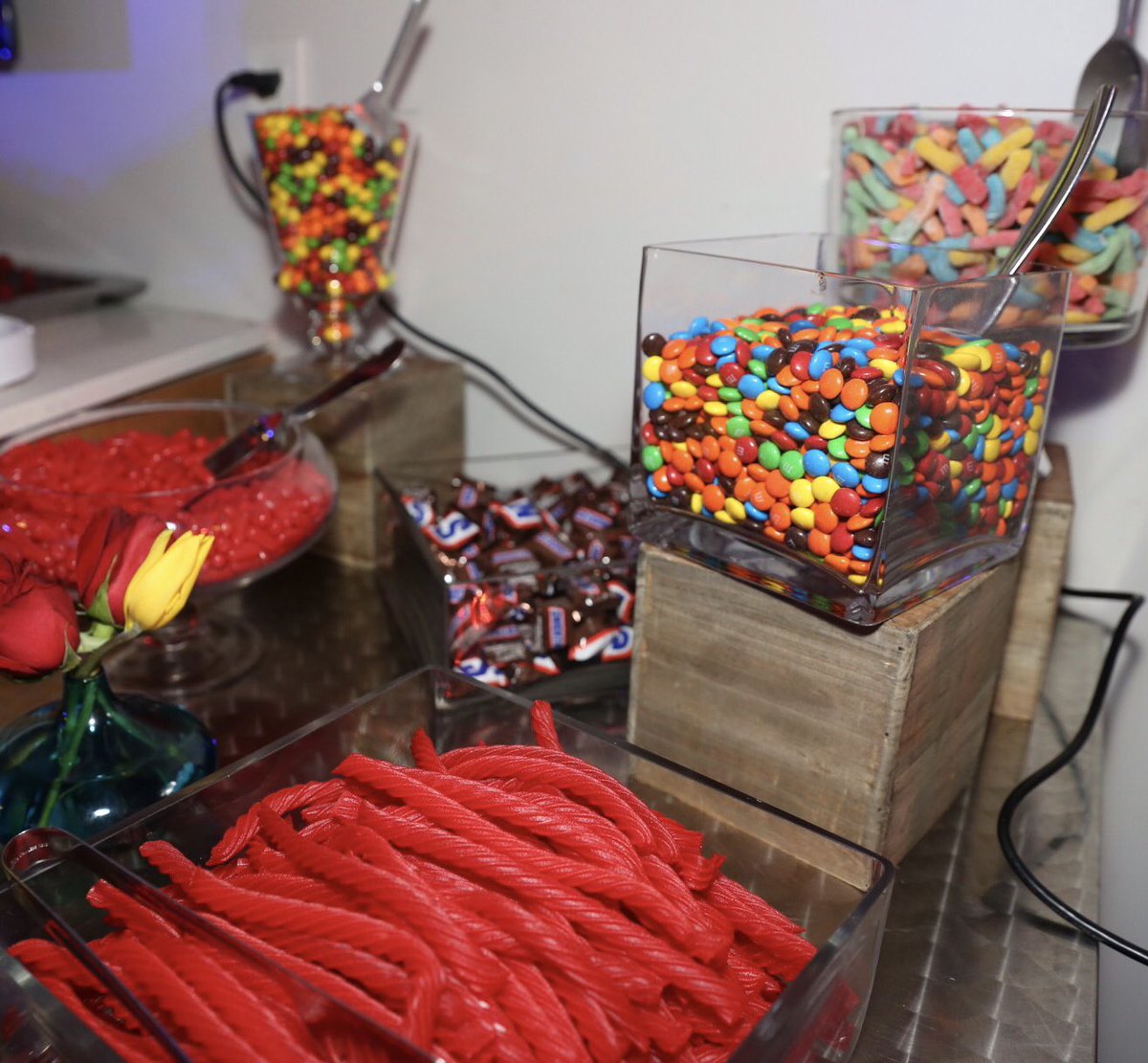 Several 80s video games were available for free play by the open bar.

Thanks RealD 3D and Disney Captain Marvel for the screening! Thanks photog Elizabeth with AirCam for most of the pics in this article. 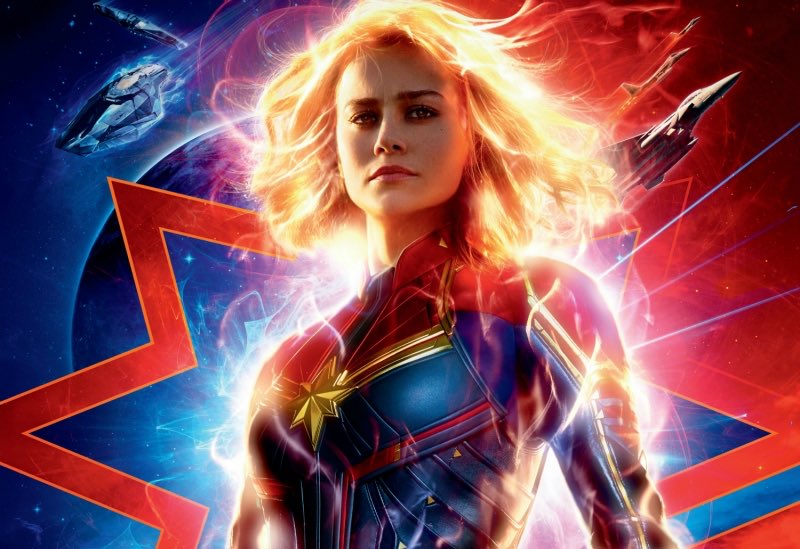 Overview: The highly anticipated Captain Marvel is the first in Marvel Cinematic Universe’s 10 years of 20 films to feature a woman in the title lead role. Oscar winning actress Brie Larson plays Captain Marvel with strength and confidence, and is especially inspiring for women and girls. Some improvements could be made in story structure, makeup, and VFX, but overall good film, with a few clues for the eagerly anticipated Avengers: Endgame.

Plot: In the film, Captain Marvel is part of an elite group of Kree warriors, which is sent to investigate a disturbance on a distant planet. When it’s revealed that Kree nemesis Skulls are involved, she ends up jumping into a spaceship in pursuit of an escaping Skrull. She eventually ends up crash landing into a Blockbuster in Los Angeles. She continues to purse the shapeshifting Skull, and meets Shield Agent Nick Fury (Samuel Jackson), pre-eye-patch. They team up in search of the undercover Skrull. Along the way, Carol starts to get flashbacks: She has been on Earth before. She must discover who she is to defeat the villains. 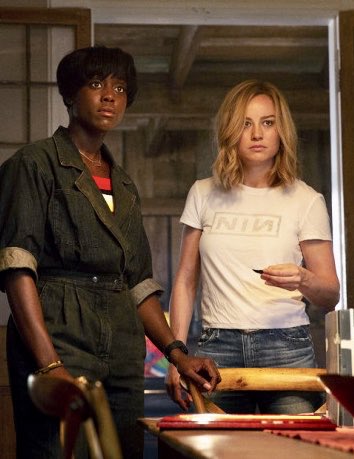 Acting: Brie does a good job playing strong-willed determined Captain Marvel. It’s fun to see Samuel Jackson play a less jaded, earlier Nick Fury, who even sings. Lashana Lynch does an excellent job playing Carol’s best friend Maria Rambeau, carrying the weight of emotional acting in her supporting role. Ben Mendelson does as good a job as he can under a rubber Skrull face mask, which seems to inhibit both his facial acting and his speech. In fact, Thanos, who is entirely CGI looks more realistic than Skrull Ben’s face mask, who sometimes looks like he’s a lost sleestack from Land of the Lost.

VFX: VFX of the opening Kree city scene, spaceship and fighter jet dogfights, and Captain Marvel’s origin look terrific. However, when Captain Marvel is fully charged up and flying around in space in the last half hour the film, some scenes seem a little cartoon-y like “Let’s add white cosmic flashes and streaks here!,” without the detail of exactly what is going on. 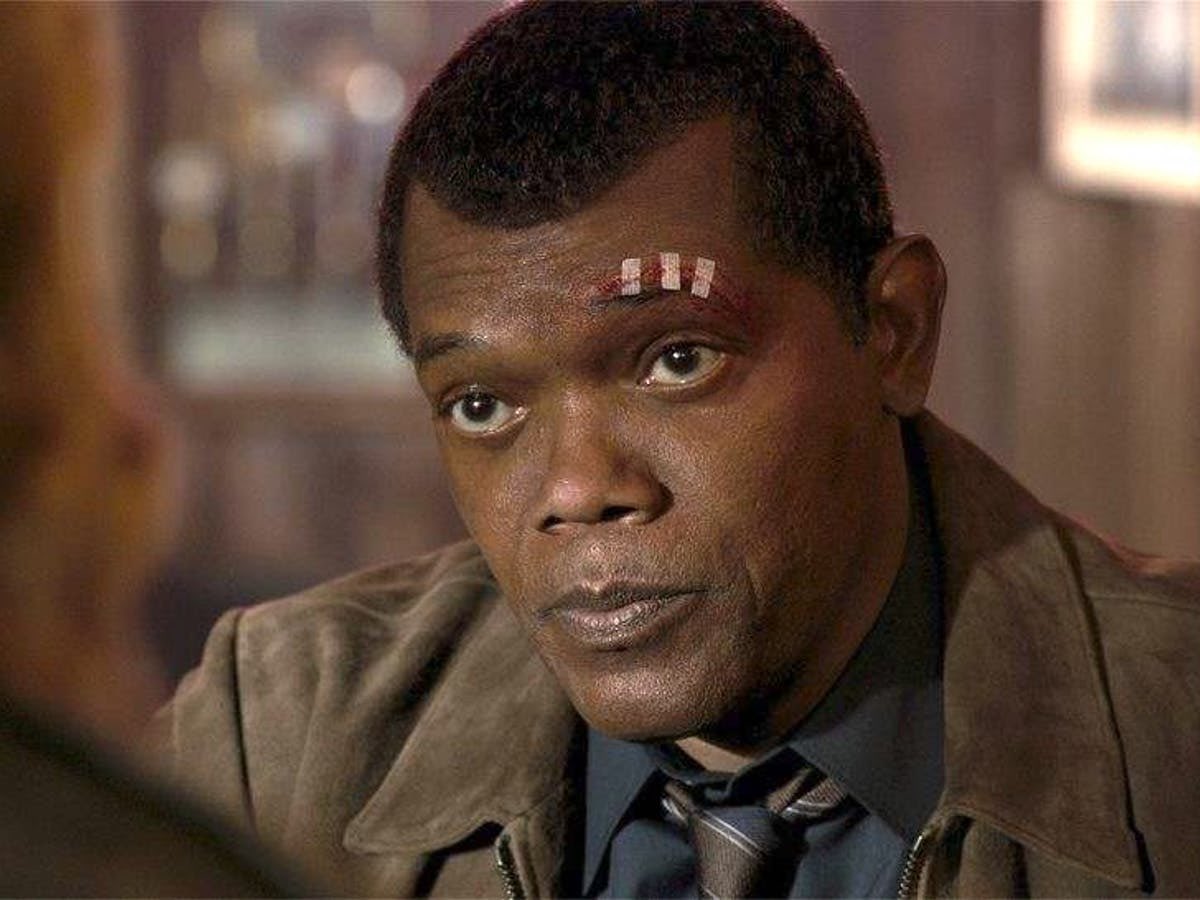 Since Captain Marvel is the first Marvel film with woman in the lead tile role, there are lots of expectations from both women and men on social media, film critics, etc., of how she should act, what she should say etc. Hopefully there will be many more women-led films in the next phase of Marvel films, so the world doesn’t have to demand and expect all aspects of femininity to be represented in this first female-led film, as often happens in first-representations.

Captain Marvel is also just two months before the highly anticipated Avengers: Endgame. This unfortunately timing makes the Captain Marvel story set in the 90s seem like just a backstory something in the way of Endgame. It perhaps should have released during December 2018, to fill the void of no Marvel holiday movies. Although perhaps the studio wants to emulate Black Panther’s success releasing in the winter last Feb. And build upon the International Women’s Day on March 8, release day.