Share it! circlefacebook circletwitterbird
Half of LA it seemed migrated like butterflies to Coachella Weekend 1. We covered digital at the annual music festival, including digital art installations, and the app. Plus parties: Neon Carnival with Detective Pikachu, KROQ House, and more! 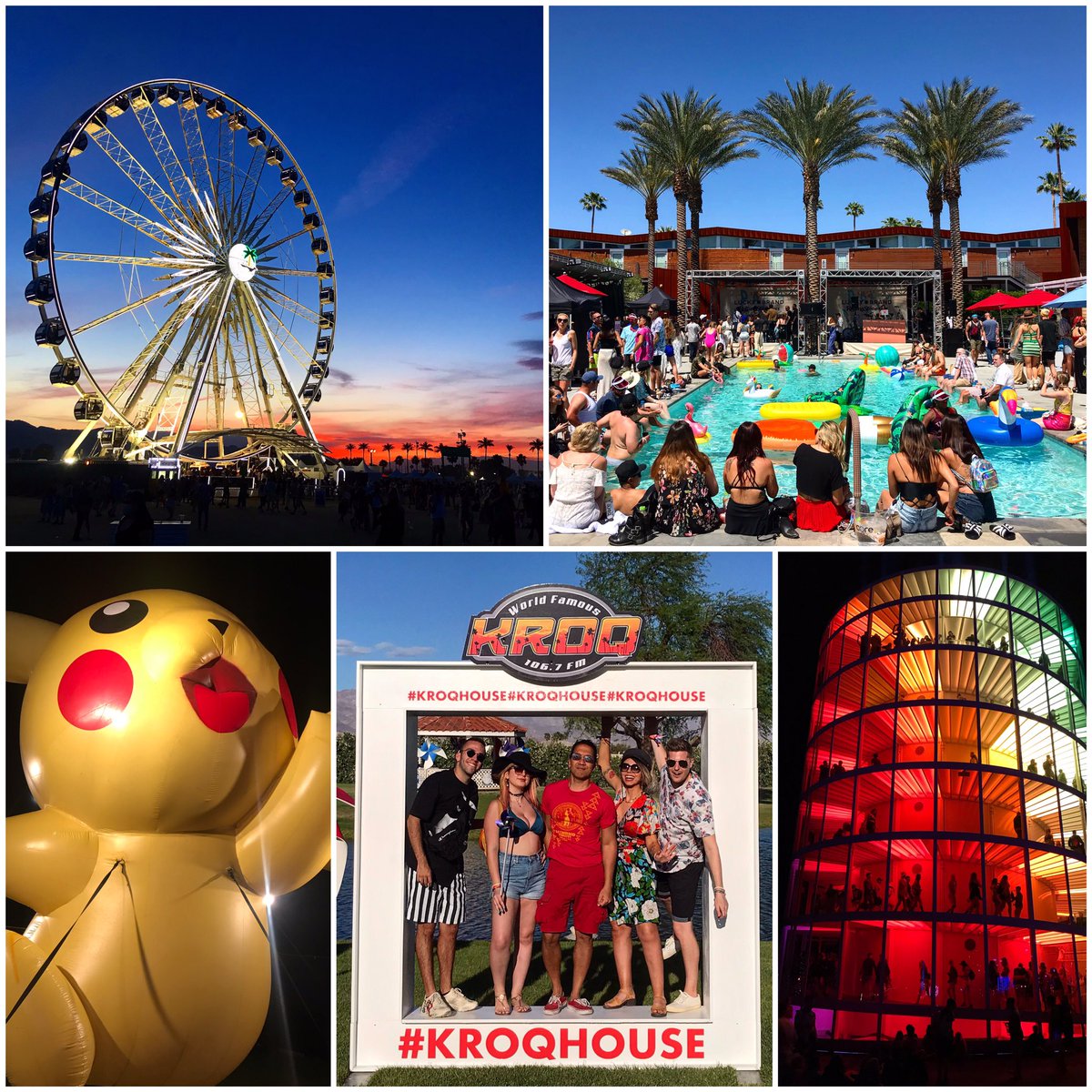 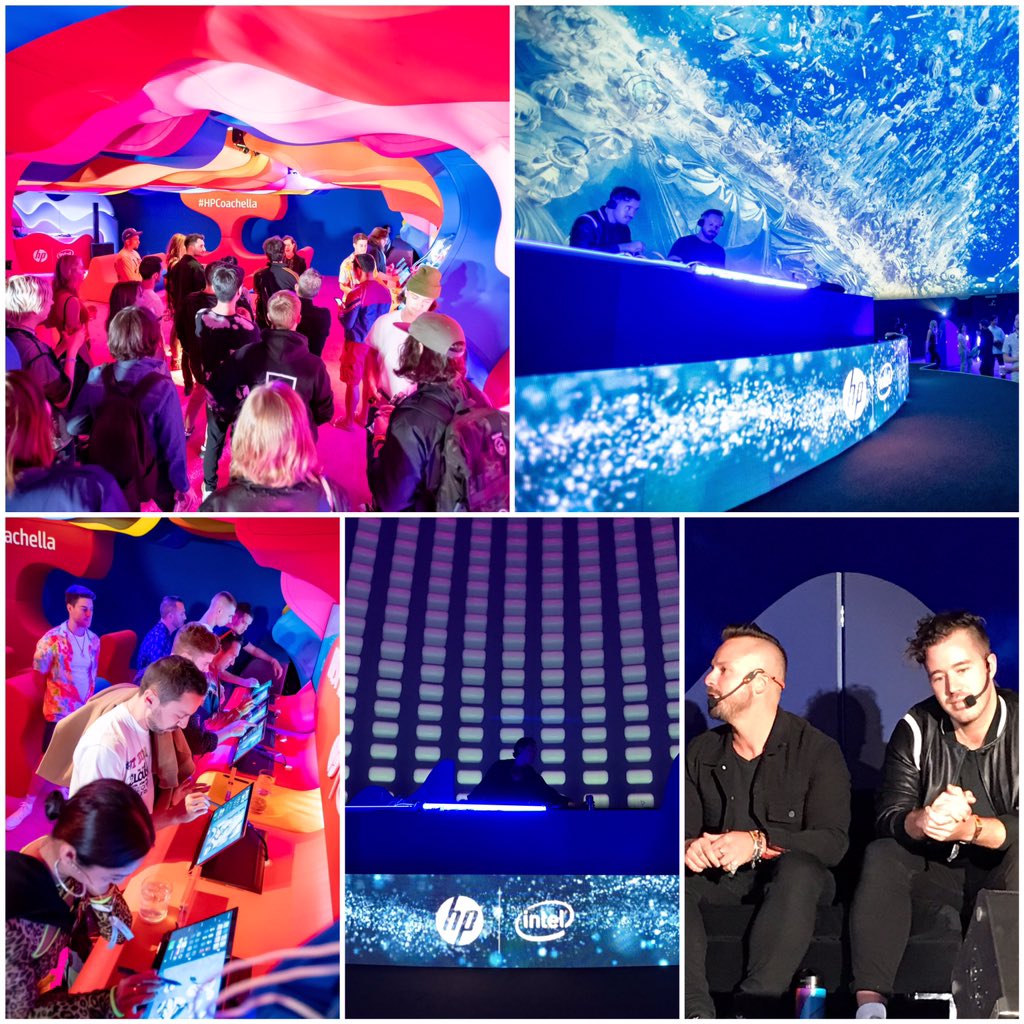 We got a sneak press preview of the official HP Coachella activation on Thursday night. It was the first time in Coachella history that a sponsor was able to bring media onto the Coachella festival grounds before it starts this weekend. At the press event, Rufus Du Sol described their musical inspiration for the Underwater dome film on a panel. 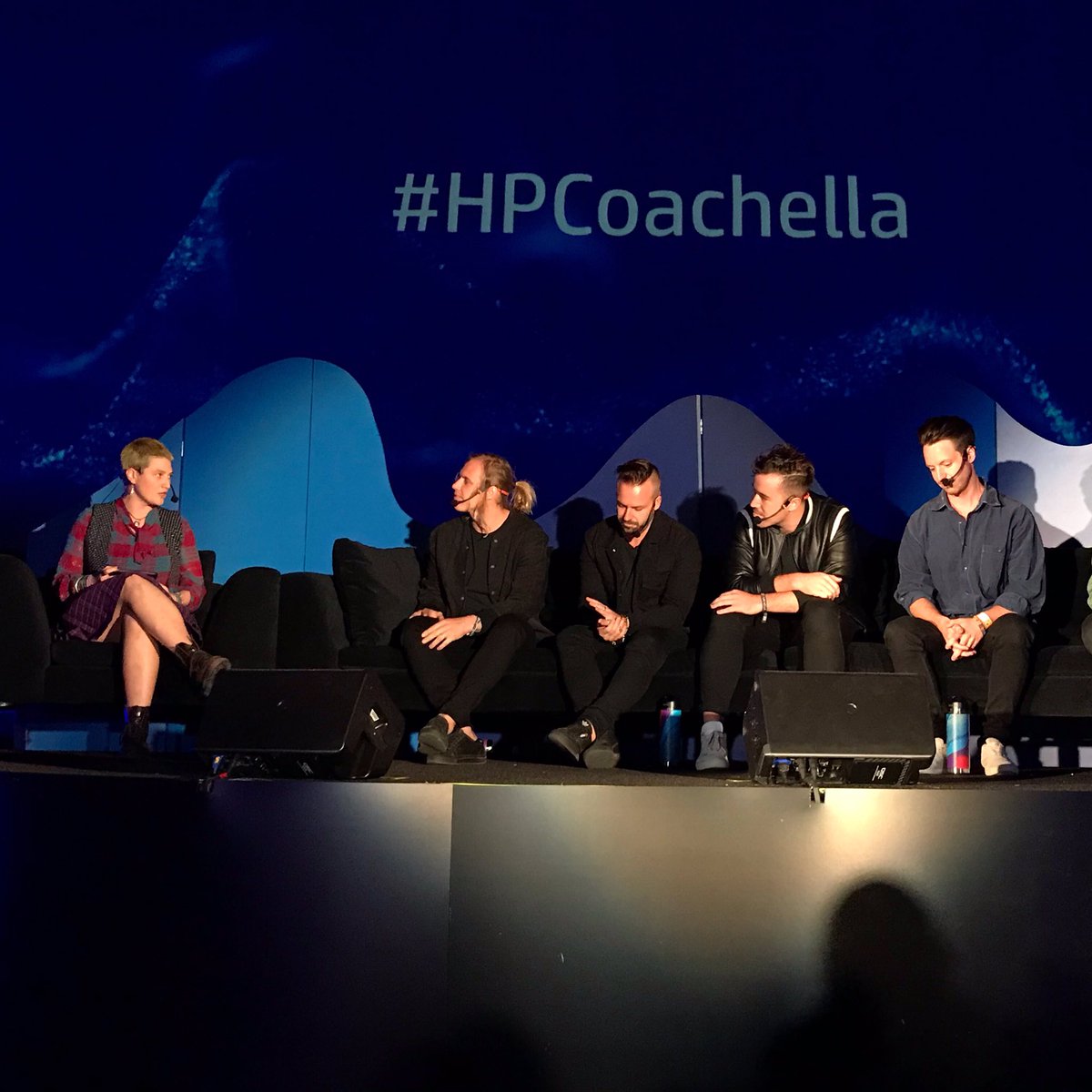 After the panel, attendees lay back or on the ground to watch the 3-minut Underwater film in the Antarctic Dome. 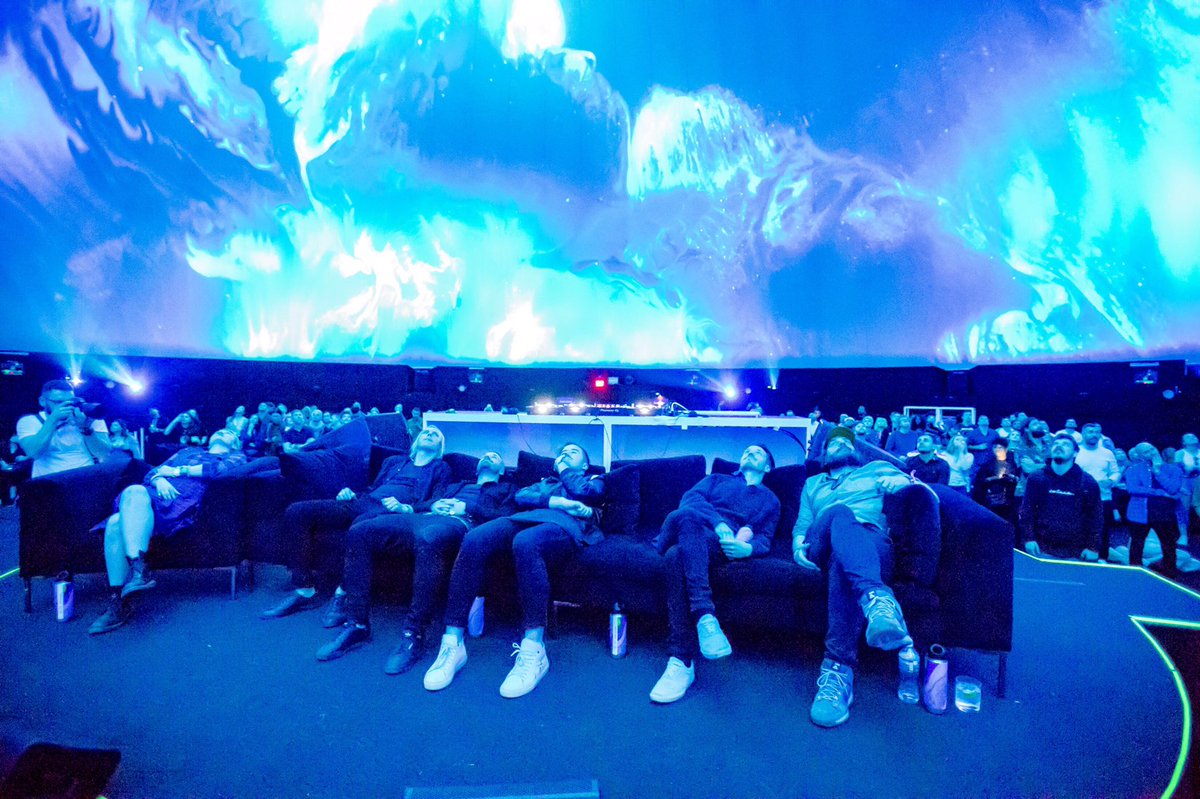 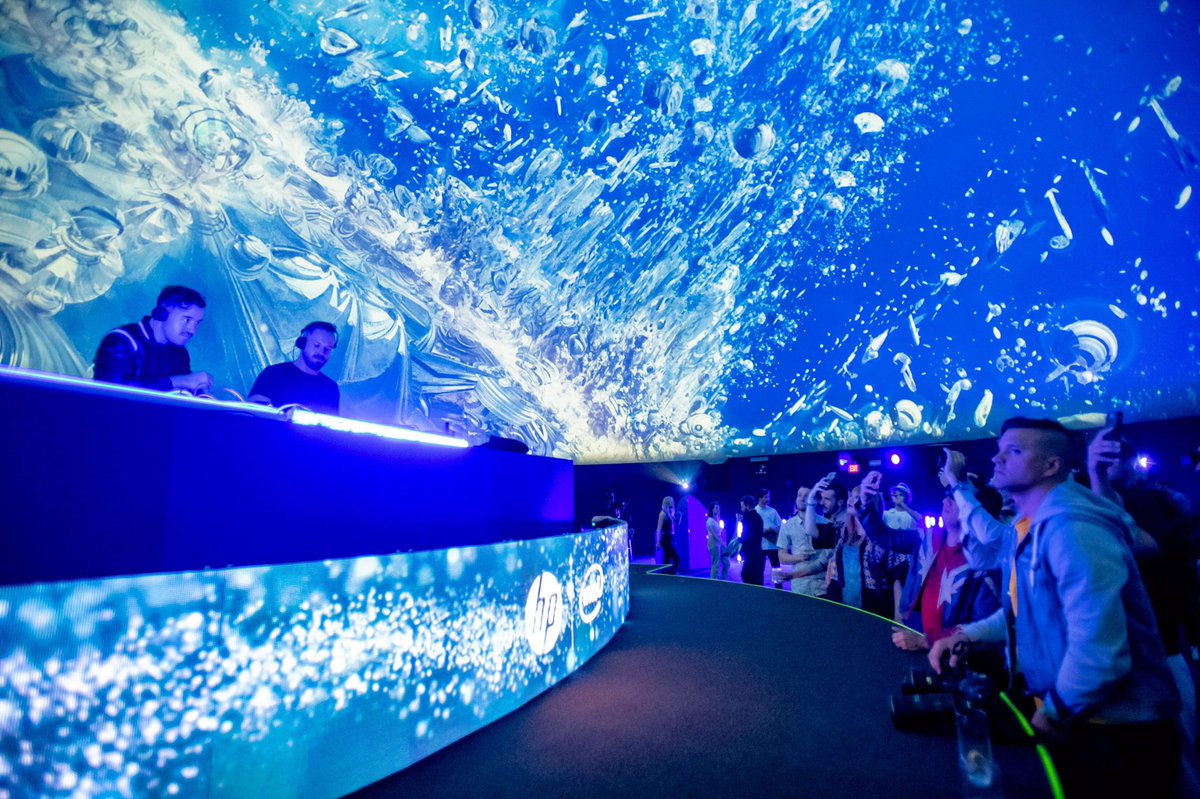 At the Inspired Ink lounge, you can charge your phones. You can also use HP tablets to customize your own backpack, print it and pick it up, perfect for carrying your fest gear. In the digital photobooths, you can take selfie videos of you interacting with the digital wall projections. 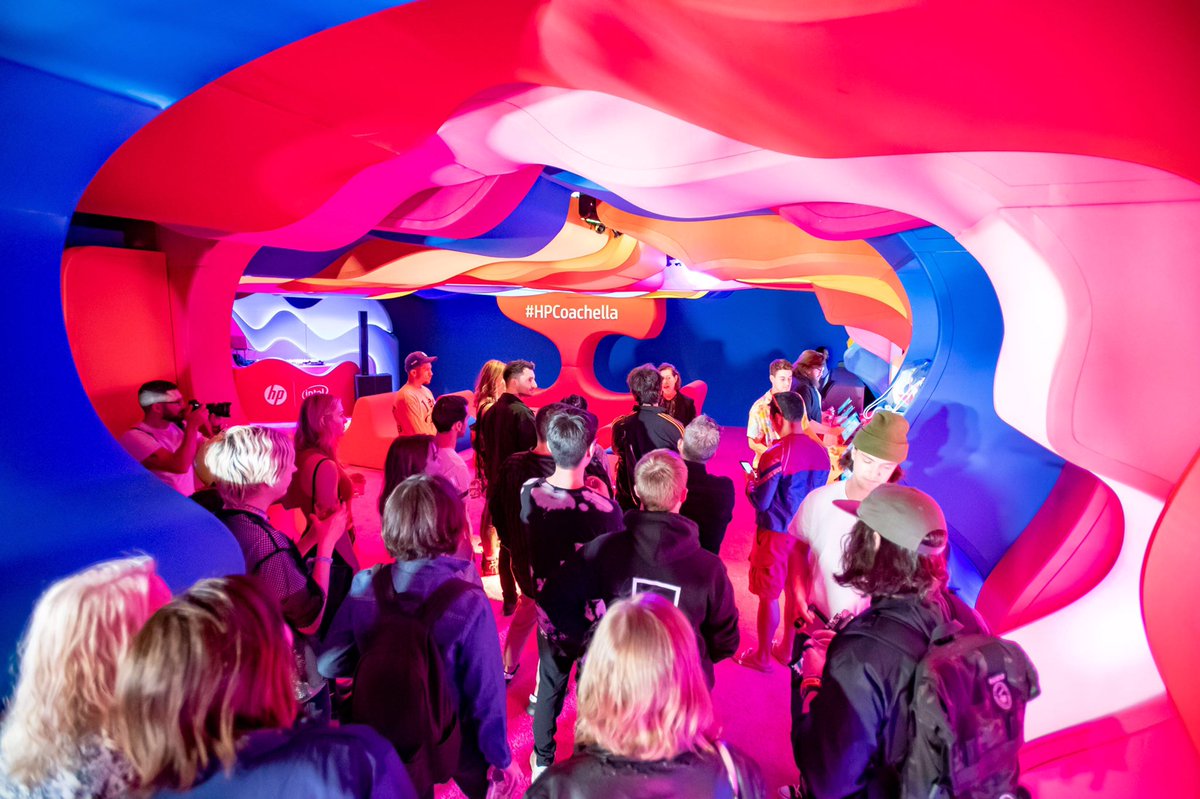 We talked to HPexecutives Emily Ketchen, head of US Marketing, and Daryl Butler, head of US Consumer Marketing, who gave us a tour of what’s new at HP‘s activation in its third year at Coachella in our exclusive #HPcoachella video.
Thanks to HP for all of the photos in this section.
Spectra art installation returned to Coachella for its second year. It’s the only structure by a UK based company. 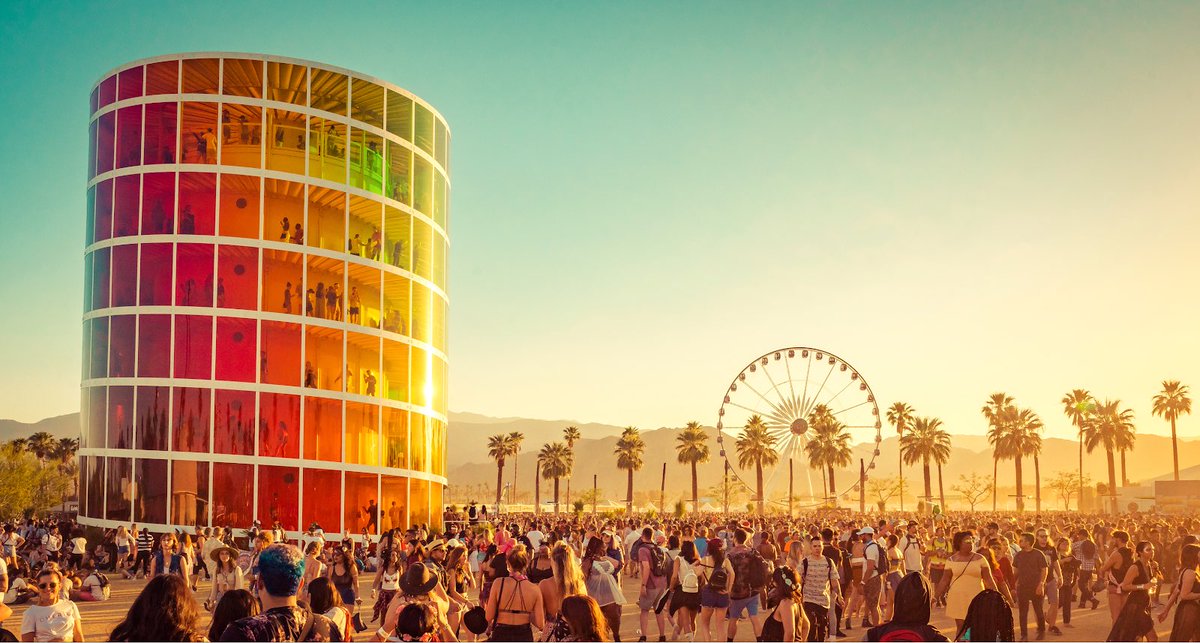 You can walk in the colorful cylindrical building with amazing views of the Coachella grounds, and an area to relax at the top.
Spectra looks great during the day, and glows at night. 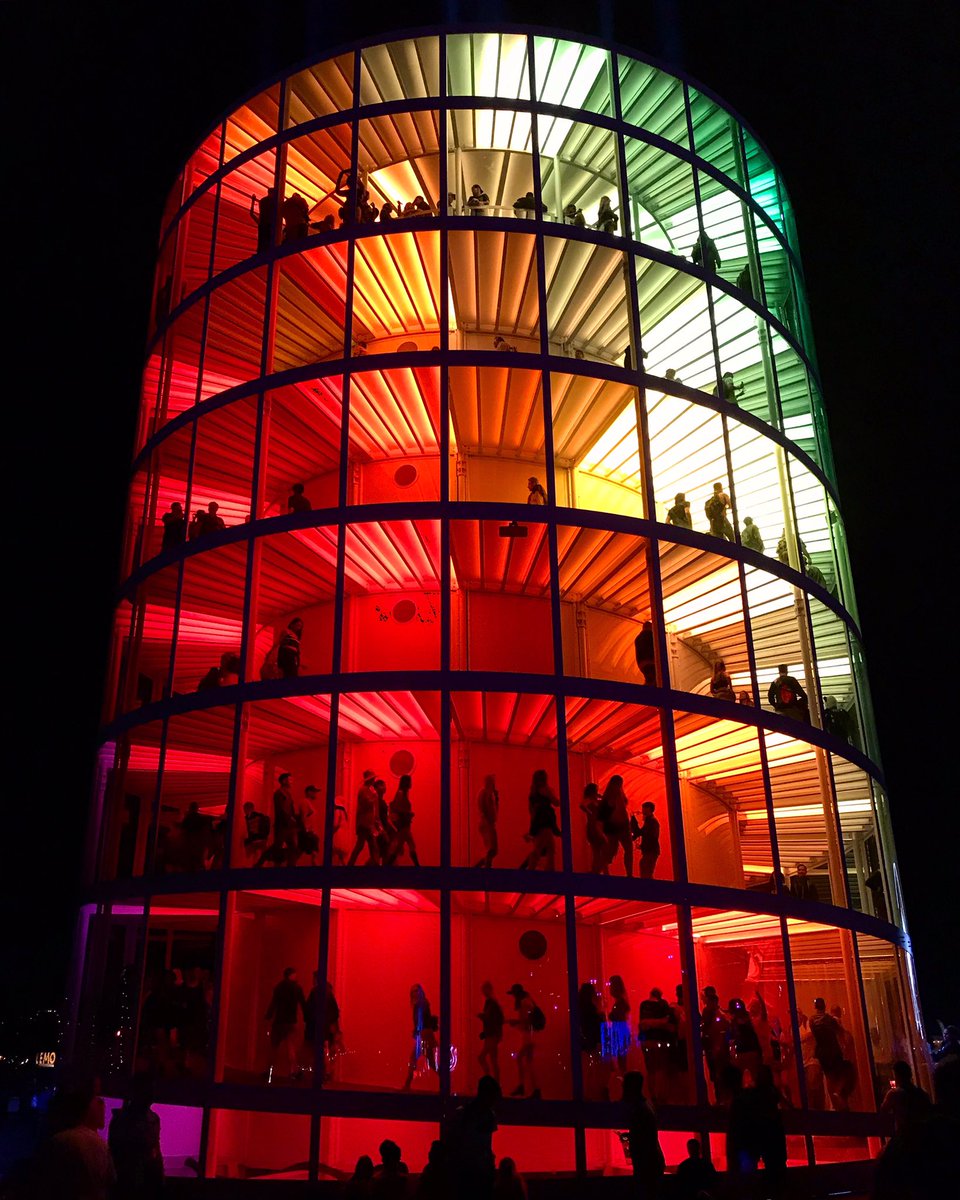 The lights inside are white, but the glass panes are colored, so the structure appears as a different color depending on what direction you’re looking at it.

The official Coachelal app was super useful and easily to navigate, with schedule, set times, and map. In addition, there were two new features this year.
AR: Users could download an additional AR pack to watch AR projections over several of the stages. Users had to look for the AR logo at the stages to activate the app. It was difficult to find the AR logo on stages with dazzling laser and TV shows everywhere. 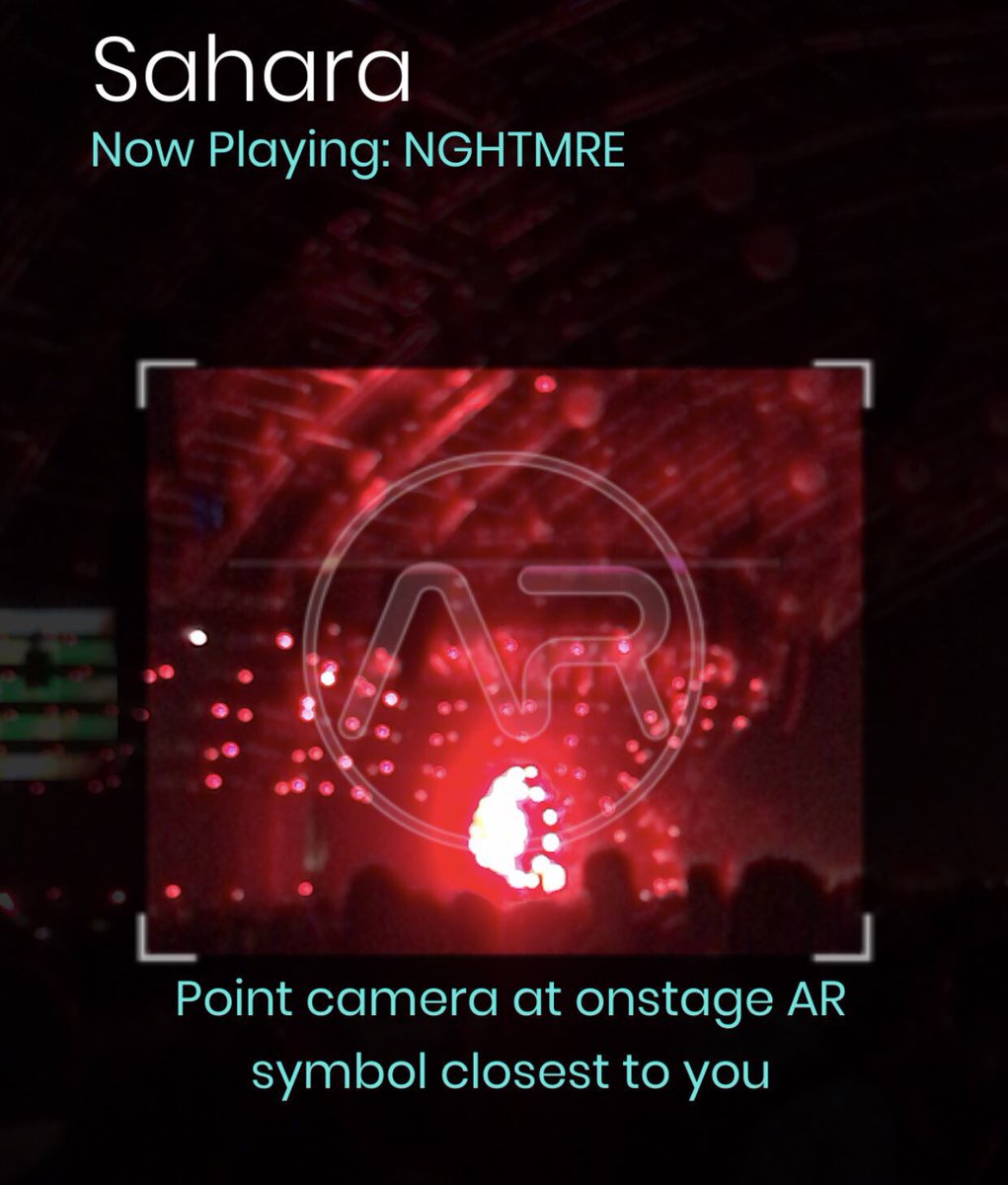 And it felt intrusive to be holding up your phone looking for AR animations, when thousands of people are dancing around you. Perhaps next time, the AR animations could be activated from a distance away by pointing your phone in the direction of the stage. This would make it easier to activate, without distracting others dancing nearby. The AR package required an additional download of 300+MB, which was difficult to download with limited phone service when even text messages had difficulty going through. Definitely download the AR pack BEFORE going to the festival grounds.
Coins. The Coachella app also let you scan coins to collect points, starting with a coin in your Coachella welcome box. The other coins are scattered throughout the festival, to create a coin-collecting game with points for each action. Good way to add even more fun to your Coachella experience. 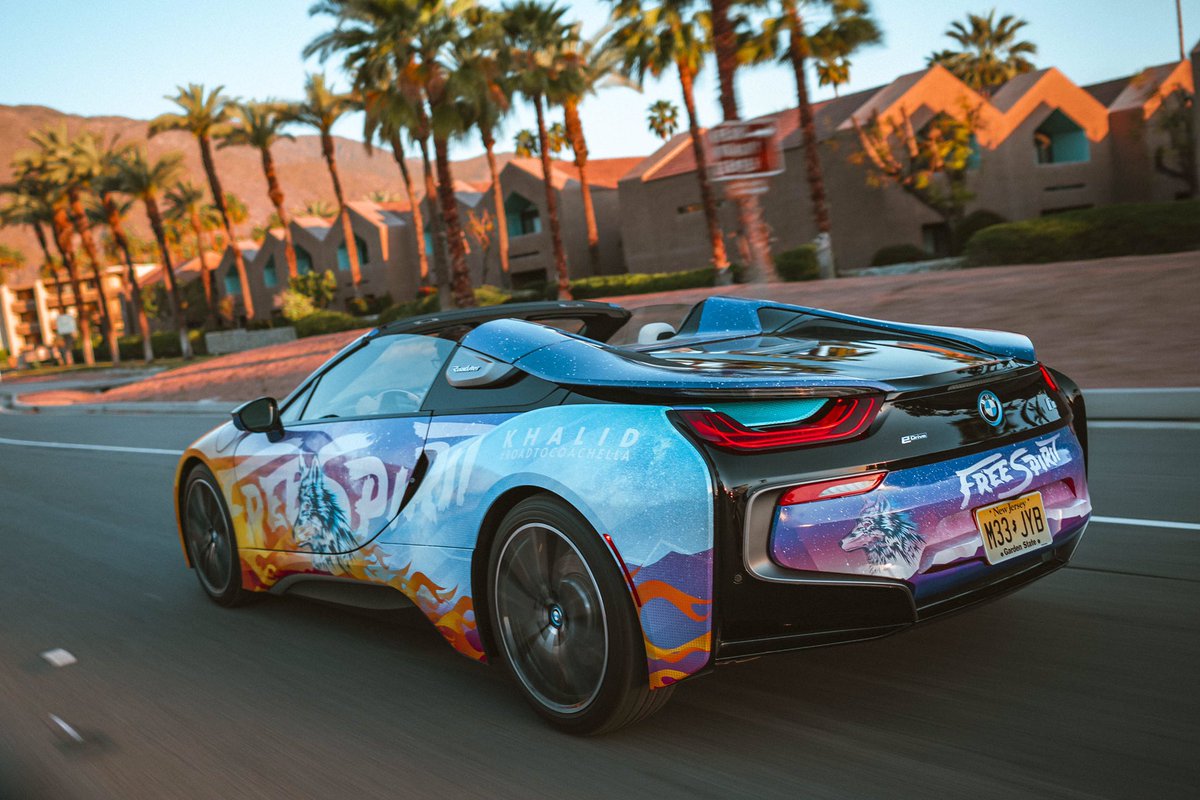 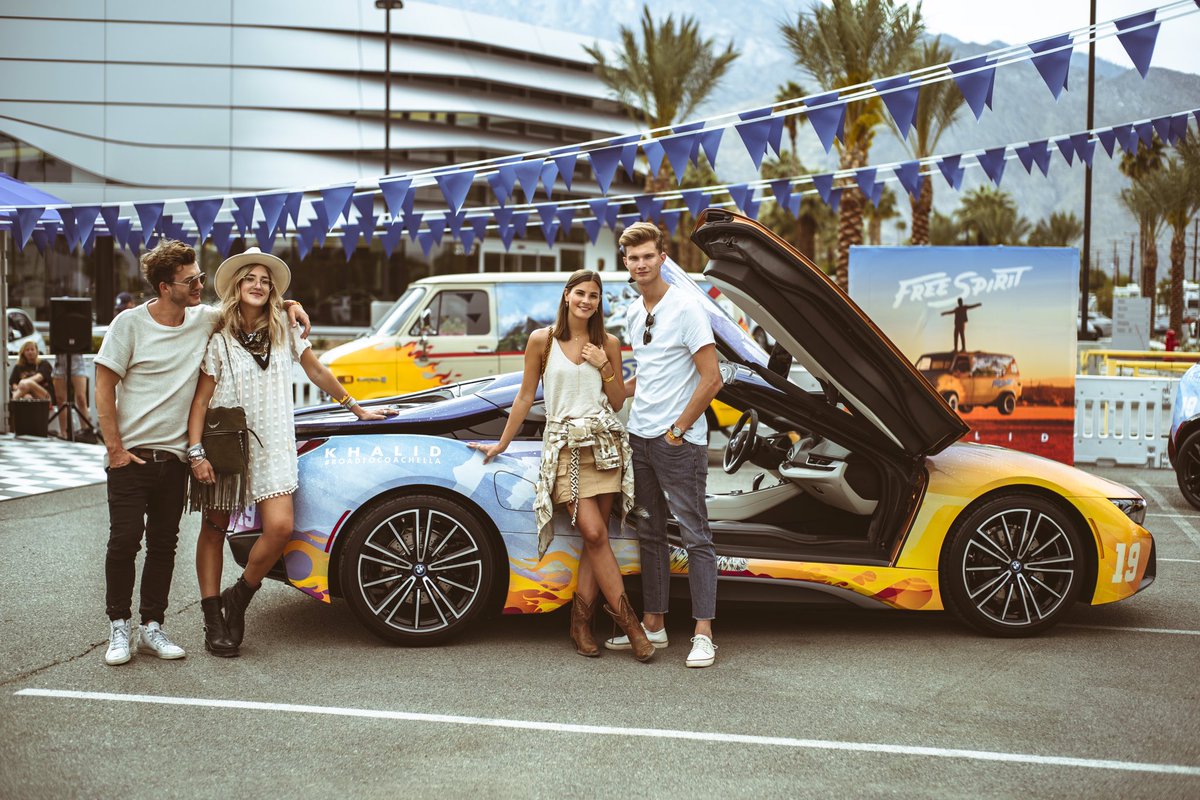 On Saturday, Khalid stopped by the Pitstop to meet his fans, take photos, and have a pit stop party with food, drinks, games, music, and custom embroidery of the Road to Coachella bandanas. 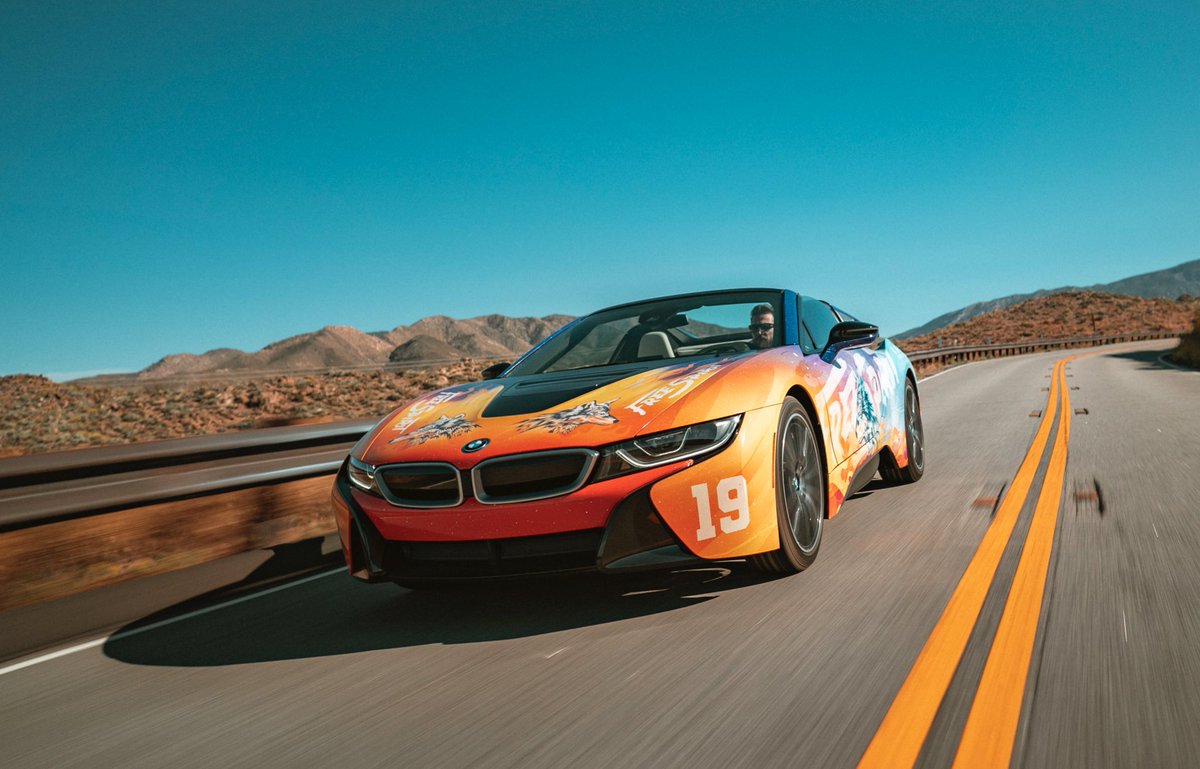 We also attended parties held in the Palm Desert area during Coachella Weekend 1. They aren’t officially affiliated with Coachella, but have become exclusive invite only like Neon Carnival, or sponsored day pool parties like KROQ House, AMEX Platinum House, and Lucky Brand and Rolling Stone party. 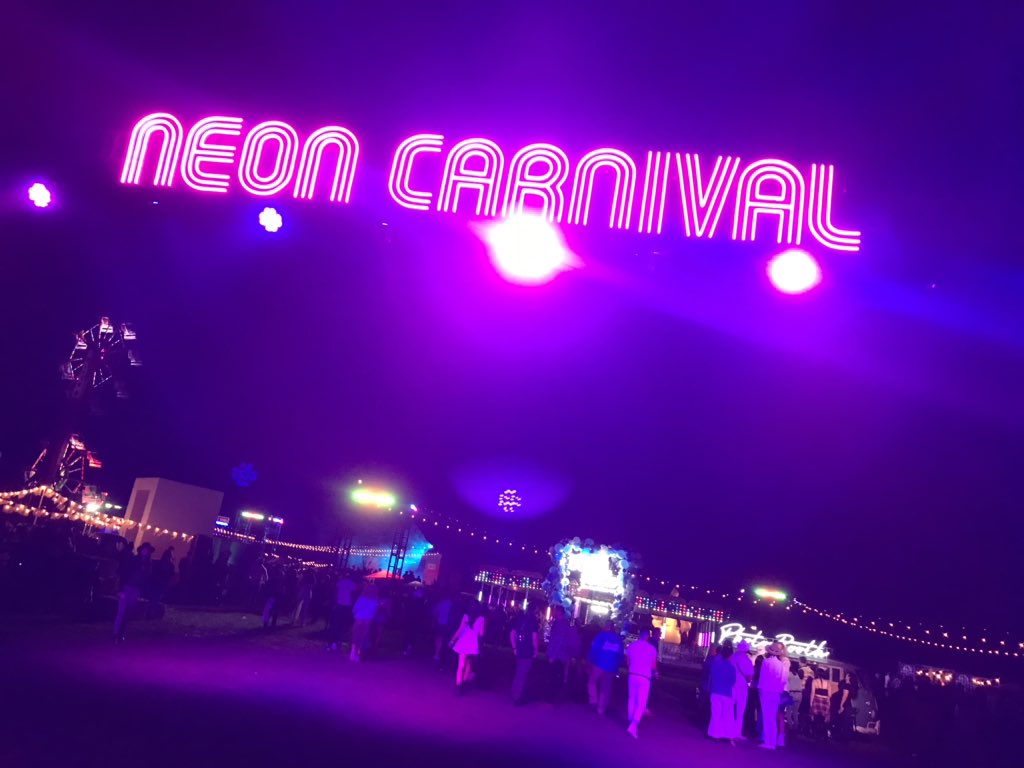 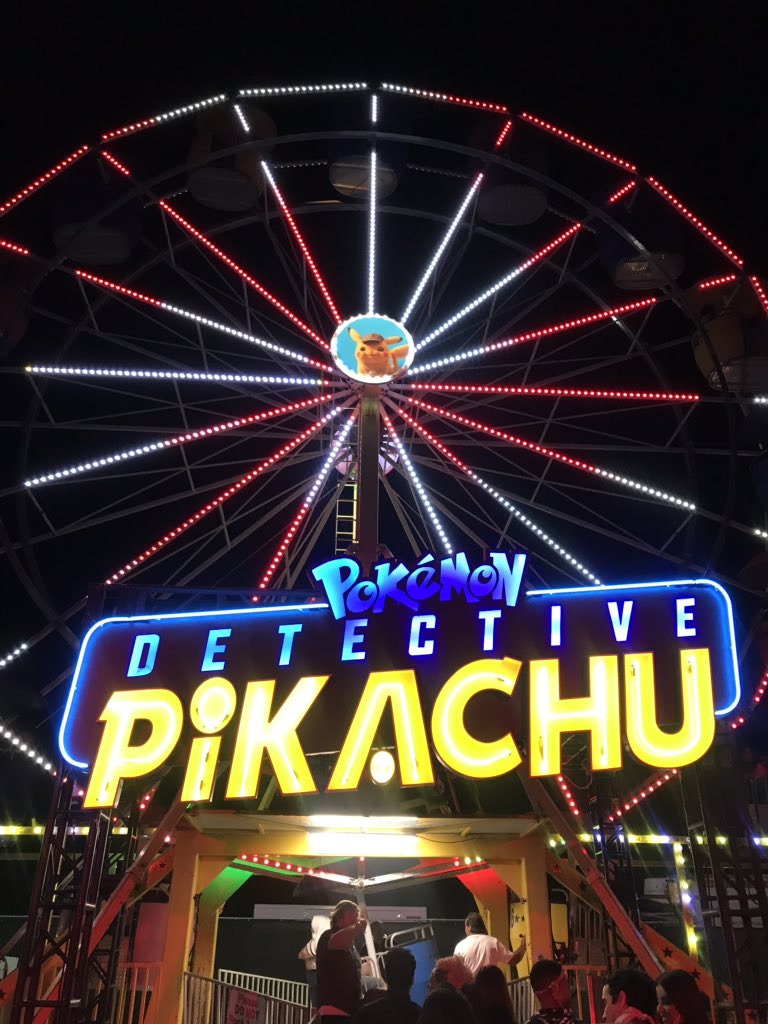 And attendees could take Pika Pics with a giant inflatable Pikachu. 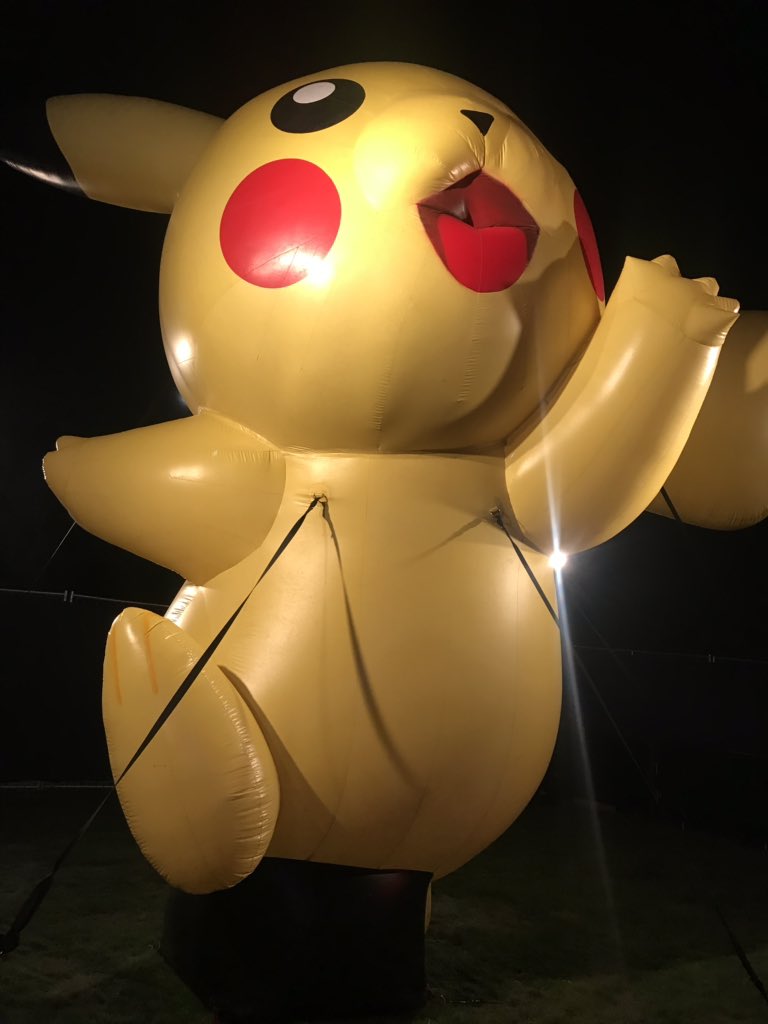 We didn’t see any Pikachu or other Pokemon plushes to win at the carnival games, and couldn’t get reception to see if there was a PokeStop at the venue. Anyone know? 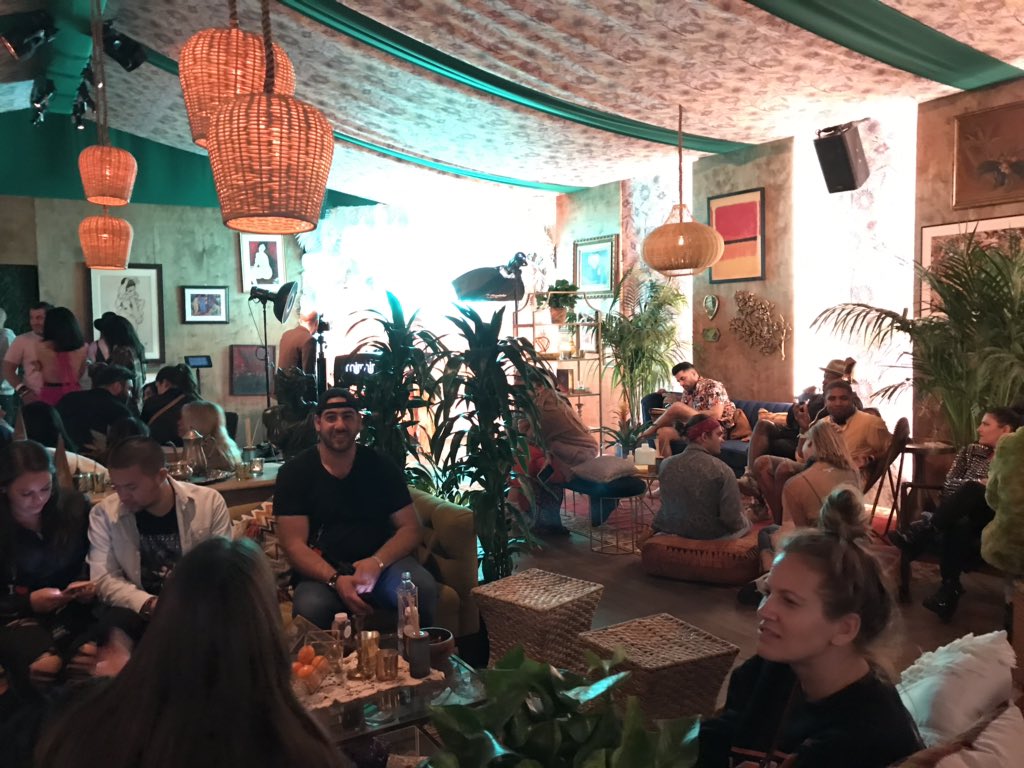 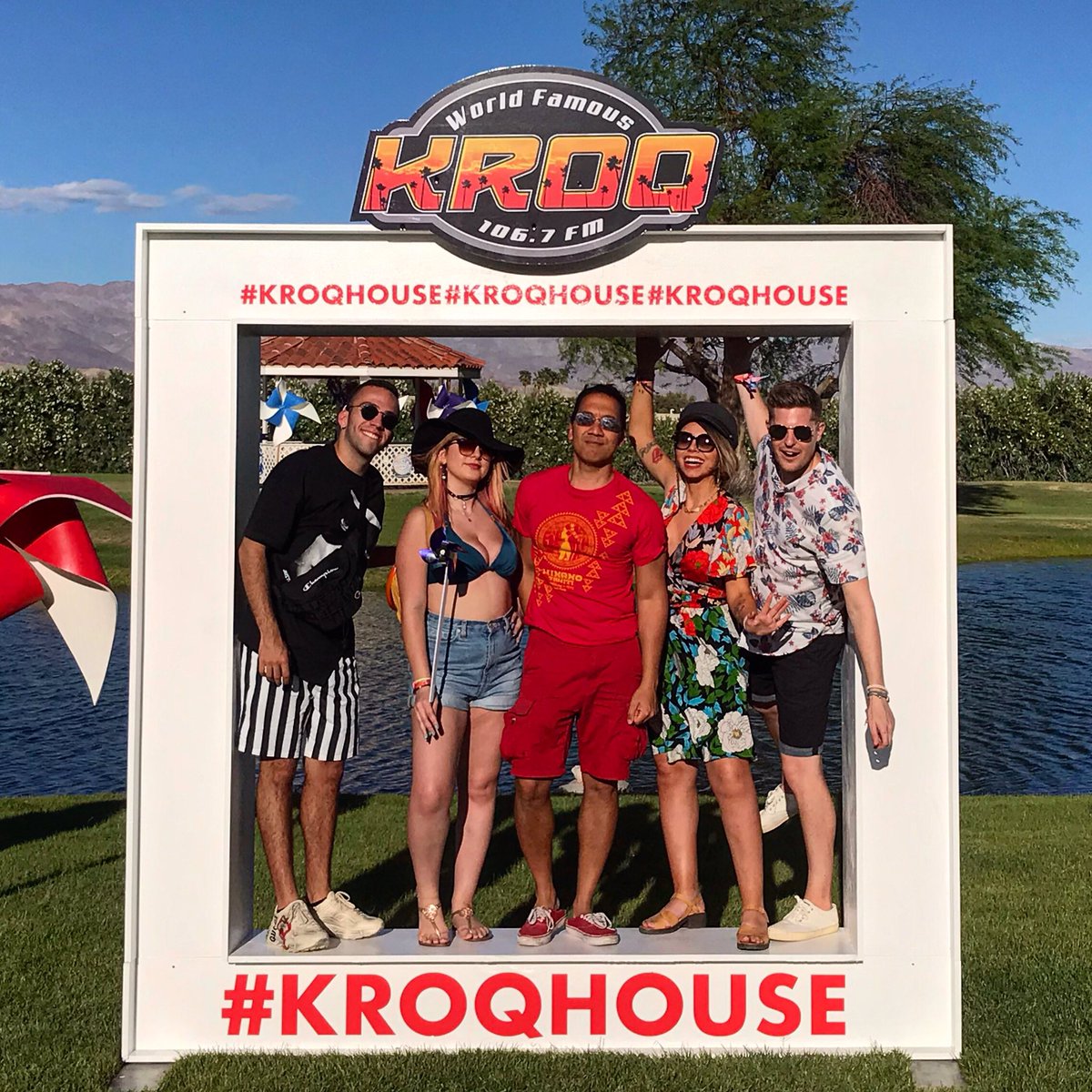 The LA -based Black Wolf Crystal Kids band performed, and dozens and more on the KROQ stage. 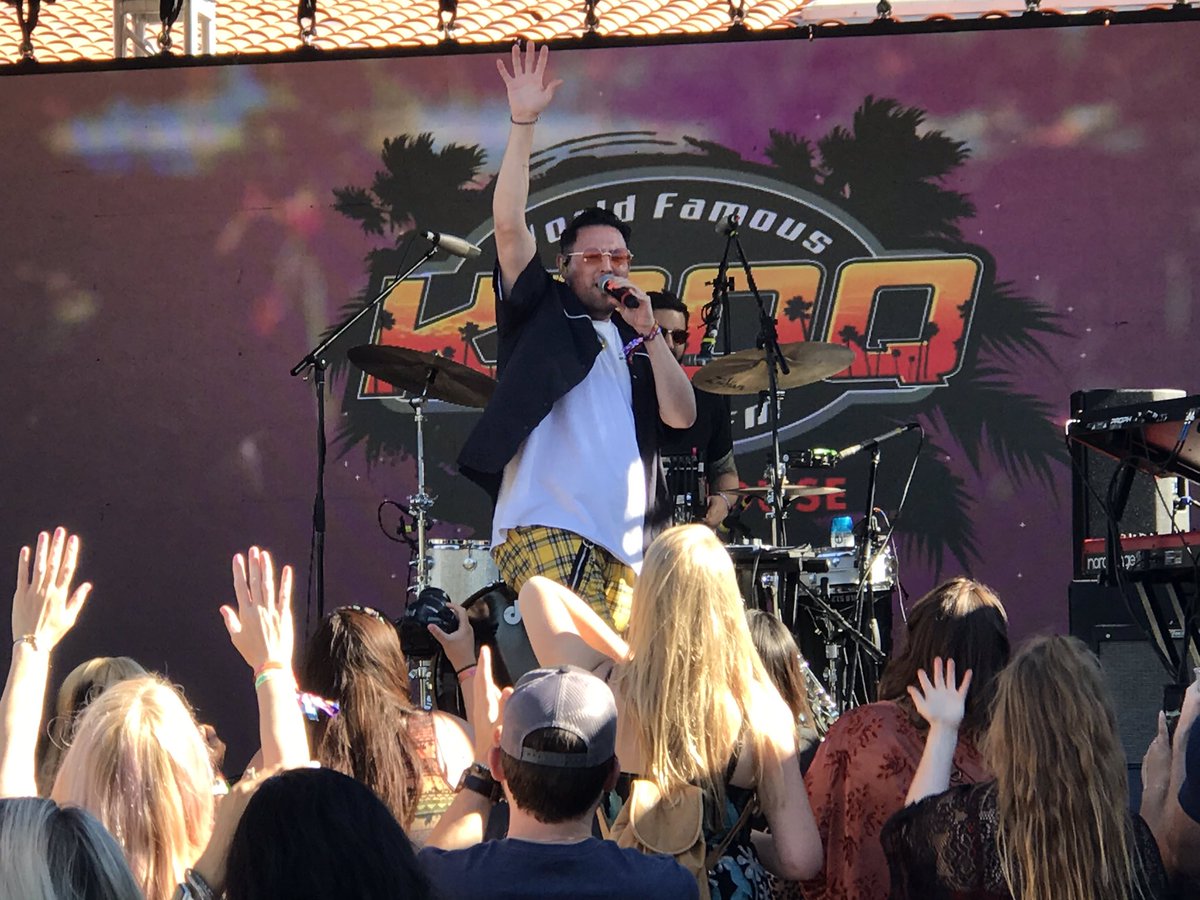 Attendees danced or watched from floaties in the pool. 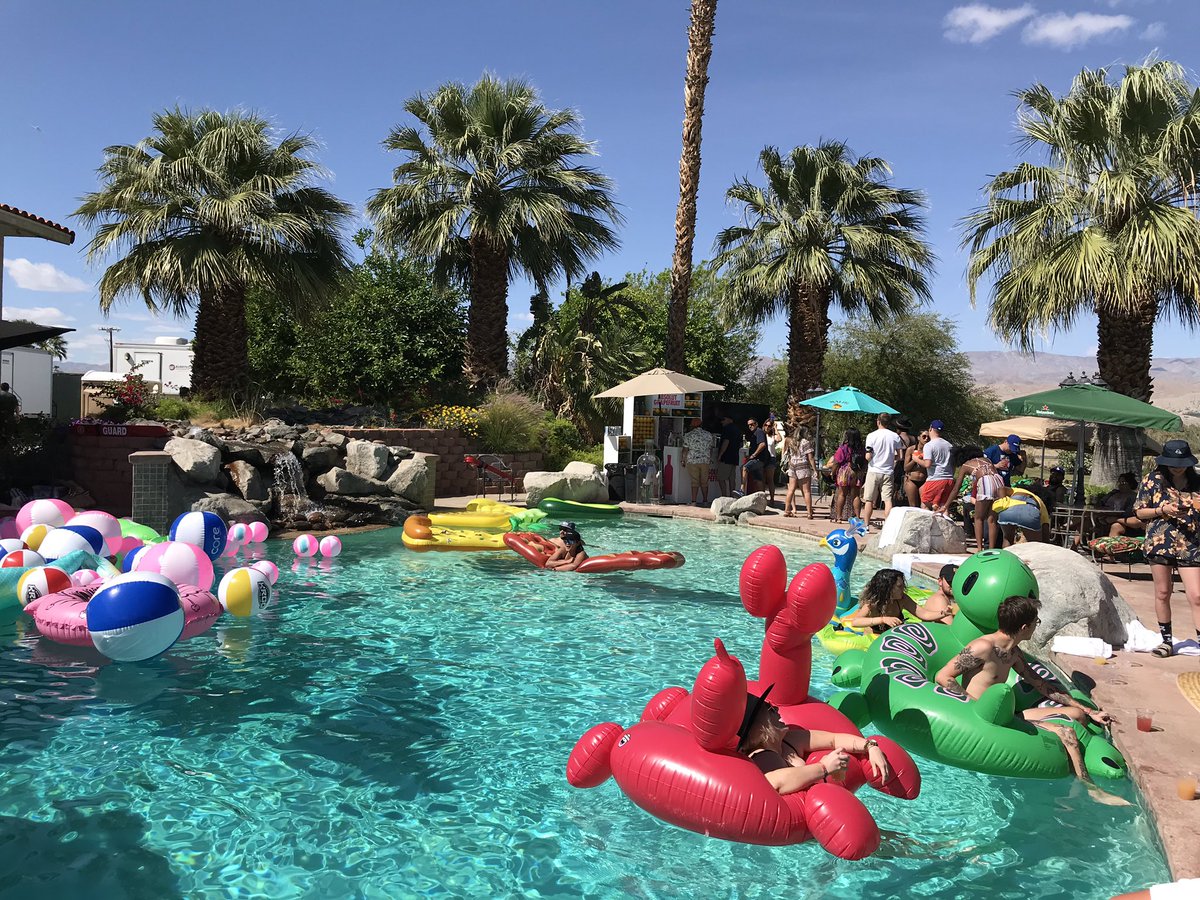 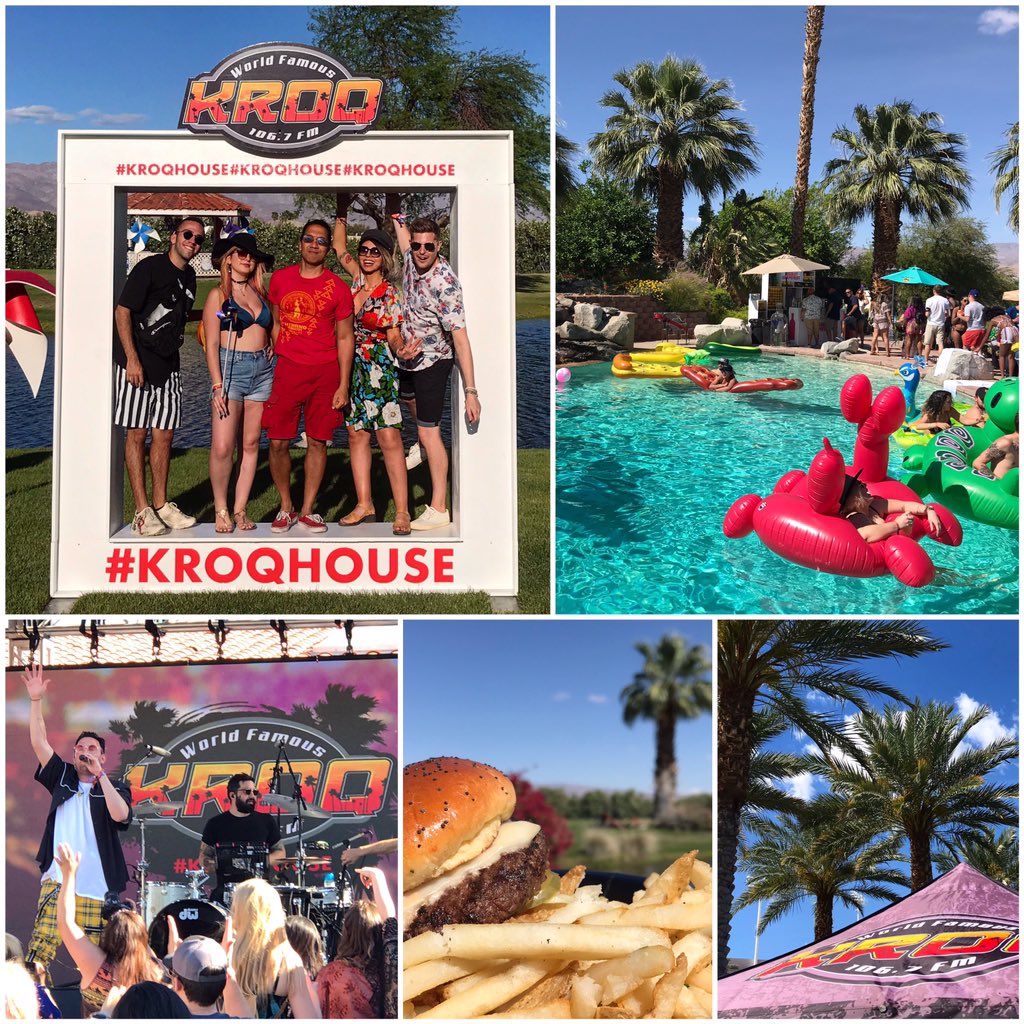 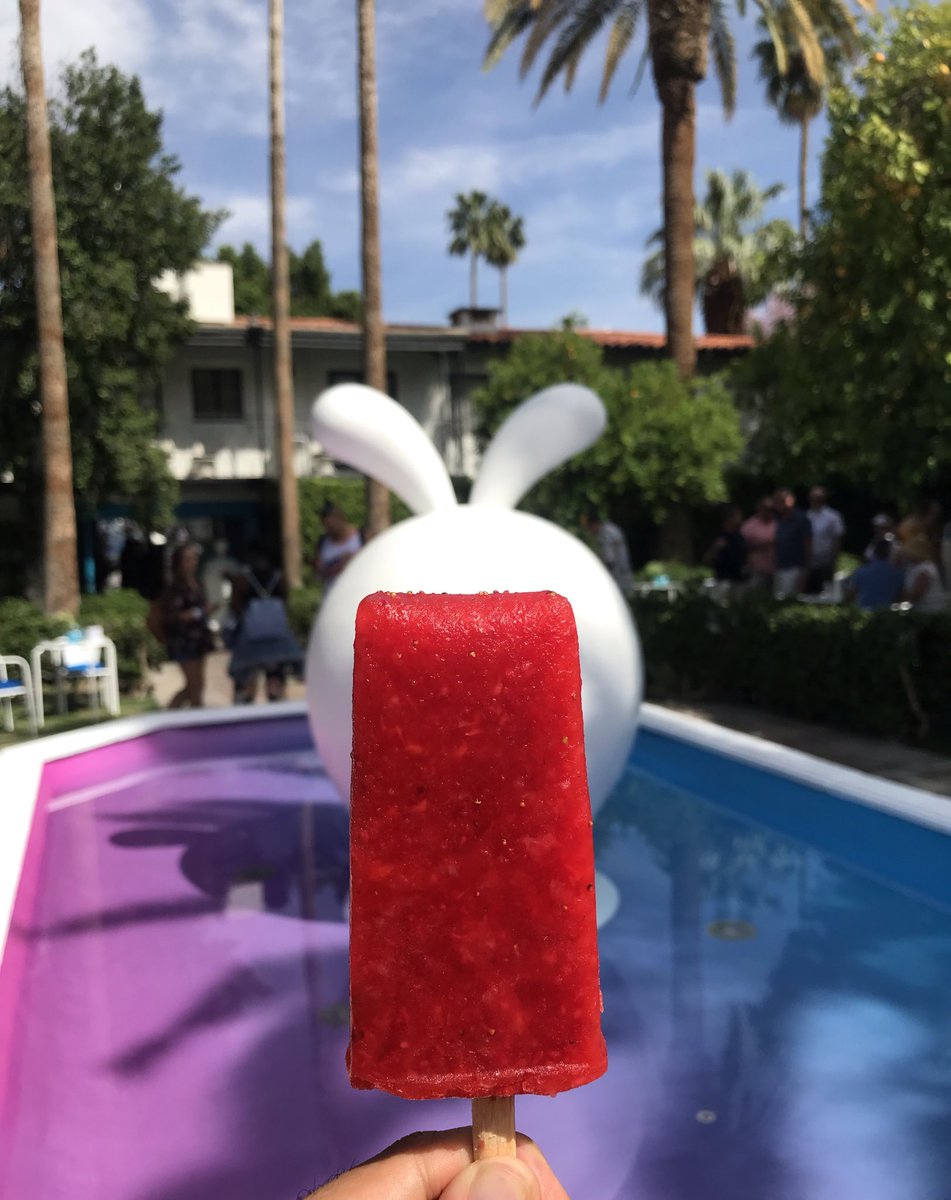 Attendees enjoyed DJ, poolside lounging, 15-min massages, passed appetizers and popsicles. Attendees relaxed in the color therapy lounge, where a rainbow of images was projected onto a wall of white stacked suitcases. Our crew of Digital LA attendees danced in the grass courtyard. 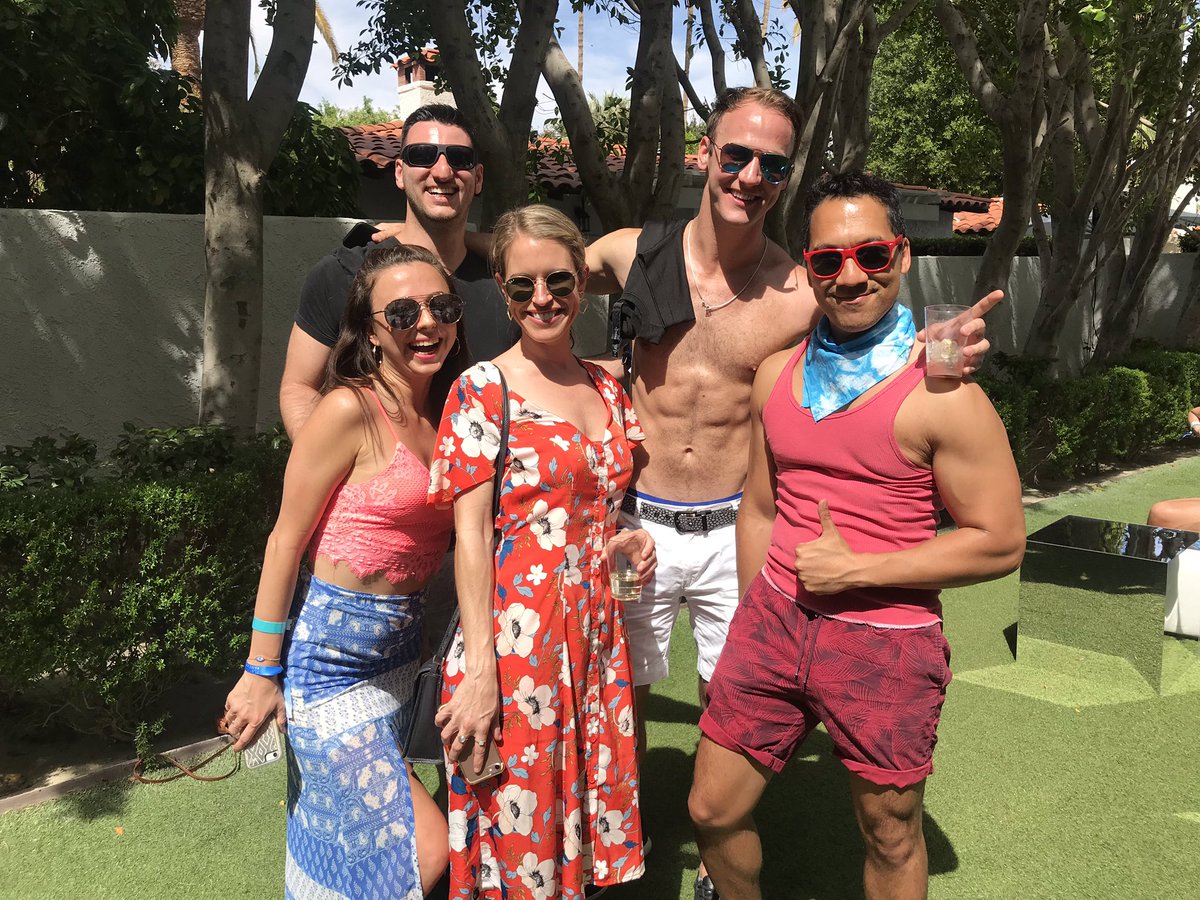 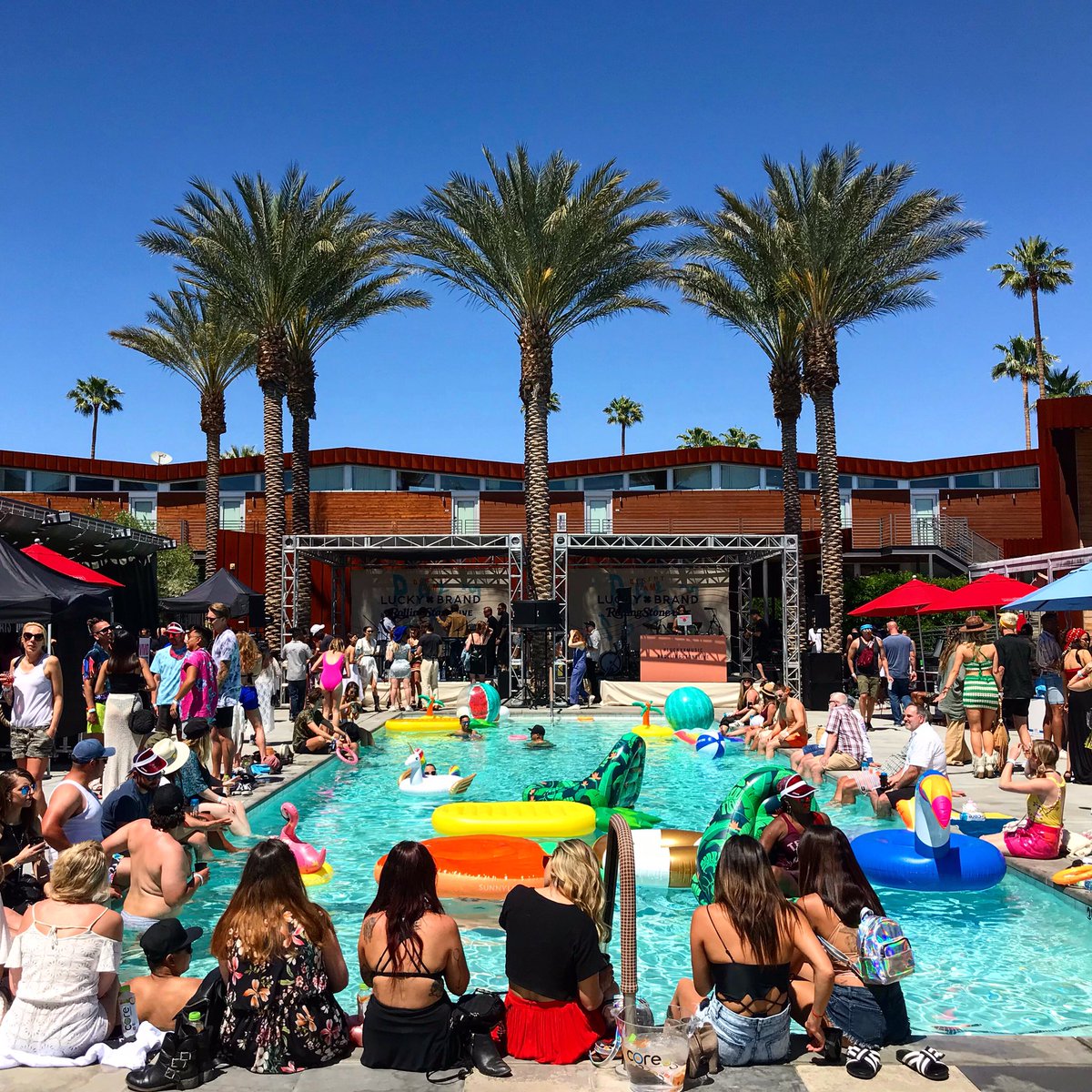 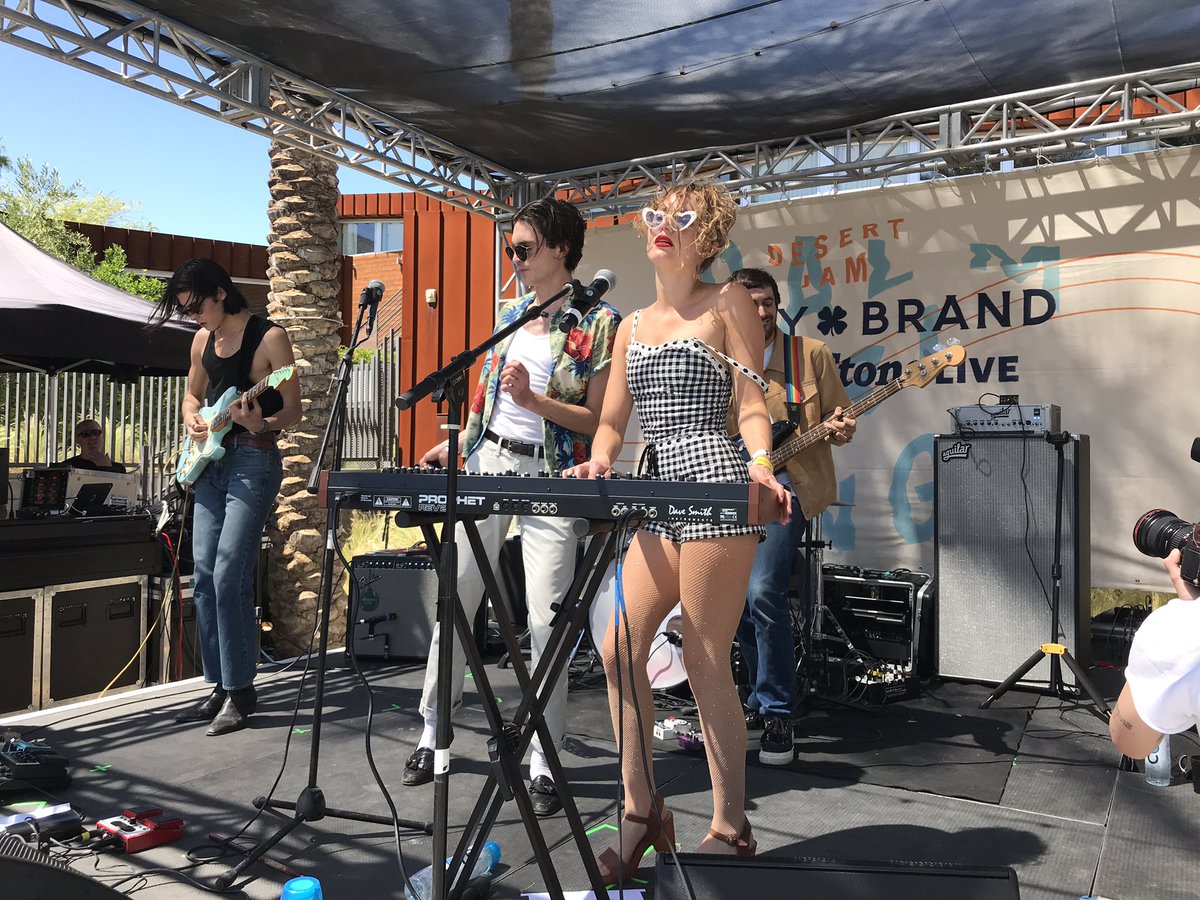 And DJs spun. DJ Tip: Inclued your Instagram on your laptop so attendees can tag you like, we did with DJ @lindsayluv! 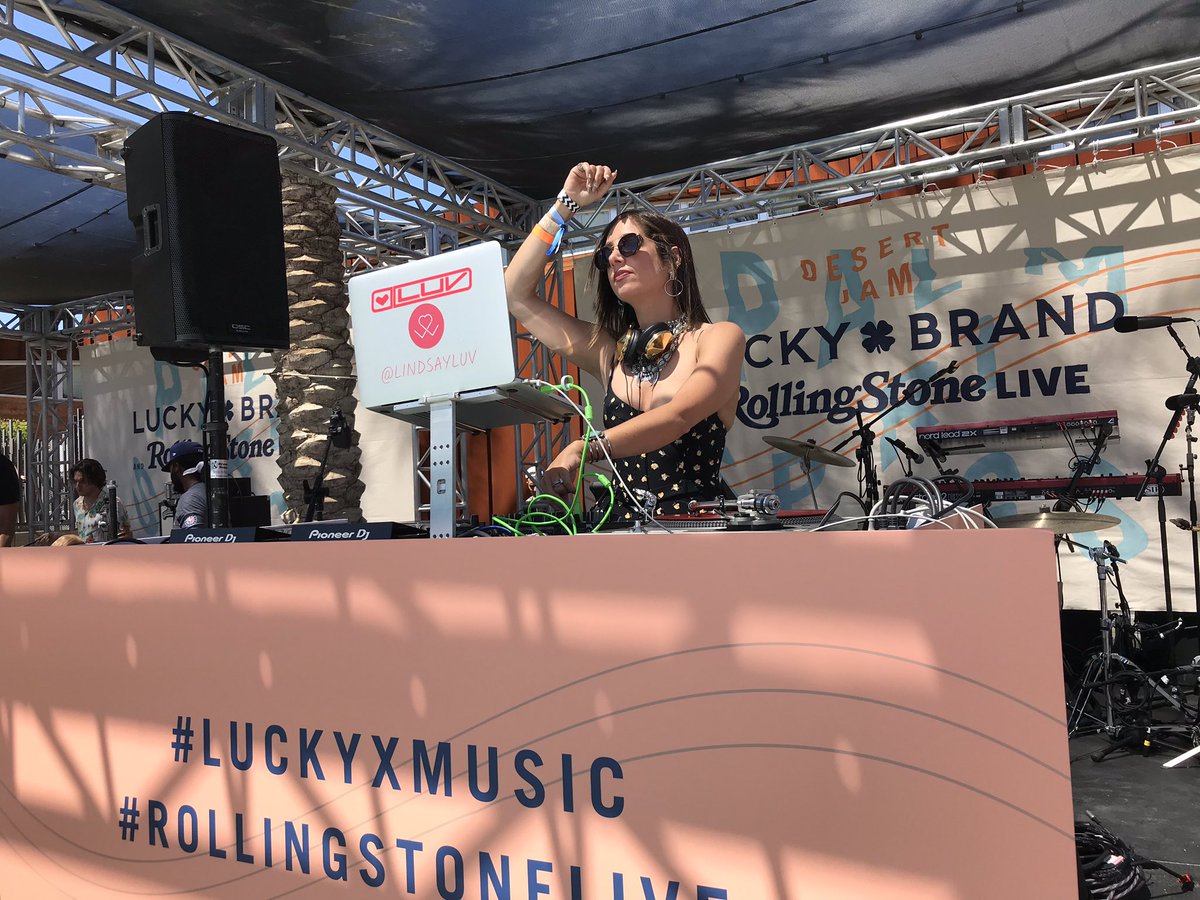