Jurassic World: Dominion unites the original cast and sequel cast to fight dinosaurs and other critters run amuk in the world. They’re not just on the island any more. 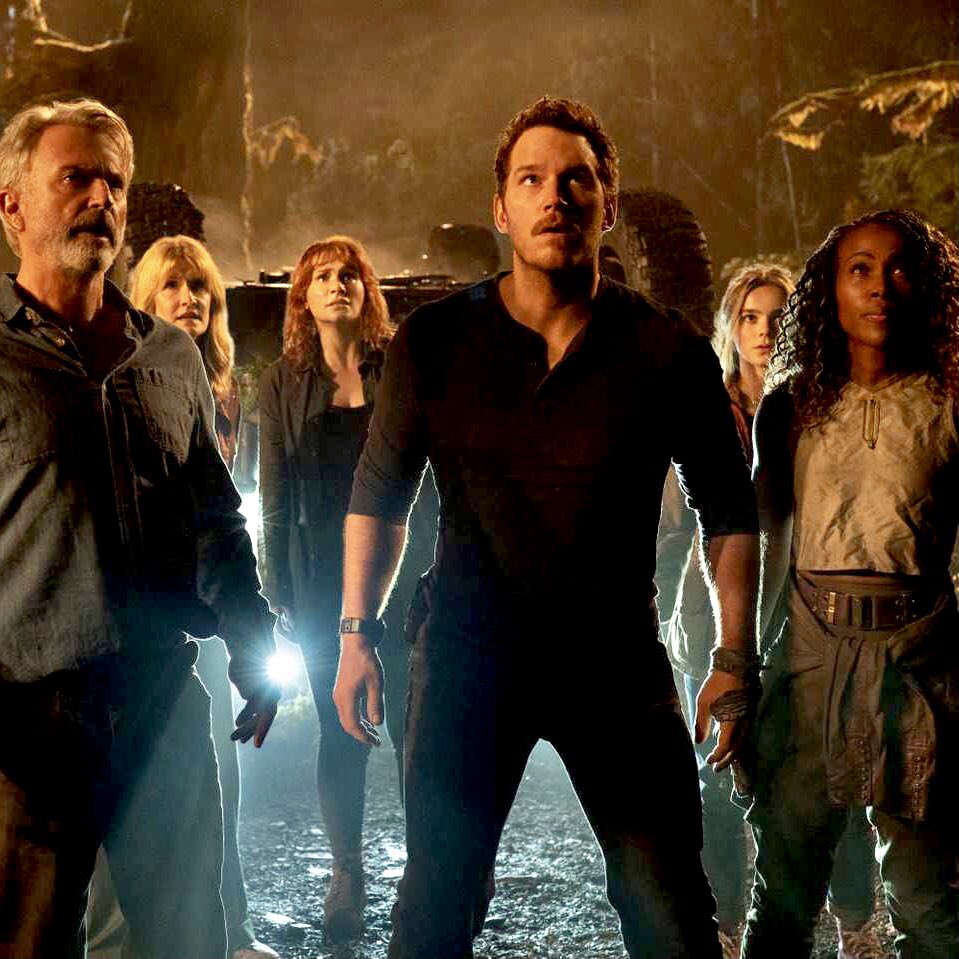 Jurassic World: Dominion continues the sequel’s story of what happens in a world where dinosaurs have escaped and can roam freely in our world. In some cases, dinosaurs adapt well, like a little girl feeding a small duck-sized dinosaur at a pond. In many cases, there is chaos as larger carnivorous dinosaurs indeed roam and seem to want to rule the Earth, running down city streets. Only other films where humans and dino lives together is the Flintstones, so it’s fun to see.

In the film, dino trainer Owen (Chris Pratt) and Claire (Bryce Dallas Howard) have secluded themselves in a cabin in the woods to raise cloned-child Maisie (Isabella Sermon), whose DNA holds a genetic key. Biosyn’s evil CEO Lewis (Campbell Scott) wants that key, and sends henchmen to kidnap Maisie, and Blue’s baby Beta too. Owen and Claire follow the kidnappers to Malta and meet a pilot Kayla (DeWanda Wise) who flies them to Biosyn HQ hidden in the mountains of Italy.

Meanwhile, Biosyn has also released giant locusts with cretaceous-DNA into fields in the Midwest, which are devouring crops and threatening the food chain. Dr. Ellie Sattler (Laura Dern) suspects Biosyn has gene-gineered the locusts. She persuades her old friend Alan Grant (Sam Neill) to join her to infiltrate Biosyn to capture one, under the guise of a friendly scientific invite from Malcolm (Jeff Goldblum). It’s a joy to see Ellie, Allen and Malcolm on screen together, with appropriate riffs of the Jurassic Park theme song sprinkled thru their first appearances individually and reunited again.

Once both casts are at Biosyn, they try to infiltrate it, capture a locust, help Maisie escape. They also find Dr. Henry Wu (BD Wong), who wants to redeem himself by undoing his locust genetic tinkering. Along the way, they encounter dinosaurs at every turn. 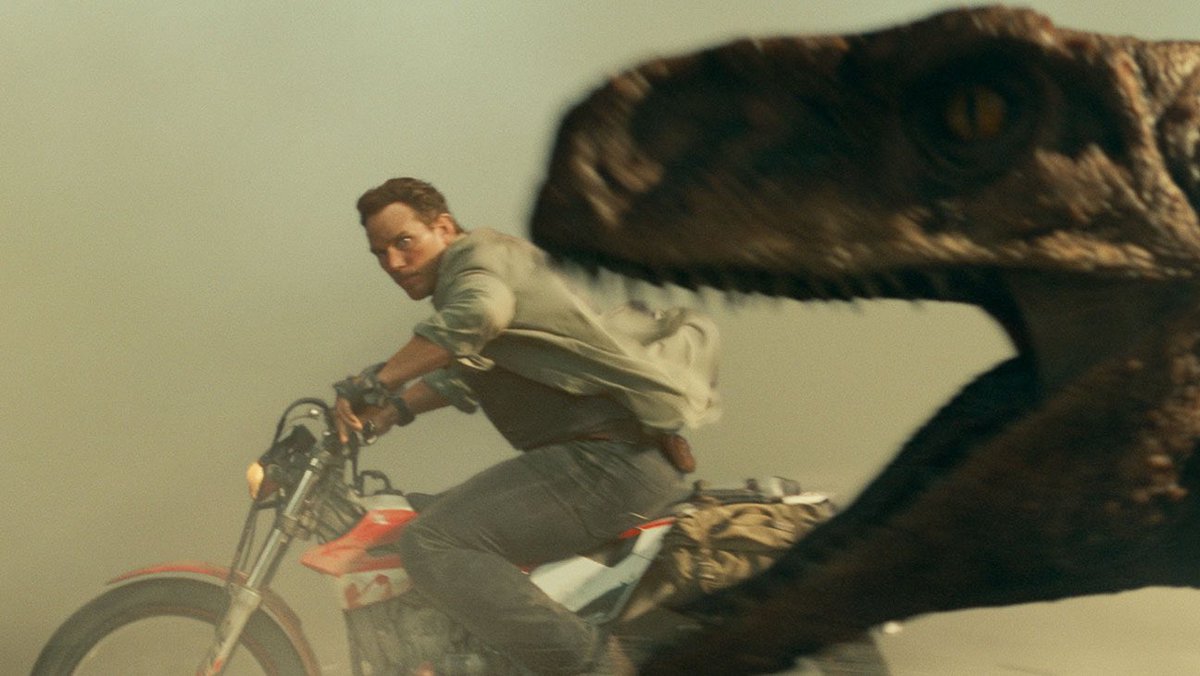 Action: Jurassic franchise fans wanna see dino action, so along the way, the original and sequel casts encounter dozens of dinosaurs large and small. There’s plenty of dino action, including running and jump scares, which the franchise is known for. In Malta, it’s fun to see raptors car chase Chris Pratt and Bryce Dallas thru the city- that’s never been seen before! At Biosyn HQ, returning and new dinosaurs lurk in every scene, including in the HQ buildings, forests, in the air and even in the water. T-Rex is back. Of course he faces off with fellow apex predator Giganotosaurus, the biggest carnivore that ever lived. Other new dinos include: red Pyroraptor which swims, and bird-like Therizinosaurus with three claws, which we like to nickname Wolverinasaurus. 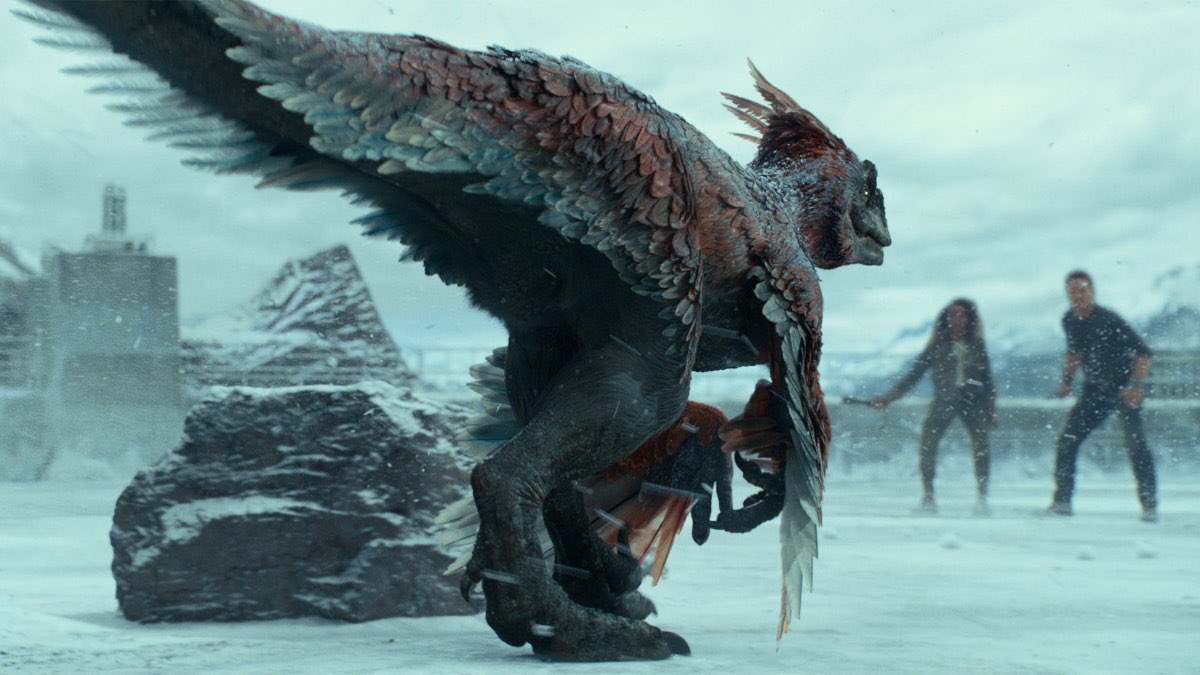 Story: it works well for both original and sequel casts be both drawn to Biosyn. Their chance arrival at the same time and meeting in the woods is a little remarkable, but works well enough. Unlike many decades-later franchises which either disrespect or kill off the original cast, or show them for just for a quick cameo at the very end, in Dominion, both casts equally share in screen time and help each other tis the very end. It’s fun to see the combined Scooby Doo crew help each other evade dino monsters together.

Acting. The returning cast do a terrific job reprising their roles. Laura Dern’s Ellie excels from recruiting Alan to infiltrate, hacking flying locusts, to cooing with adorable baby triceratops again, like she did in Jurassic Park. Jeff Goldblum is a pleasure on screen, spouting scientific theories or cracking jokes as needed comic relief. New actors help round out the cast. DeWanda Wise’s pilot Kayla is a no-nonsense pilot-for-hire (much like Han Solo), and more action-oriented than the other female characters scientist Ellie Sattler, and ex-corporate exec Claire. Her moves parallel Owen’s. Isabella Sermon does a good job playing teen Maisie with agency. She escapes the lab on her own, and learns Owen’s trick of palm-out, eye-gaze to keep baby Blue Beta at bay. Campbell Scott’s Lewis plays a good socially awkward and power-hungry crazed unethical biotech CEO. His #2 Mamoudou Athie’s Ramsey is his ethical level-headed counter.

VFX. The Visual effects, mostly by ILM, are excellent. VFX teams have had lots of practice doing dinosaurs with the previous films in this franchise. Many of the close up dinos were animatronic live action, which helps with realism and human reactions. The only issue here is several times when the human actors react to large VFX dinos with the same look of awe or fear, instead of outright panic or terror. In several group shots especially, it feels like the actors are told to ‘act scared to something and look here’ in unison. 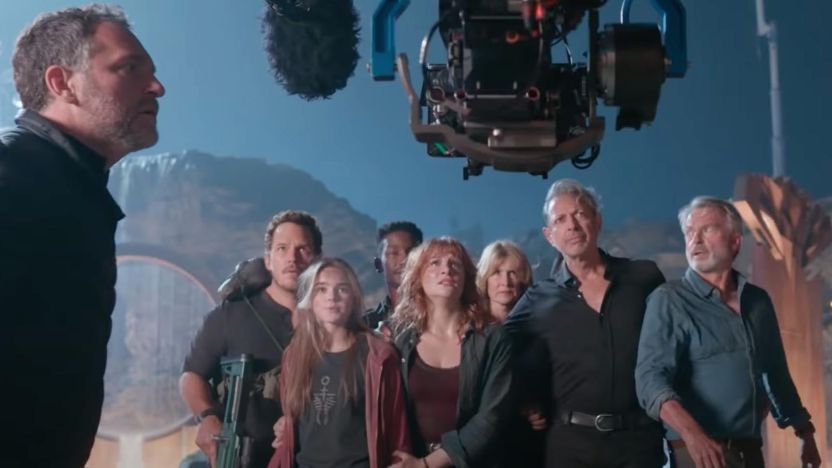 Tropes. Dominion shares some tropes with other summer films.
– Teen Girl MacGuffin. Maisie the teenage girl with altered DNA is the MacGuffin object to get in Dominon, paralleling America Chavez the teenage girl with dimension-traveling powers to get in Doctor Strange in the Multiverse of Madness. While both these teens have some agency by the end of the film, they are both chased, kidnapped, captured, and need to be rescued. Victimizing teenage girls is not an admirable story trend.

We saw it at the TCL Chinese Theatres in IMAX – dinosaurs look HUGE on its huge IMAX screen, and the sound of dinosaurs stomping and roaring in Dolby is excellent – adds to the experience.

Overall, it’s a fun summer blockbuster popcorn film. The familiar cast and dino action are a big enough nostalgia-viewing post-pandemic draw to bring people back into the theaters. There are nice callbacks to the original films, yet moving things forward with new dinosaurs, characters and character arcs. 7 of 10.