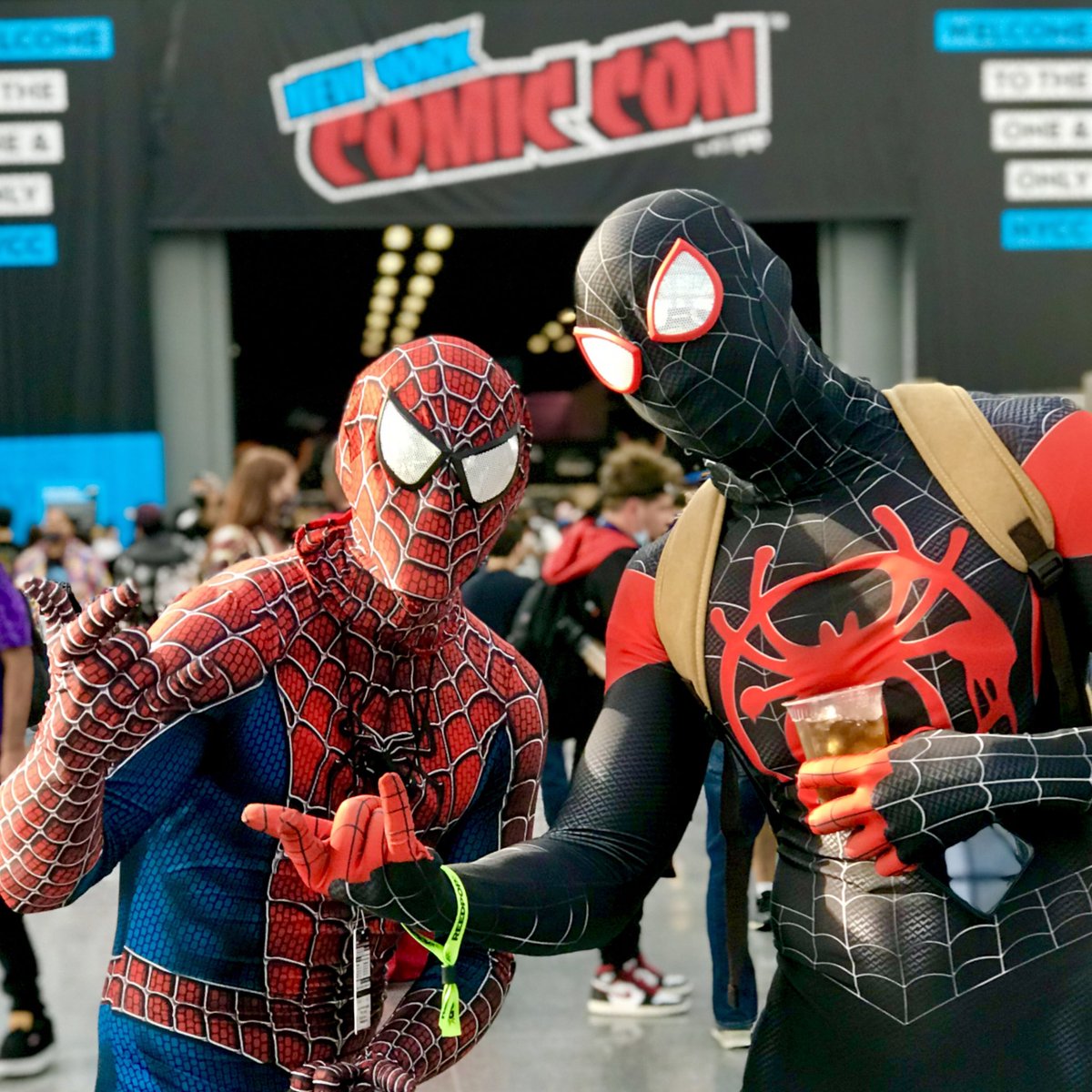 Smaller crowds resulted in some benefits, several attendees commented on Twitter and the official NYCC Facebook group. There were fewer sold out shows, and shorter lines for registration, entry gates, panels, and food court vendors. And easier to walk around the convention hall and show floor without getting whacked by wings or other cosplay accessories. Attendees had to show vax-proof to attend, and wear masks indoors. Several panels were held virtually. 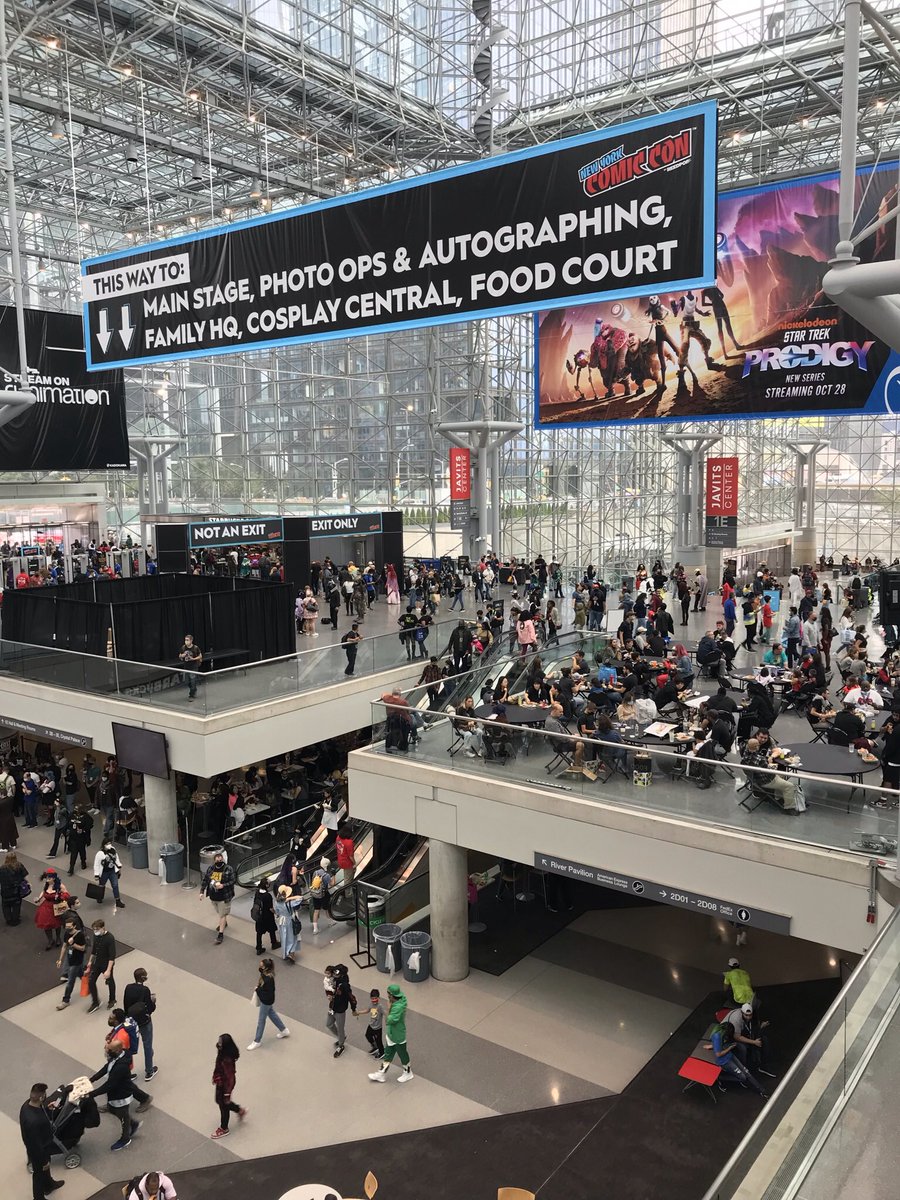 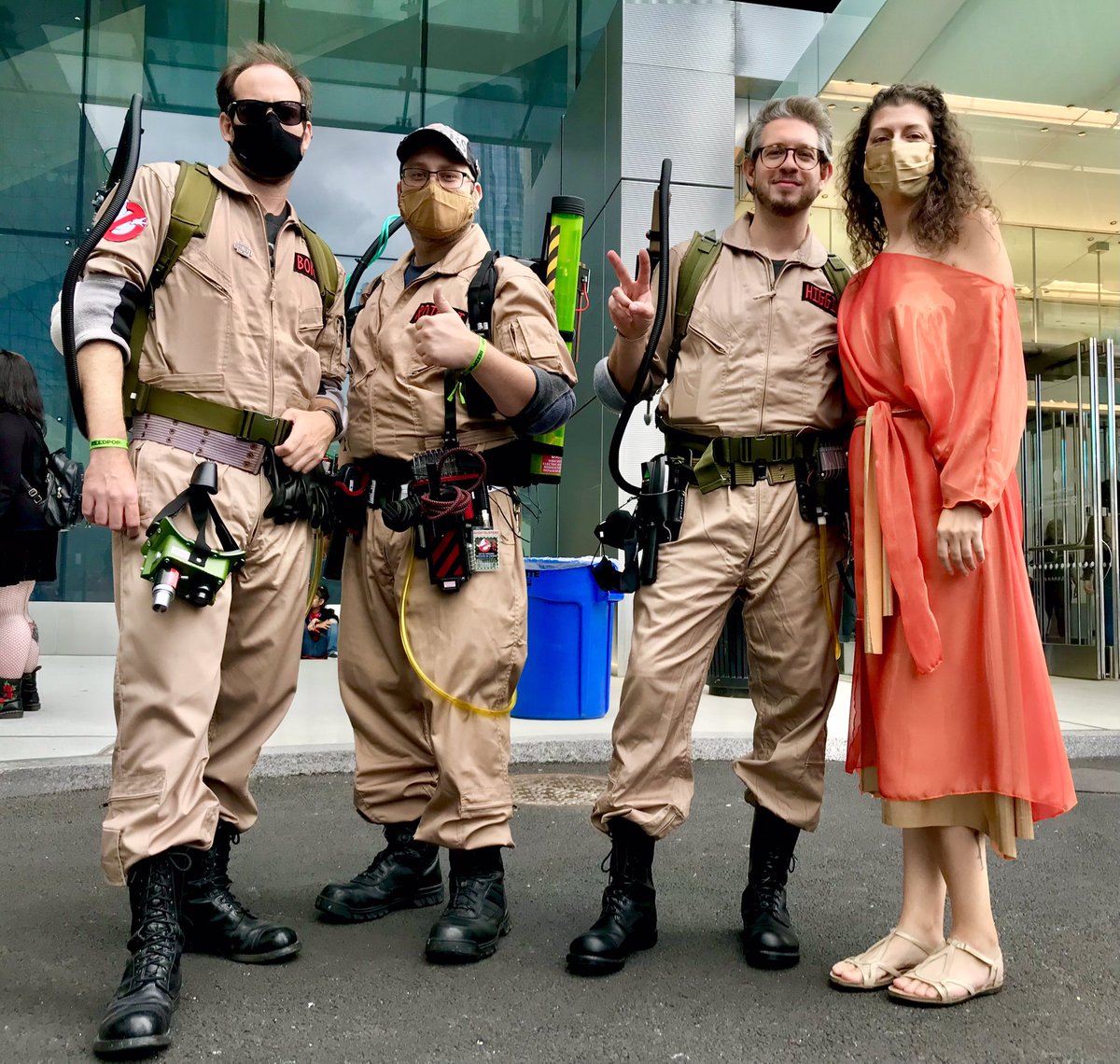 William Shatner took the stage on Thursday to hang out with fans, and talk about his upcoming space walk. It’s very appropriate and symbolic for Shatner, best known as Star Trek’s Captain Kirk, to go on a civilian space walk. At 90 years old, he’s the oldest person to boldly go where few have gone before. On the NYCC stage, he said he was a little nervous with space jitters before his jaunt on the Blue Onion less than a week later on October 13.

Afterwards, he said that his short 10 minutes in space “moved me to tears” and changed him profoundly. “I was overwhelmed with the experience.” He said breaking breaking through the thin onion layer of the Earth’s atmosphere at 5Gs, and thrust into  the darkness of space represnting death, he looked down to see the blue orb of Earth representing life, making him further realize the importance of protecting our fragile planet Earth and environment. 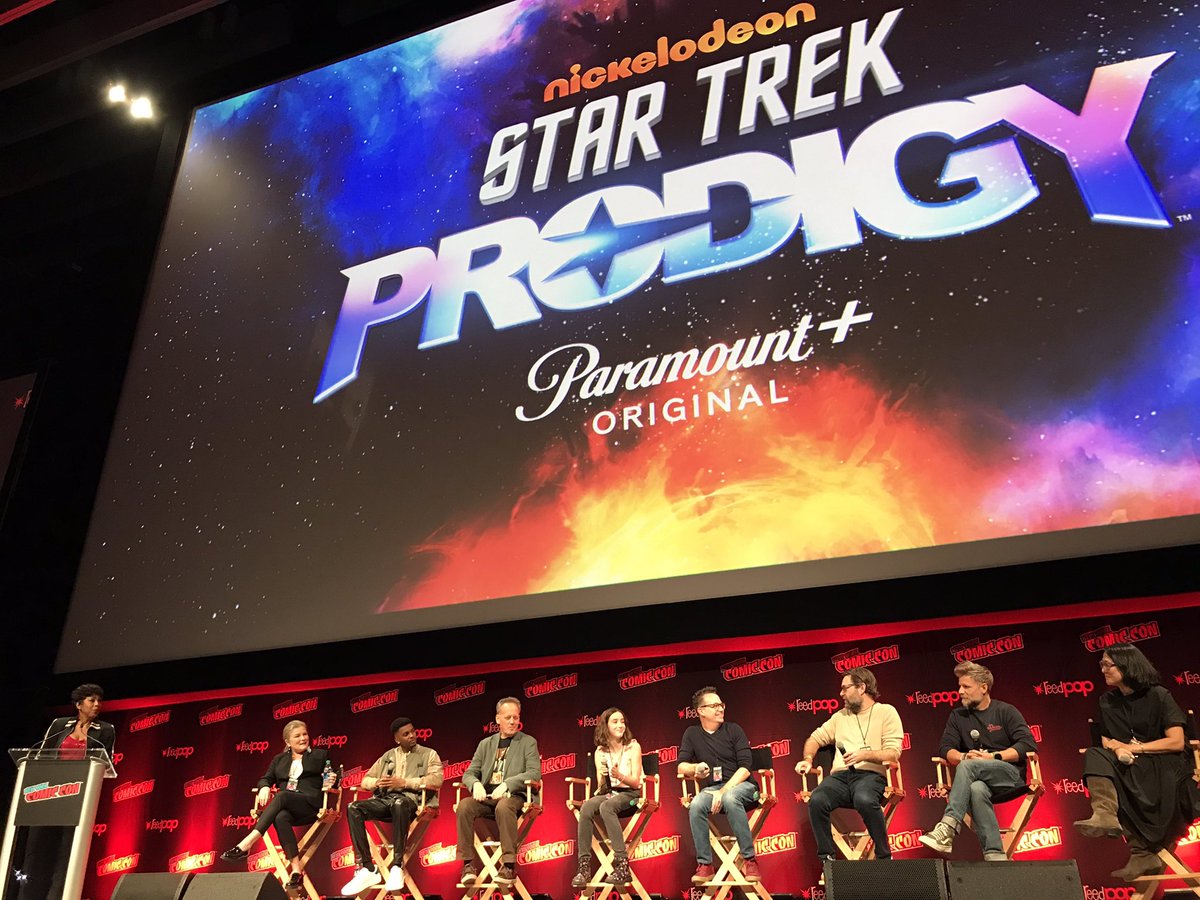 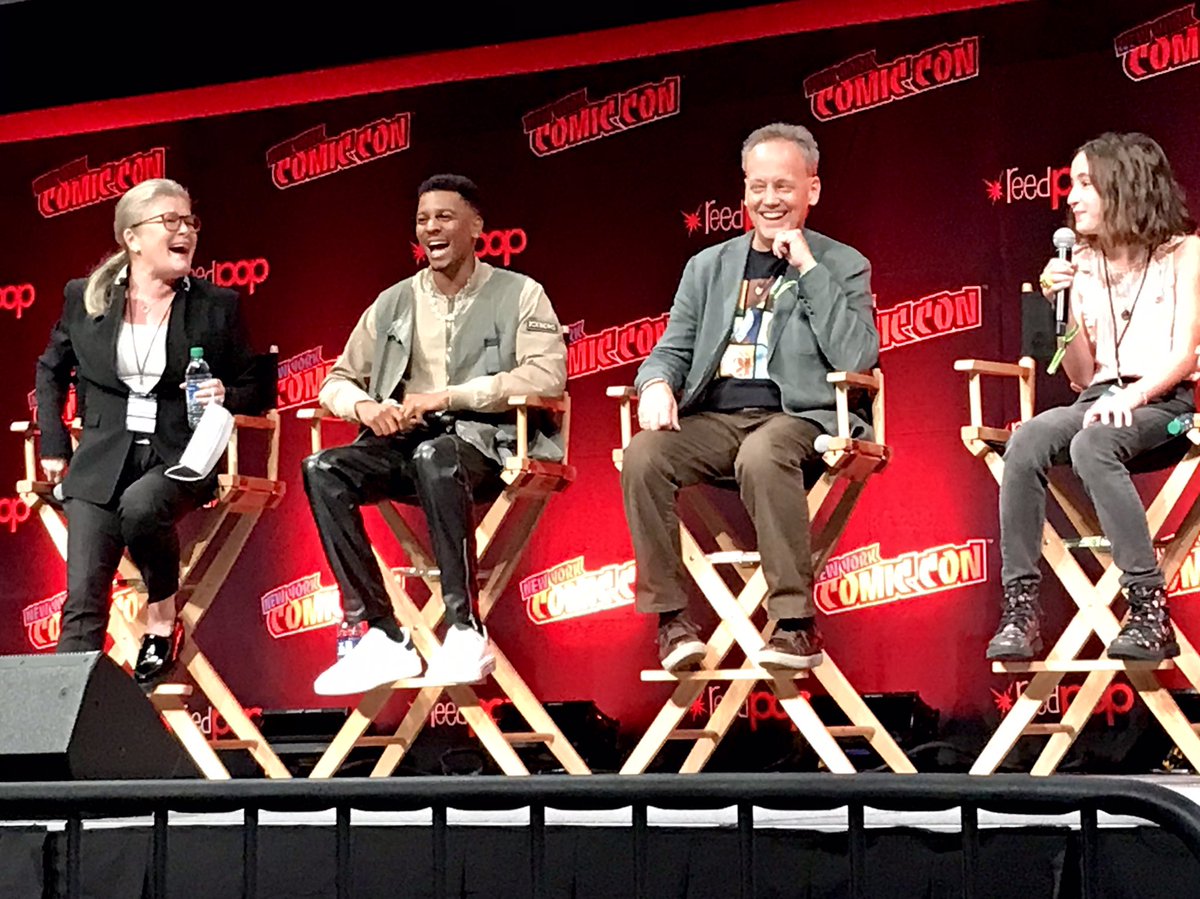 At the panel, the show creators said they wanted to create a Star Trek series for kids and new audiences not familiar with all the Star Trek lore and history to enjoy. Kate Mulgrew said she was thrilled to be a part of the show to reach both kids and adult fans and help them explore the world of Star Trek. 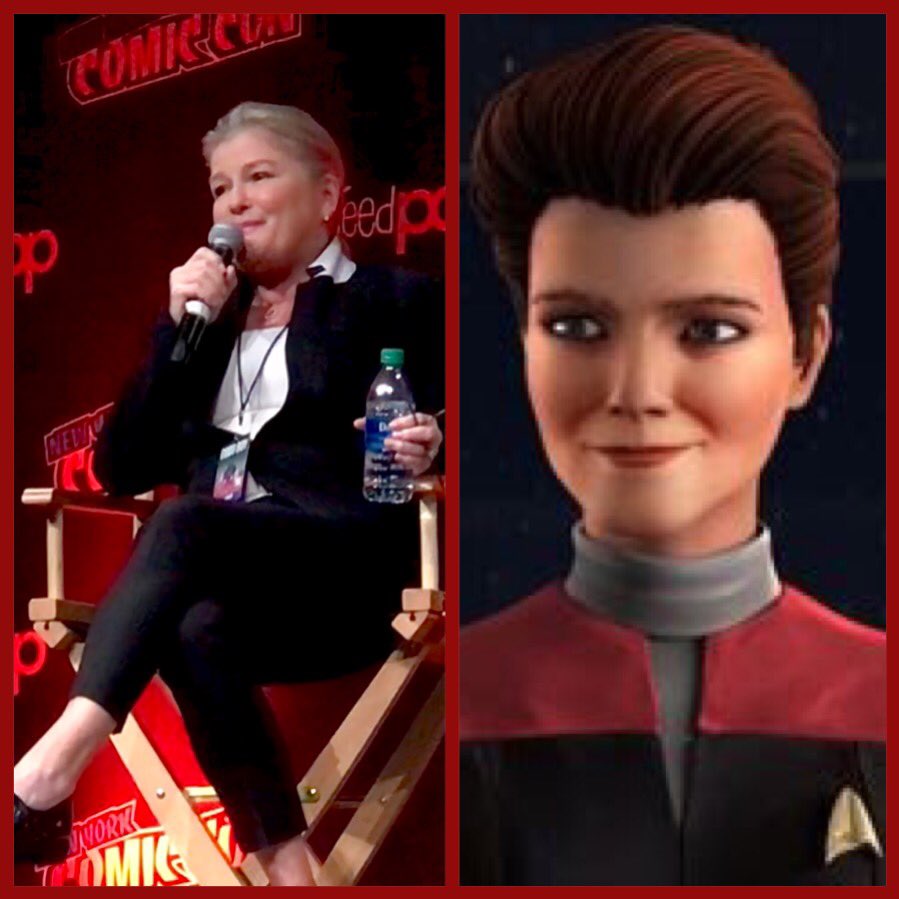 Star Trek: Prodigy was featured at the Paramount+ booth at an entrance to the show floor, where attendees could sit in the captains chair, to be digitally interested into a photo with the animated cast. 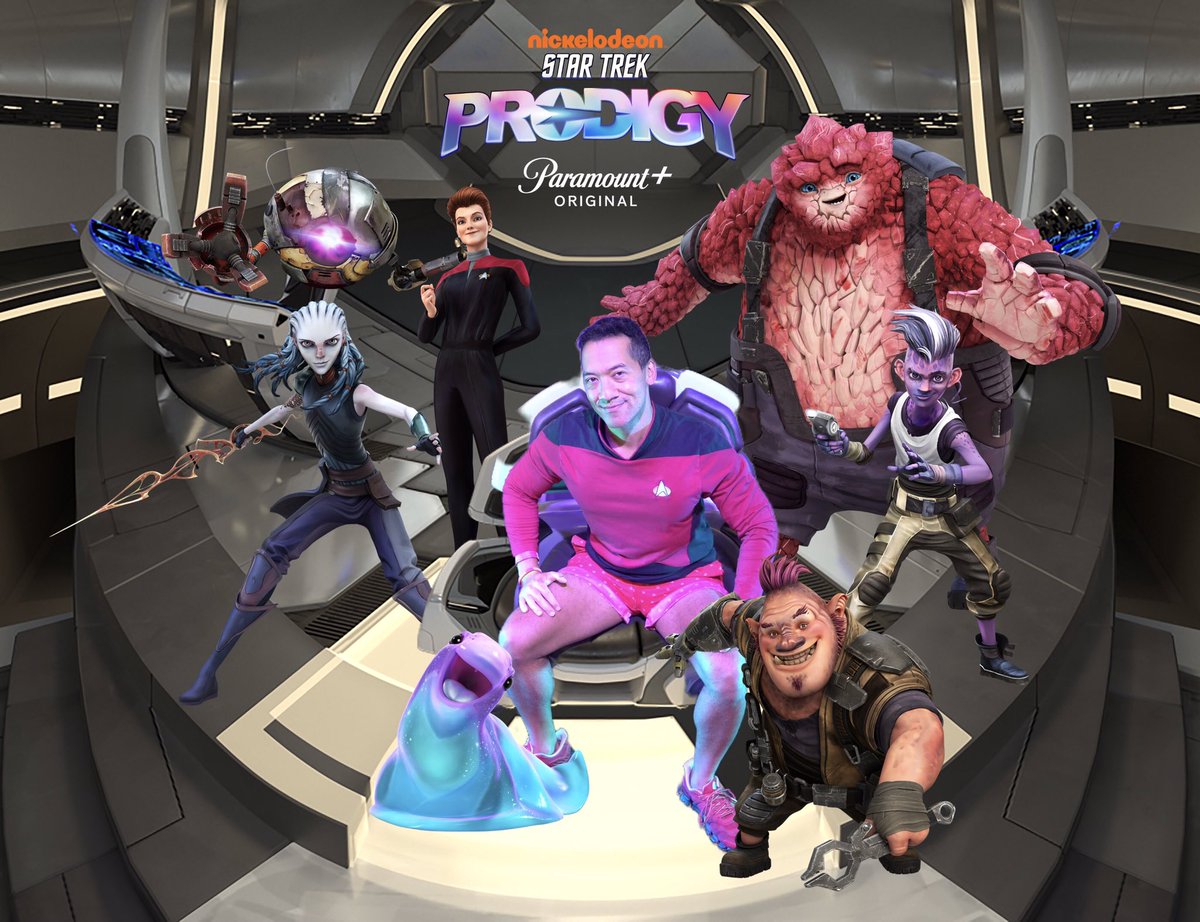 Fans could also use their arms to play three gesture-controlled space-themed video games. 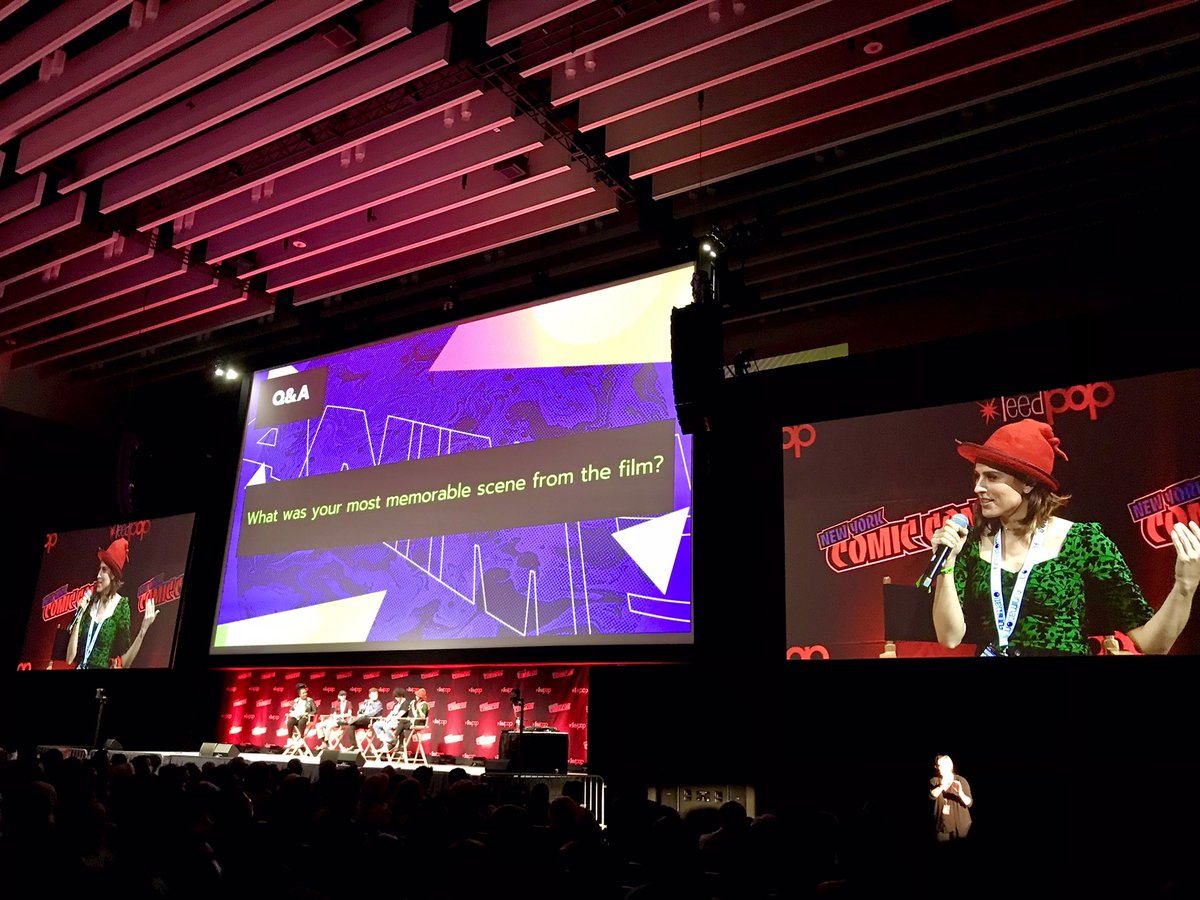 The cast of Demon Slayer: Mugen Train discussed the film and incredible fan support on the Empire Stage. The movie which was released in theaters in 2020 streams online on Funimation on October 10. 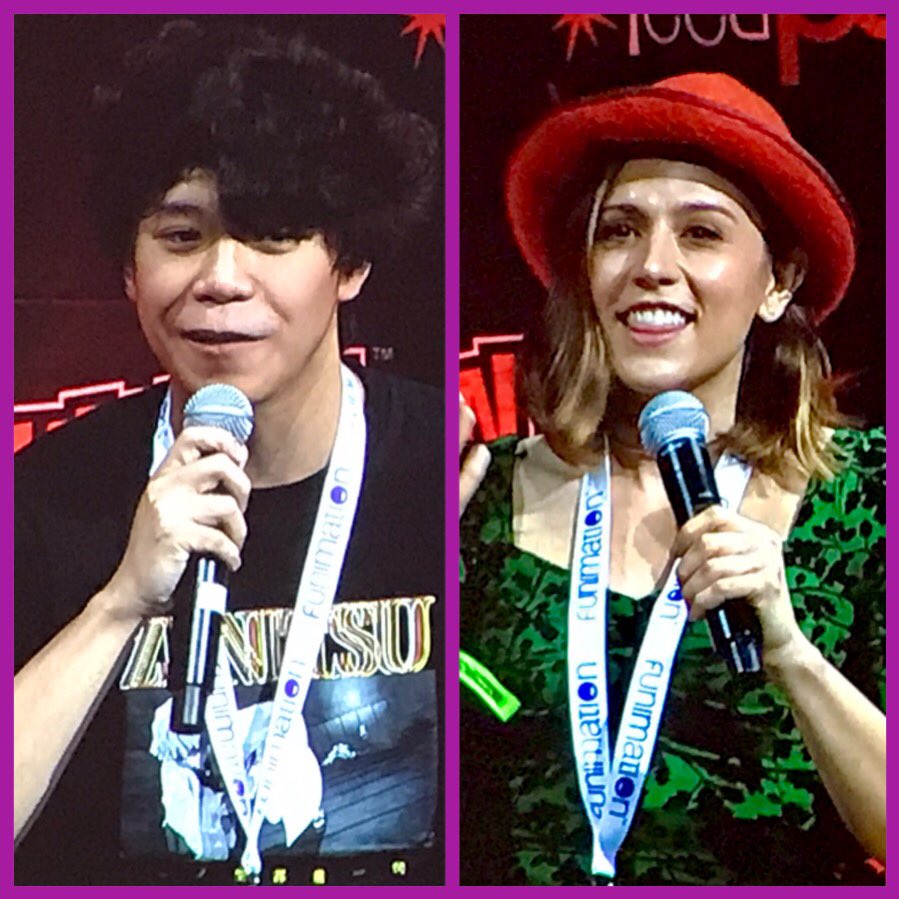 Fans attended dozens of panels every day in 16 tracks, from Film/TV, Anime, and more to Broadway and Wrestling.

Chris Claremont. X-Men legend writer Chris Claremont, known for writing the X-Men’s favorite storylines and characters, answered fan questions at a panel. He said that Storm has always been strong, from her scrappy street-thief youth, to goddess of weather, to powerless punk Storm team leader. He was also asked what film adaptation of his stories was the worst. He responded: “Well, there’s X3” and Age of Apocalypse: “If at first you don’t succeed, you can F it up again.’ 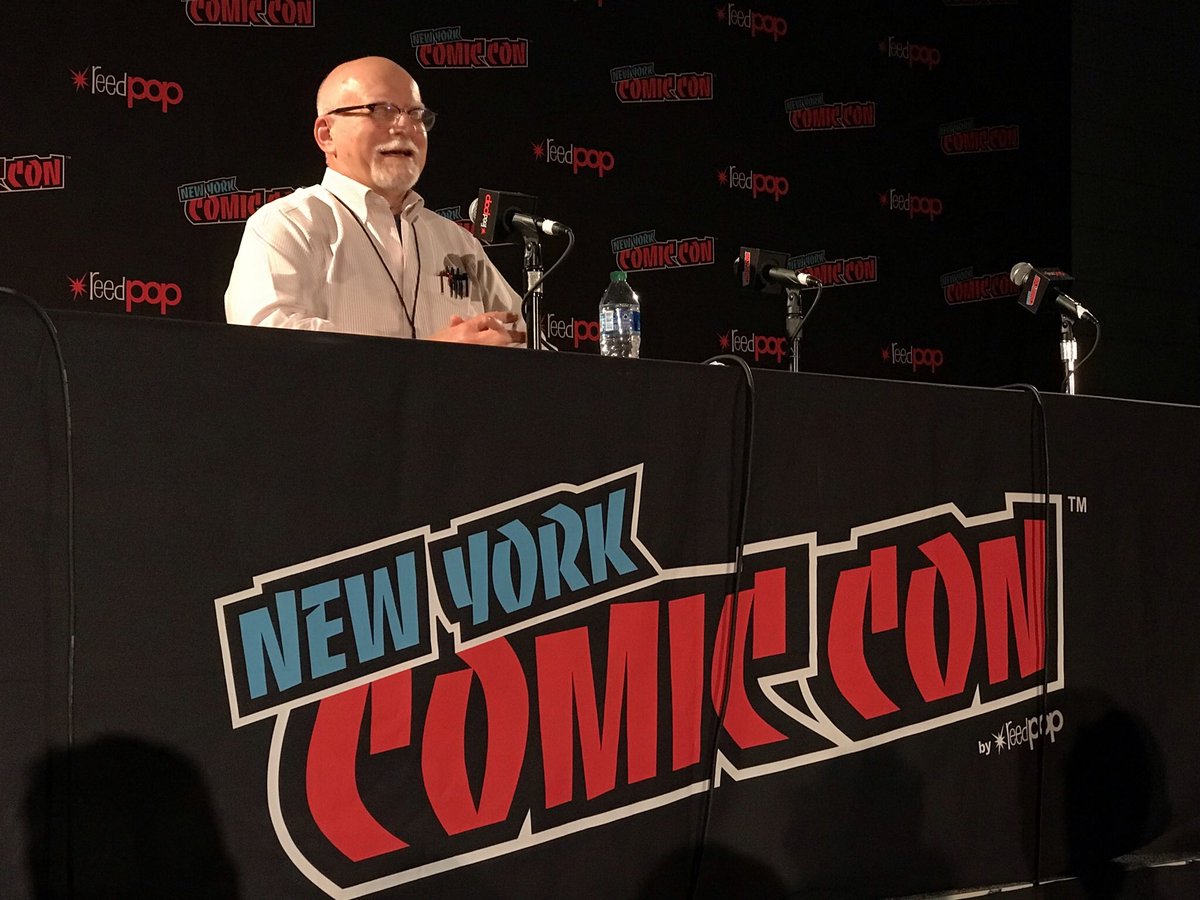 Comics and Hollywood: What Creators Need to Know. Publishers and experts discussed what comics creators need to know to advance in Hollywood. Tips include: communicate your idea clearly, good elevator pitch – Content is biz: be on time, professional. Be persistent and Network said Fred Pierce of Valiant Comics. Be honest and direct said Lee Kramer of After Shock Comix. 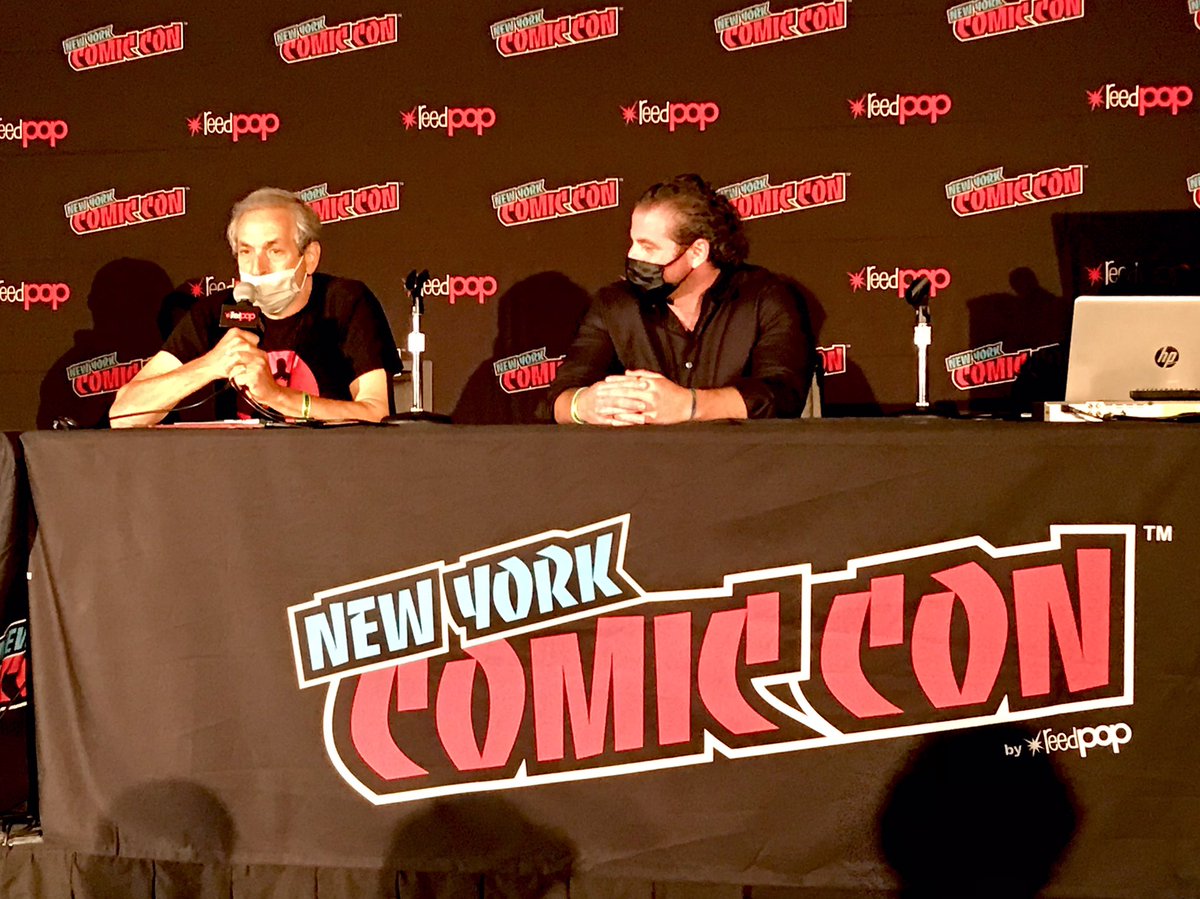 Cosplay Panel: Several cosplayers gave fans tips on how to get started and advance in their cosplay. Just get started with a character you resonate with. For foam/ armor: get a 3D printer to make your own costume / accessories. Find others online via IG, FB groups, Tiktok and connect w community Amazing attendee cosplay! 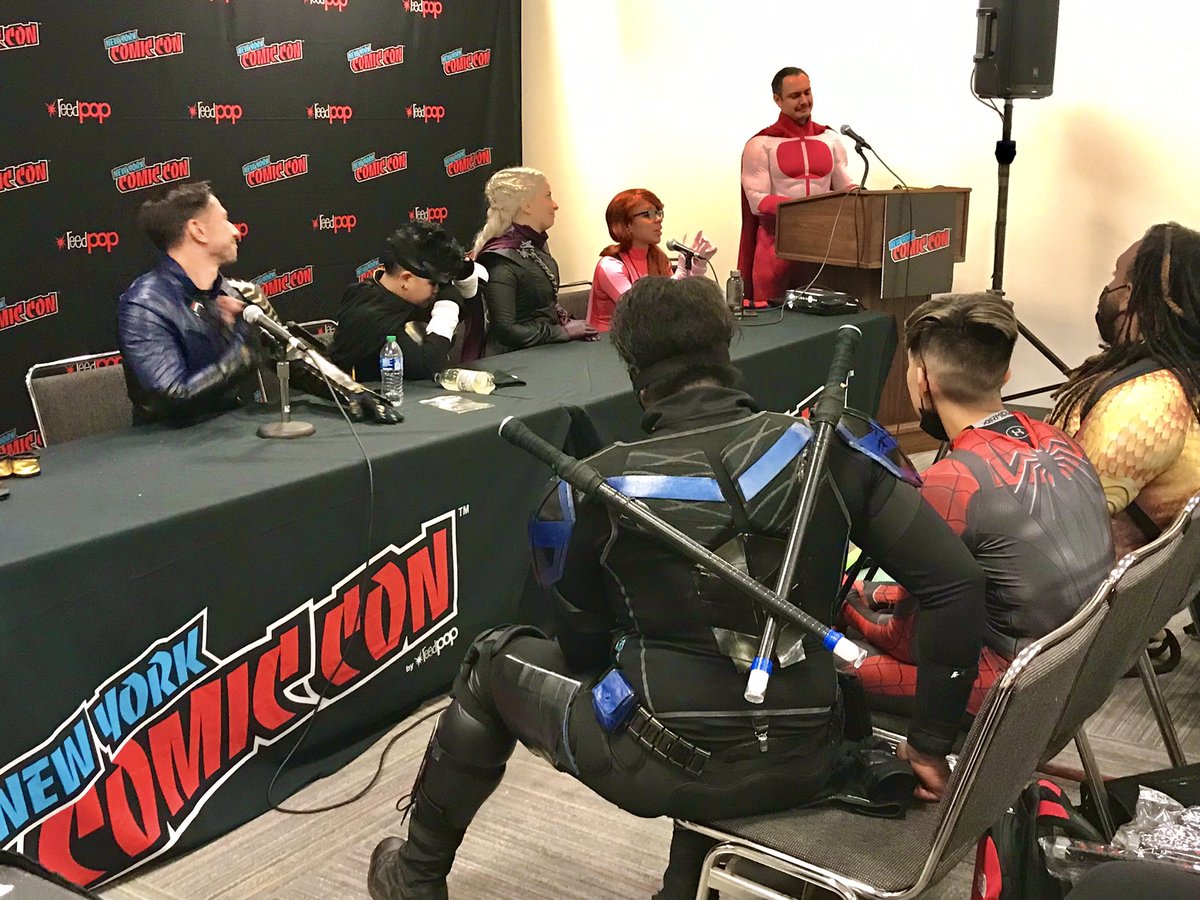 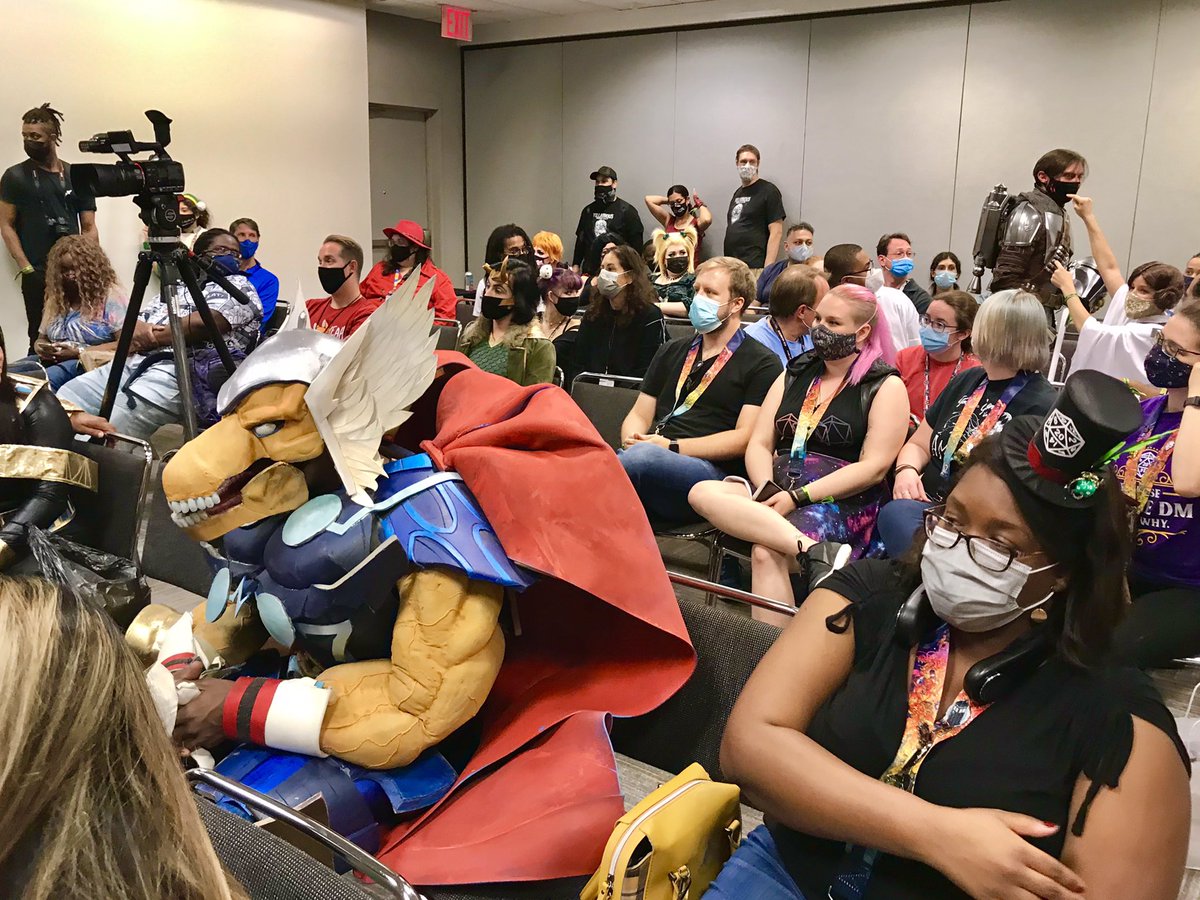 We rallied a group photo of panelists and attendees in DC cosplay. 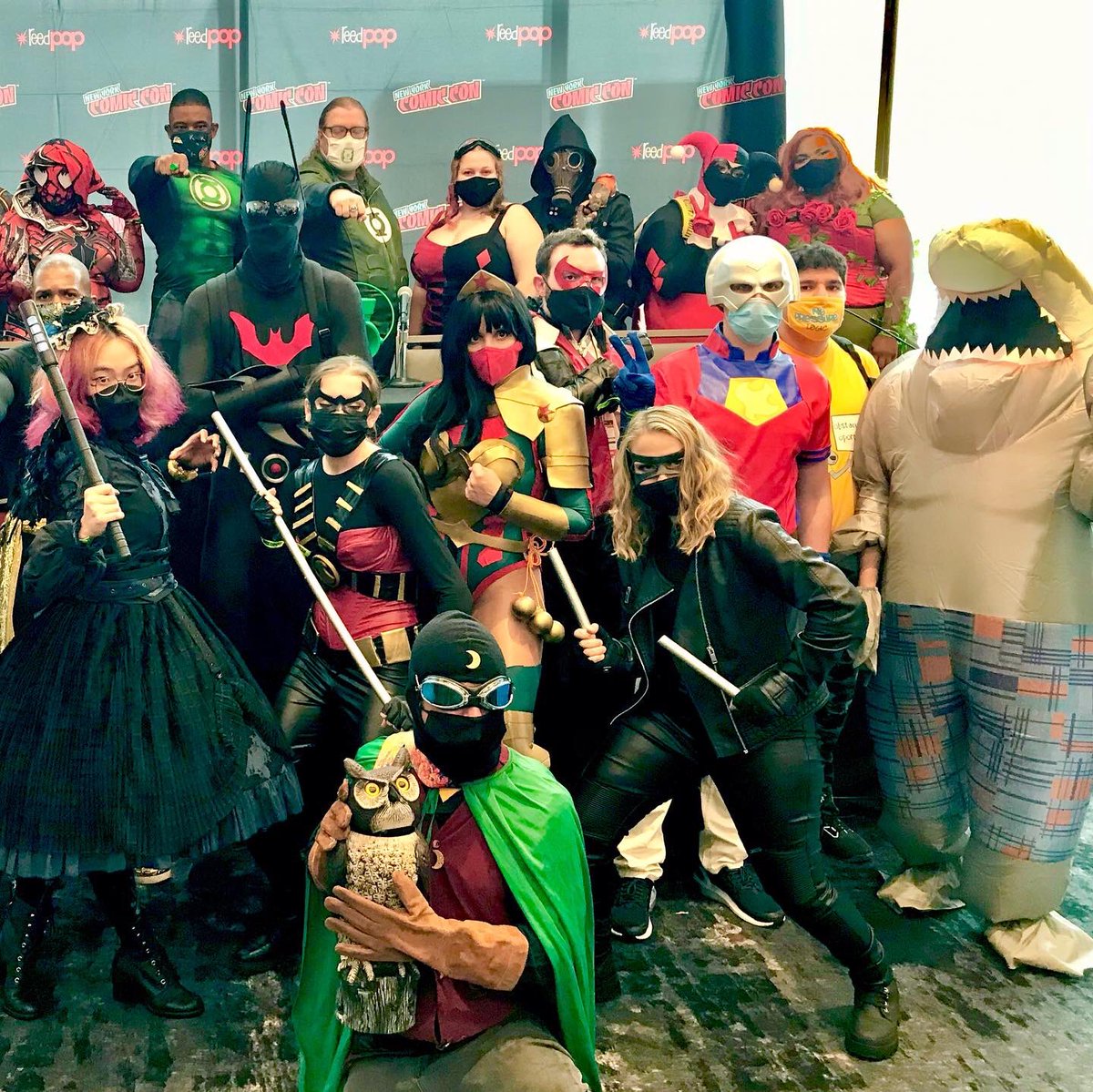 Spider-Man is a perennial favorite at New York Comic Con, home of Spidey.

Loki variants were very popular on the show floor. 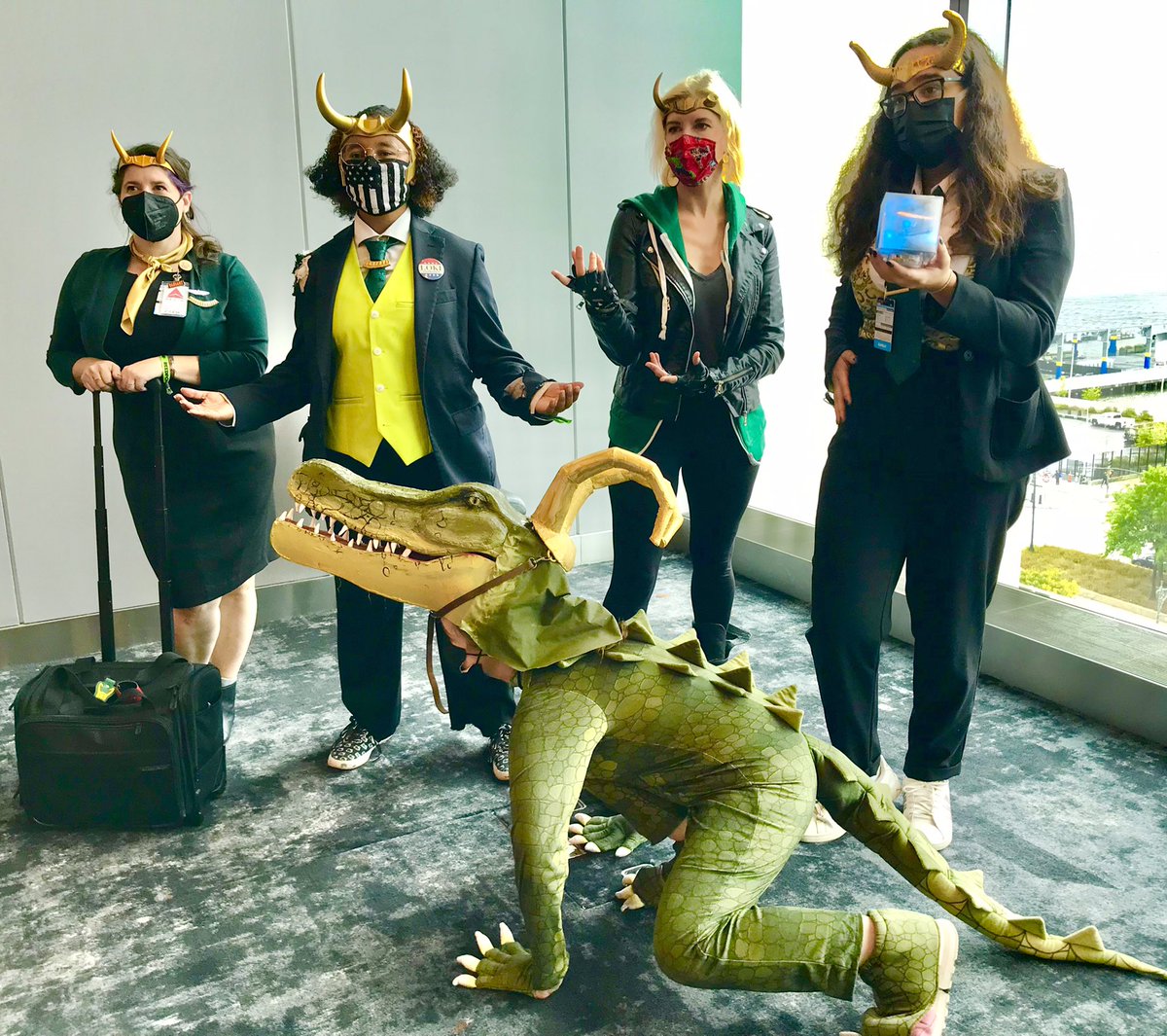 At the Marvel community meet up, we organized an Avengers Assemble style setup in the style of the 90s-era character posters with dozens of heroes. 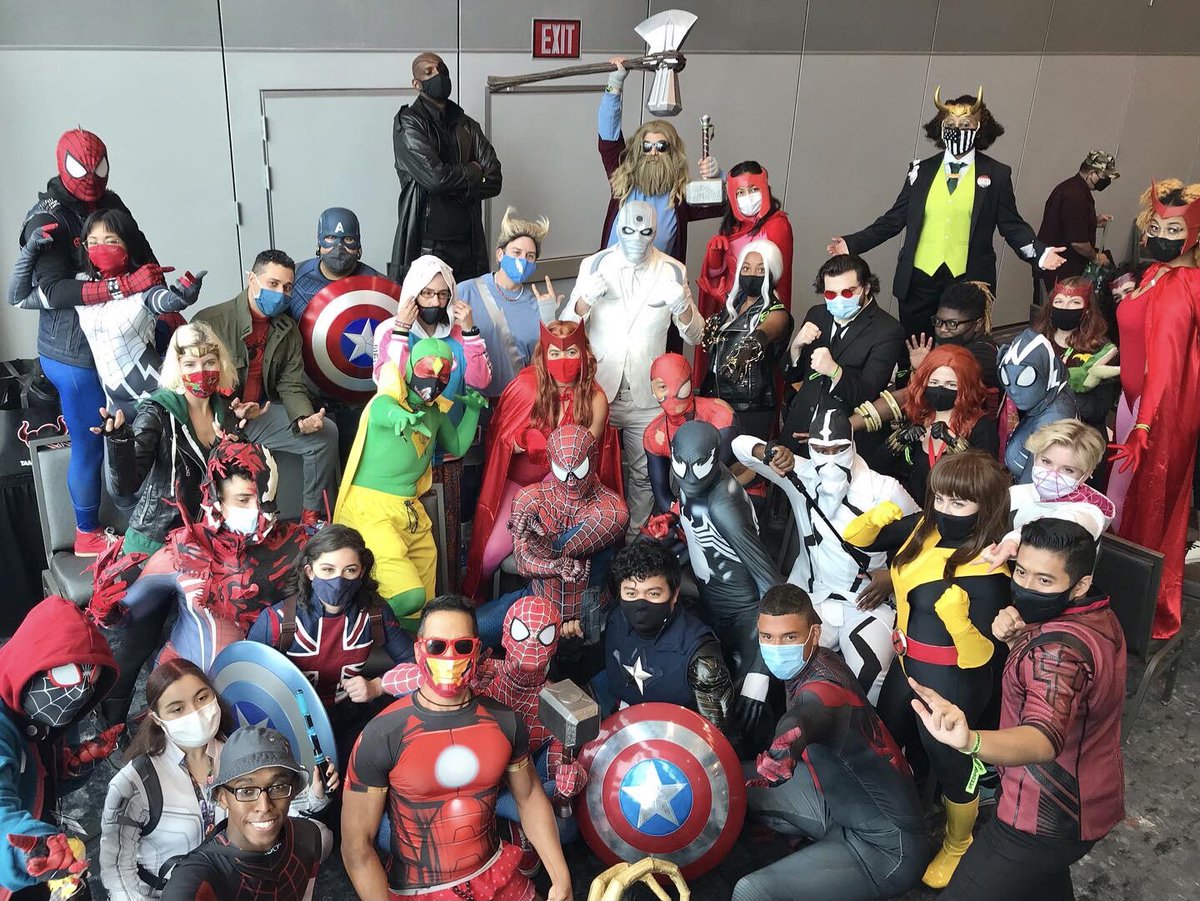 Bishop spotted shirtless. It’s a lewk he should keep in the comics! 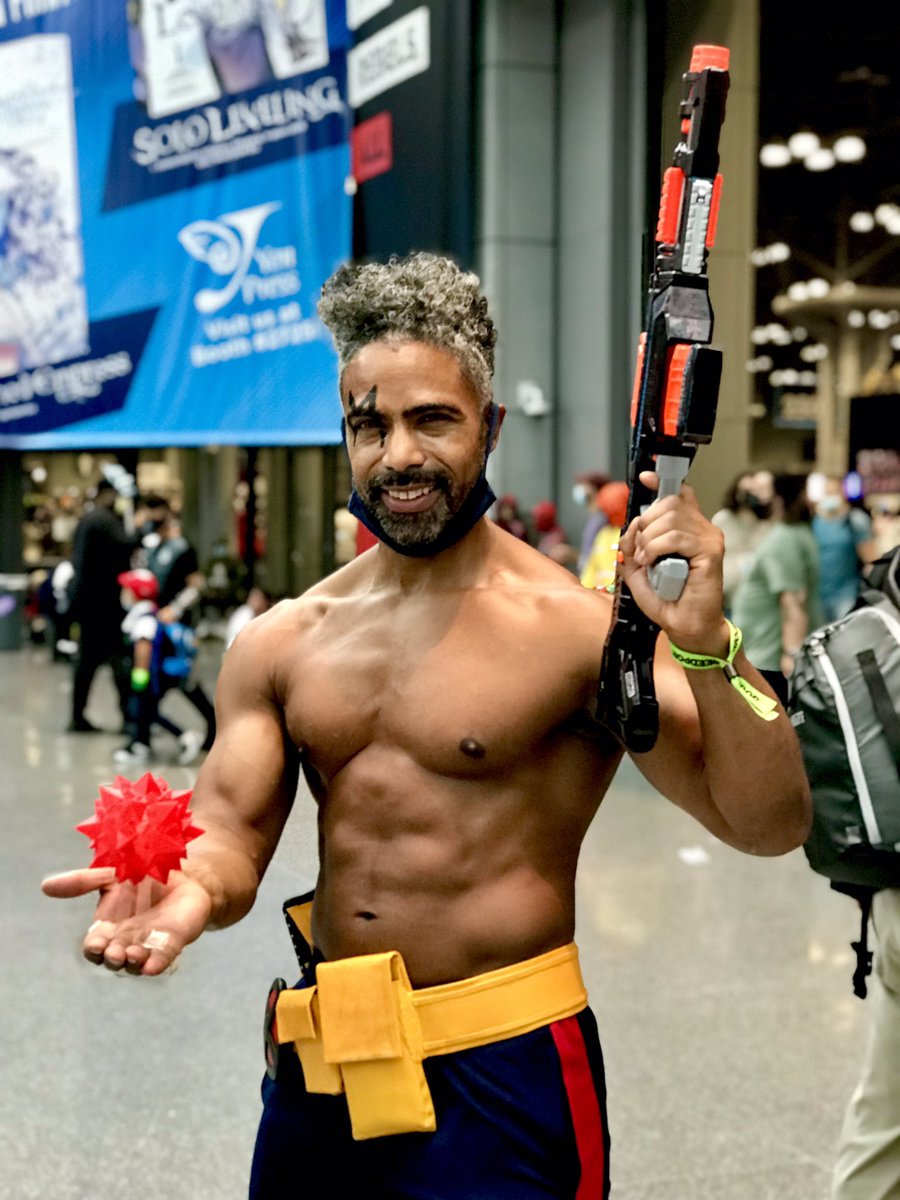 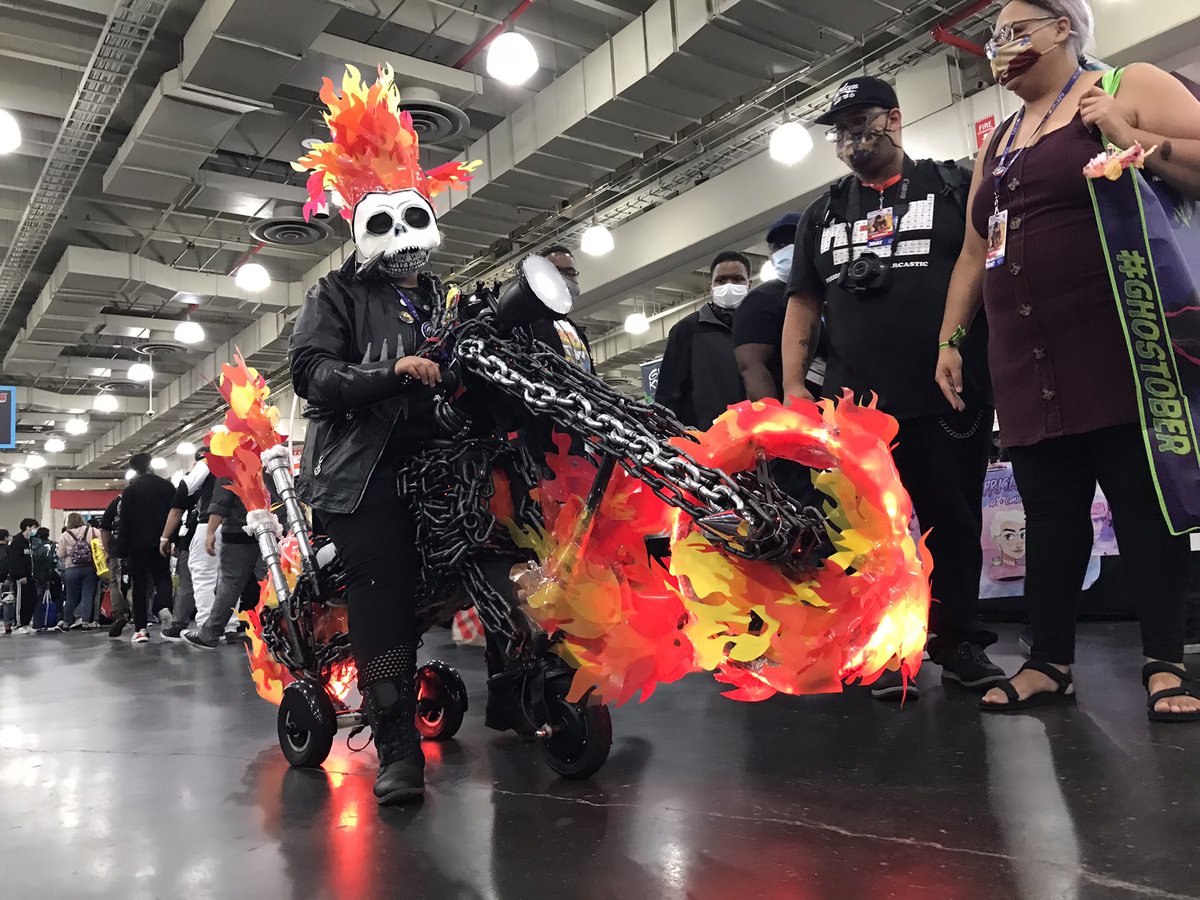 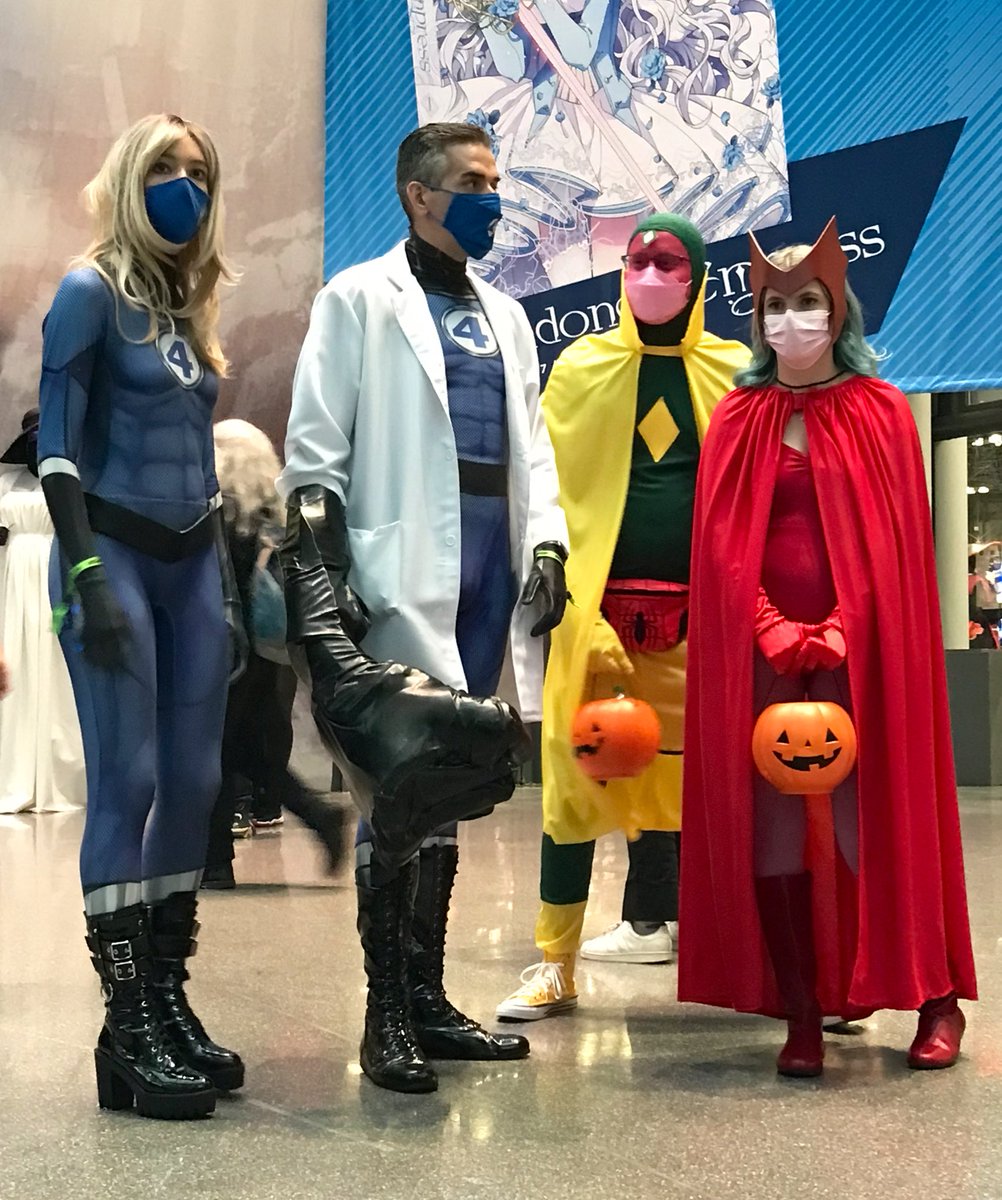 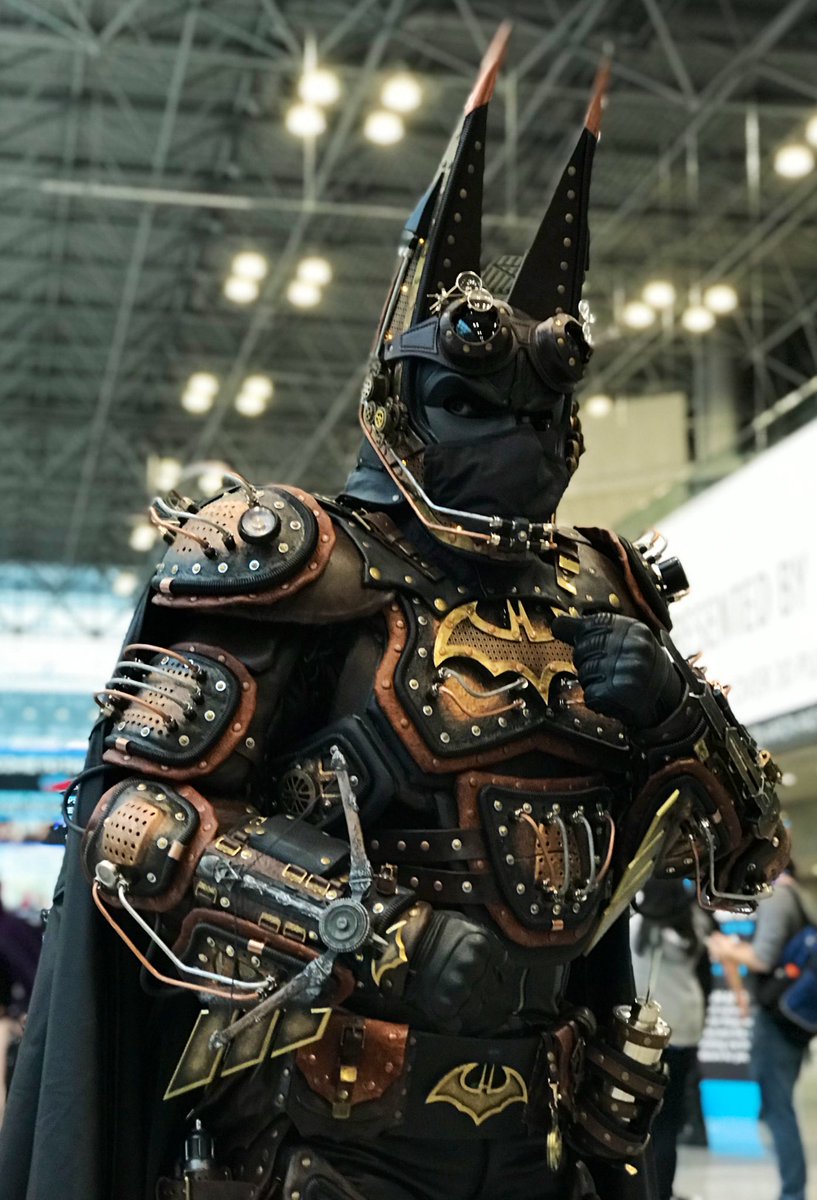 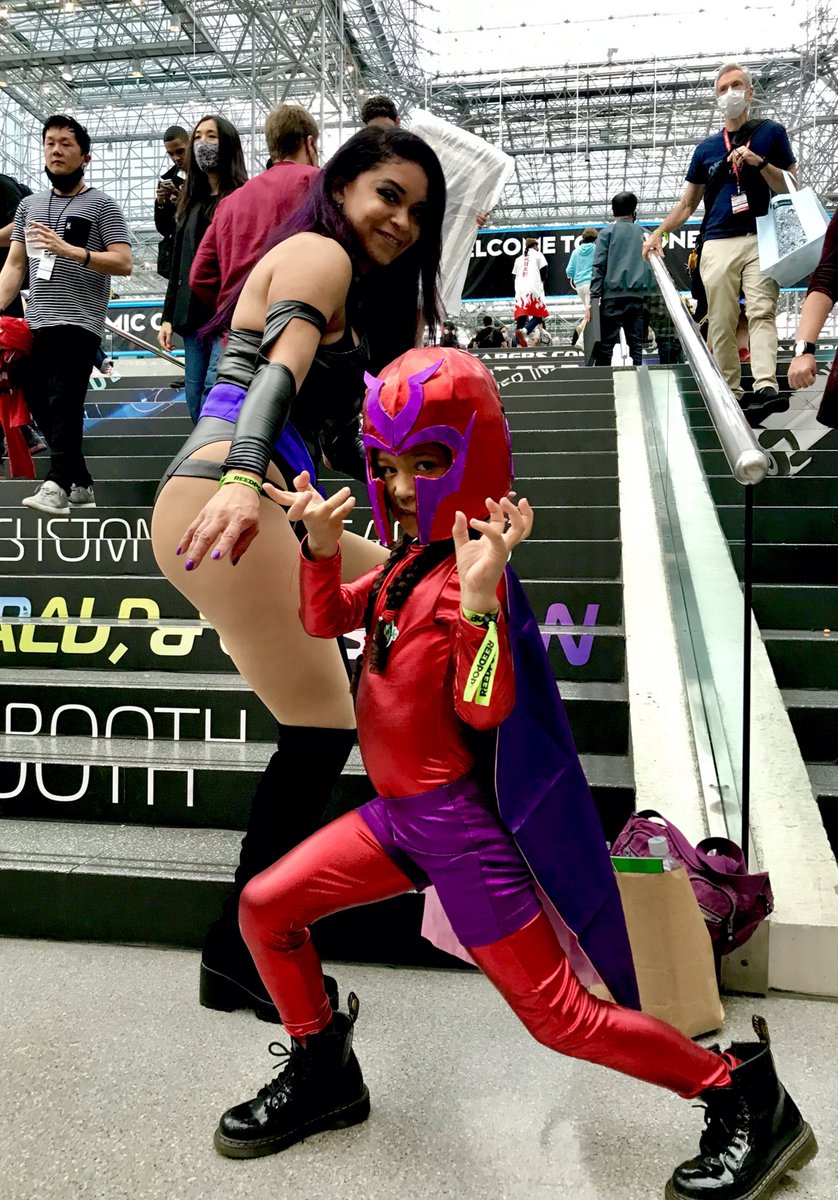 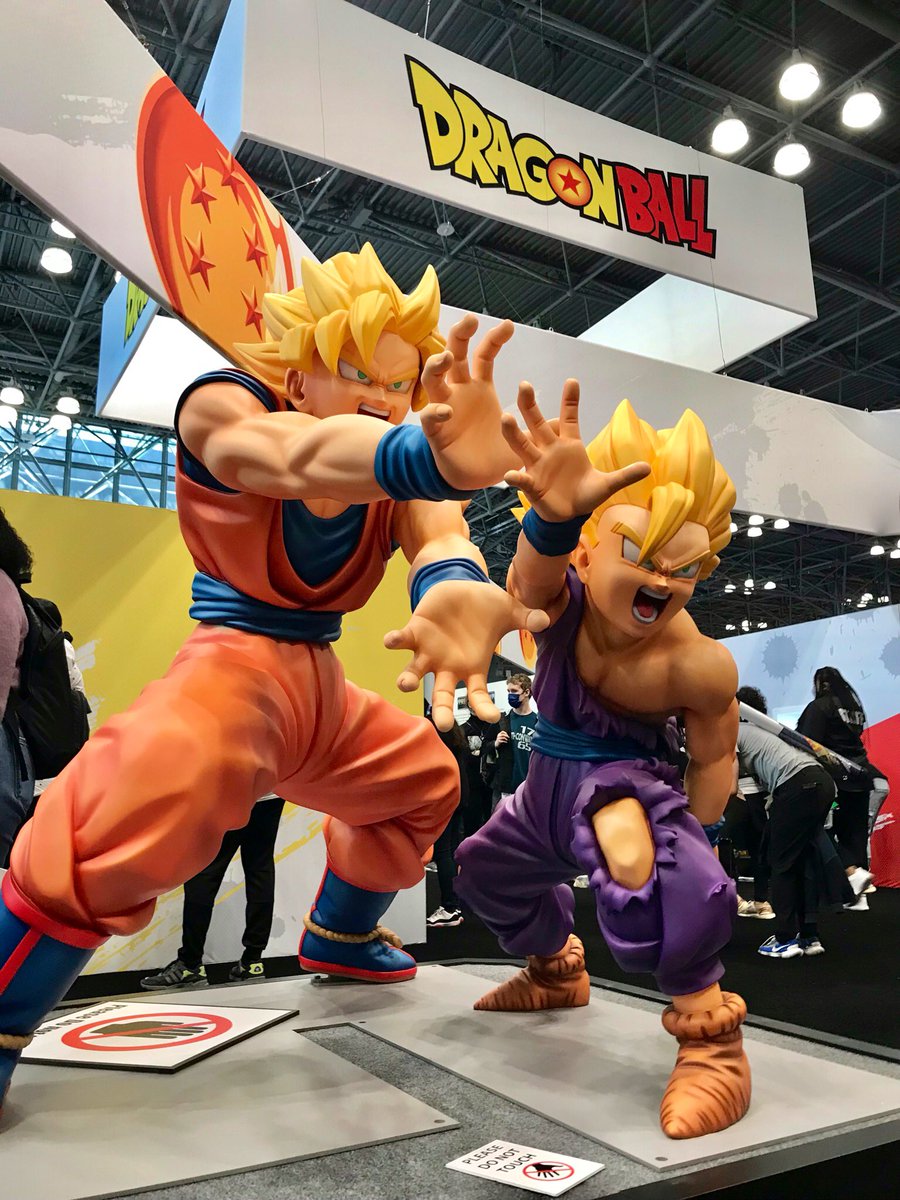 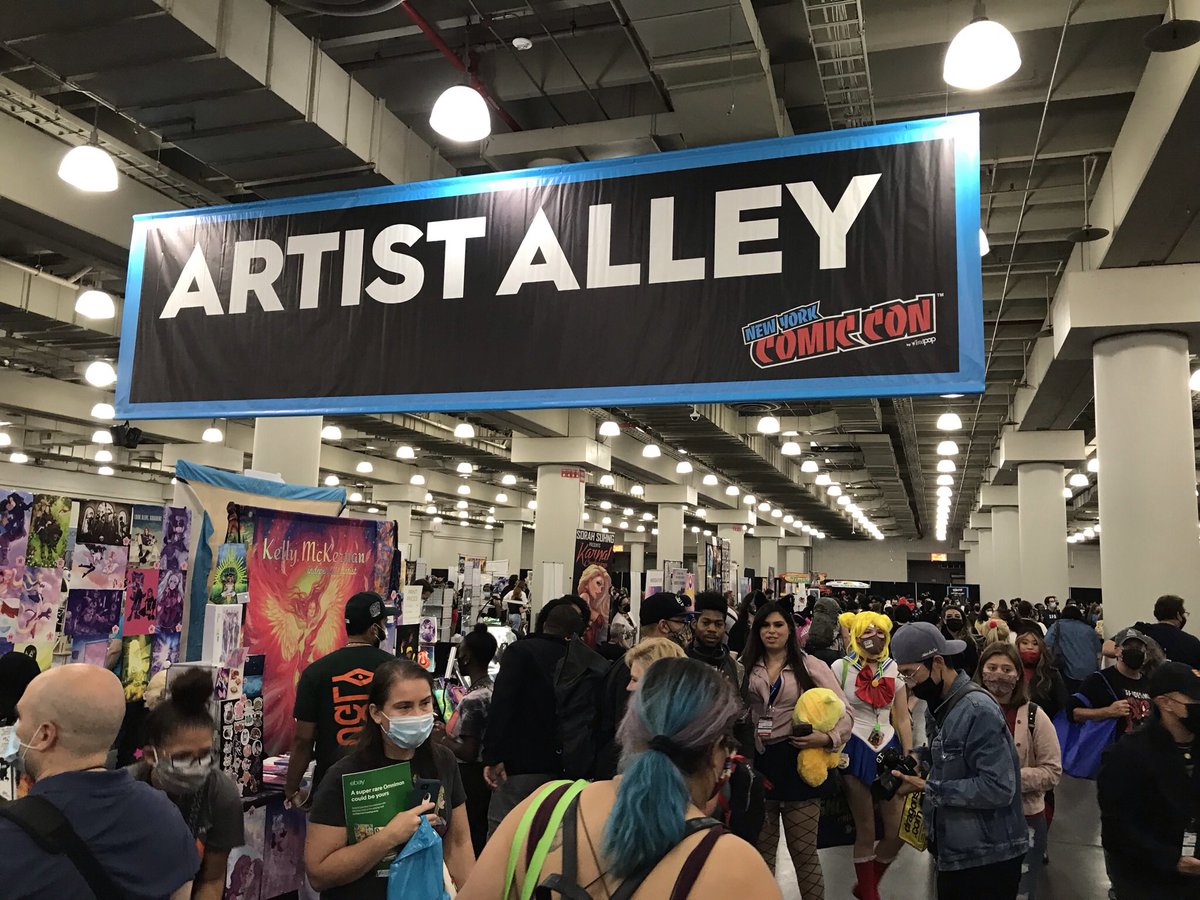 After the NYCC show floor closed on Sunday, several fans commented that they really enjoyed, missed – and needed – NYCC after skipping last year. Many said they were already feeling NYCC withdrawal just hours after the show ended, missing the convivial feeling enjoying their fave pop culture, and dressing up as their fave characters.