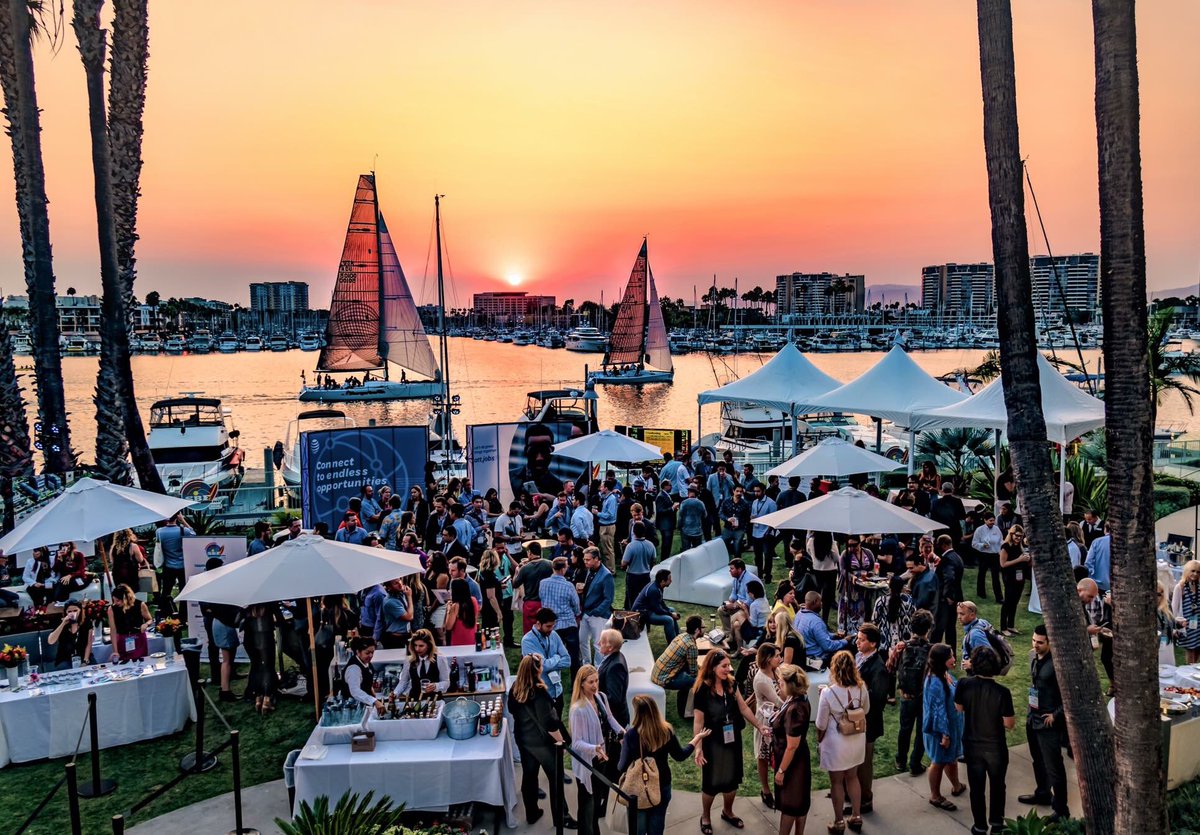 Kitterly won the Silicon Beach FestStartup Showcase 2016 title. The crafting site is an alum of 500 Startups, and is founded by Mari Bower, CEO. Kitterly wins the prize package including the SBF 2016 title, $5,000 courtesy Media Temple, a Surf Air flight to its California destinations, two Air New Zealand tickets on its LA – London route, ten hours transactional legal services from Sheappard Mullin, and three months membership at CTRL Collective, at either its Playa Vista or new Downtown location (for a tour email tm@ctrlcollective.com).

Silicon Beach Fest receives Certificate of Recognition from LAMayor Eric Garcetti. At Downtown Day on Monday, Office of LA Mayor Eric Garcetti city officials presented Silicon Beach Fest founder Kevin Winston with a Certificate of Recognition, on the 5th annivesary of Silicon Beach Fest this year (photo right). Then, LA City Officials described the Mayor’s tech initiatives, including attracting tech companies to move to LA, open data hackathons, digital divide programs, opportunities for startups to bid on city projects, and a huge job fair in January, which Jason Nazar is spearheading as LA City Entrepreneur In Residence.
Silicon Beach Fest Closing Party, presented by TechStyle Fashion Group, featured closing keynote speaker Dan O’Keefe, co-exeutive producer of the top TV show Silicon Valley. He spoke about producing and writing for the show, which is an inspiration and favorite show among entrepreneurs from Silicon Valley to Silicon Beach and around the world. He said that show writers get ideas for storylines based on tech news, visits to startups in Silicon Valley, and staff writers’ own personal experiences. The show also has consultant experts who advise on everything from investing and financing to developer and coding to ensure the show is authentic and accurate. He said the show is always looking for good new story ideas.
___
PANEL RECAPS
If you moderated or were on a panel, and can write a summary, please email it to info@digitalla.net with SBF as subject so we can add it here and on our site!

TechStyle CMO Shawn Gold discussed his company’s recent name change from JustFab, and its marketing campaigns across its portfolio of brands that include JustFab, Fabletics, ShoeDazzle and Fabkids. TechStyle specializes in using social media, TV, and other digital tools to reach each of its brands audience in different ways. For example, Shoedazzle is upbeat and hip; Fabletics activewear frequently uses humor, and Fabletics co-founder actress Kate Hudson frequently appears in videos. Watch replay.
____
How Television Fits in the Digital Conversation to Fuel Growth
Presented by Icon Media Direct

Growth is a big theme at this year’s Silicon, Beach Fest, with several LAstartups that have grown to national and international audience in the past few few years. Several startups have seen huge success from integrated digital and television campaigns to reach larger mainstream audiences. Nancy Lazkani, CEO of Icon Media Direct, moderated a panel with speakers from TrueCar, Jarden Consumer Solutions and Guthy-Renker who described how integrated digital and television campaigns can increase awareness, branding, and sales.  TrueCar CMO Neeraj said that television plus digital absolutely resulted in increase boost. Watch replay.

Javon Frazier, EVP, Strategy & Business Development, Studio 71, LP and UCLA Extension Instructor, discussed how he set out to raise $10,000 for their YouTube client’s project “Joking Hazard,” a card game that was developed to be the next “Cards Against Humanity.” They started a global Kickstarter online fundraising campaign to gain awareness and raise funds for their project. In less than 6 weeks, Studio 71, LP surpassed their expectations raising over $3.2 million and garnered attention for their project that is still making headlines. Javon and panelists discussed how they developed the campaign, oversaw all the marketing and will be handling the game’s printing and fulfillment.

Four female dating CEOs got together at Silicon Beach Fest to share their 30 years of dating industry tips on how to create the perfect dating profile. The conversation included how they got involved in the multi-billion dollar online dating industry, with backgrounds in technology, finance, entertainment, and fashion, and a discussion on the big elephant in the room, Tinder.

Here are their top tips on how to improve your dating life.

Julie Spira, Moderator and CEO of Cyber-Dating Expert: “Always ask a question in your profile or in text/email exchanges to become engaged in the convo and meet IRL.” @JulieSpira

Kelly Steckelberg, CEO of Zoosk: “Use Spellcheck. The Zoosk study about grammar and spelling showed it had a huge effect on success rate.” @Zoosk

Talia Goldstein, CEO of Three Day Rule: “Don’t post a mysterious other man or woman. The person viewing the profile will wonder, is this your husband or brother?” @ThreeDayRule

Full Recap with 20 Tips from the CEOs can be found at https://cyberdatingexpert.com/tips-female-dating-ceos

Women founders discussed how they raised money to start their companies, and raised subsequent rounds of funding. Watch replay.

Icon Media Direct CEO Nancy Lazkani moderated a panel with TrueCar and others on their TV + digitalmarketing campaigns. Icon Media Direct also presentedthe Opening Party at the Marina del Rey Hotel lawn, and is providing a free tote bag to all attendees.

– TechStyle Fashion Group, formerly known as JustFab Inc., iss a Premiere sponsor. CMO Shawn Gold spoke on a keynote on Friday Aug 26, plus other execs will spoke on the Fashion Tech panel downtown, and the Growth panel. TechStyle also presented the Closing Party at CTRL Collective.

– AT&T joins as a Platinum sponsor, with speakers from its DIRECTV product and other divisions on panels. AT&T presented the Thursday Night AT&T Reception, Aug 25, on the lawn at the Marina del Rey Hotel.
– Univision returns as a Platinum sponsor, with its Thursday Aug 25 panel discussing Latino content, influencers and distribution. Univision has launched several digital initiatives, partnering with Latino influencers, and more.

We are creating a list of press about SBF. If you wrote an article or blog post, please tweet @DigitalLA or email info@digitalla.net with SBF PRESS as the subject.
Some recent articles so far:
– 10 VR Predictions from SBF, in Huffington Post article by Liz H Kelly
– Huntington Post: “Back to the Future” Phone Booth by Unispace by Liz H Kelly
– “Inspiration at Silicon Beach Fest” article by Robert Brill of Brill Media
– “Drones Take Flight” article by Air Map.
Photo right is Kluge designer Abraham, who is watching the SiliconBeach Fest VR experience that he created. Fly through the SBF 3D boardwalk featured in Kluge’s graphics featured all over the festprograms, main stage banner and site. You can download it at http://siliconbeachfest.com/vr and watch it on your phone, or with VR cardboard googles, like the ones in the pic created by Unofficial Cardboard.
_____
PHOTOS

We are selecting and uploading photos from the thousands taken by Shootly photographers.

Silicon Beach Fest is LA‘s original festival celebrating LA tech, entertainment & startups with panels, keynotes, workshops, mixers, and more that was held August 24-27, 2016 in LA.  We are excited to celebrated its 5th year, adding an extra day of panels for three days of panels Aug 24-26 at the stunning Marina Del Rey Hotel, which had a $25M renovation, with gorgeous views of the marina, water and boats from every conference room. There will be a Silicon Beach Fest one-day event in the fall, and the mutliday event returns next summer 2017.

– Watch a recap of last year’s fun in this SBF sizzle reel, created by Lemonlight Media (which can create one for you!)