Indie creators, startup CEOs, cosplayers, filmmakers and comic creators described how they use digital tools to engage fans at our annual Digital LA – Superheroes Go Digital panel at Studio Beverly Hills. This panel has been held Monday in LA before San Diego Comic-Con to shine the spotlight on digital innovations related to superhero content. 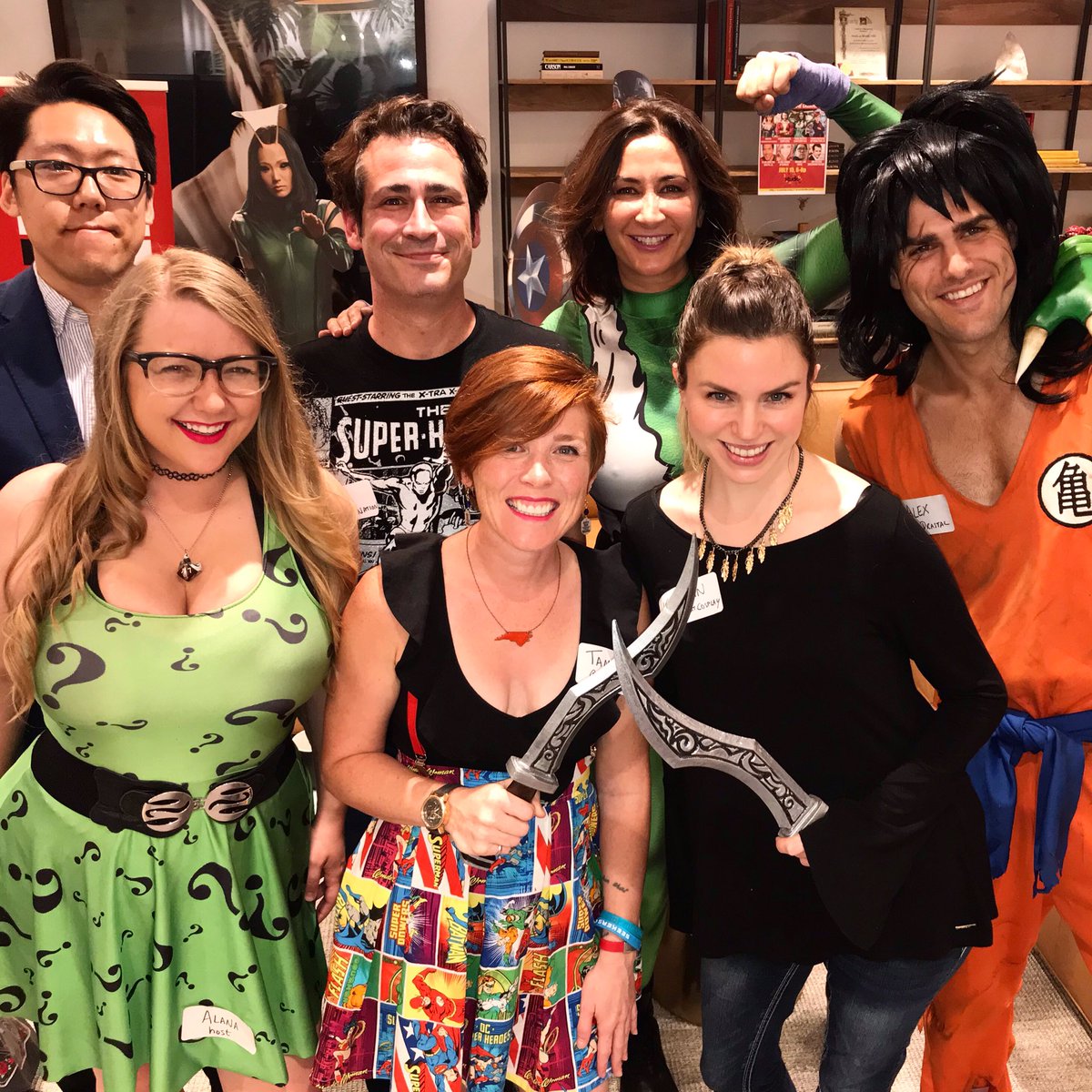 Speakers described how they use digital to engage fans in the Facebook live video. 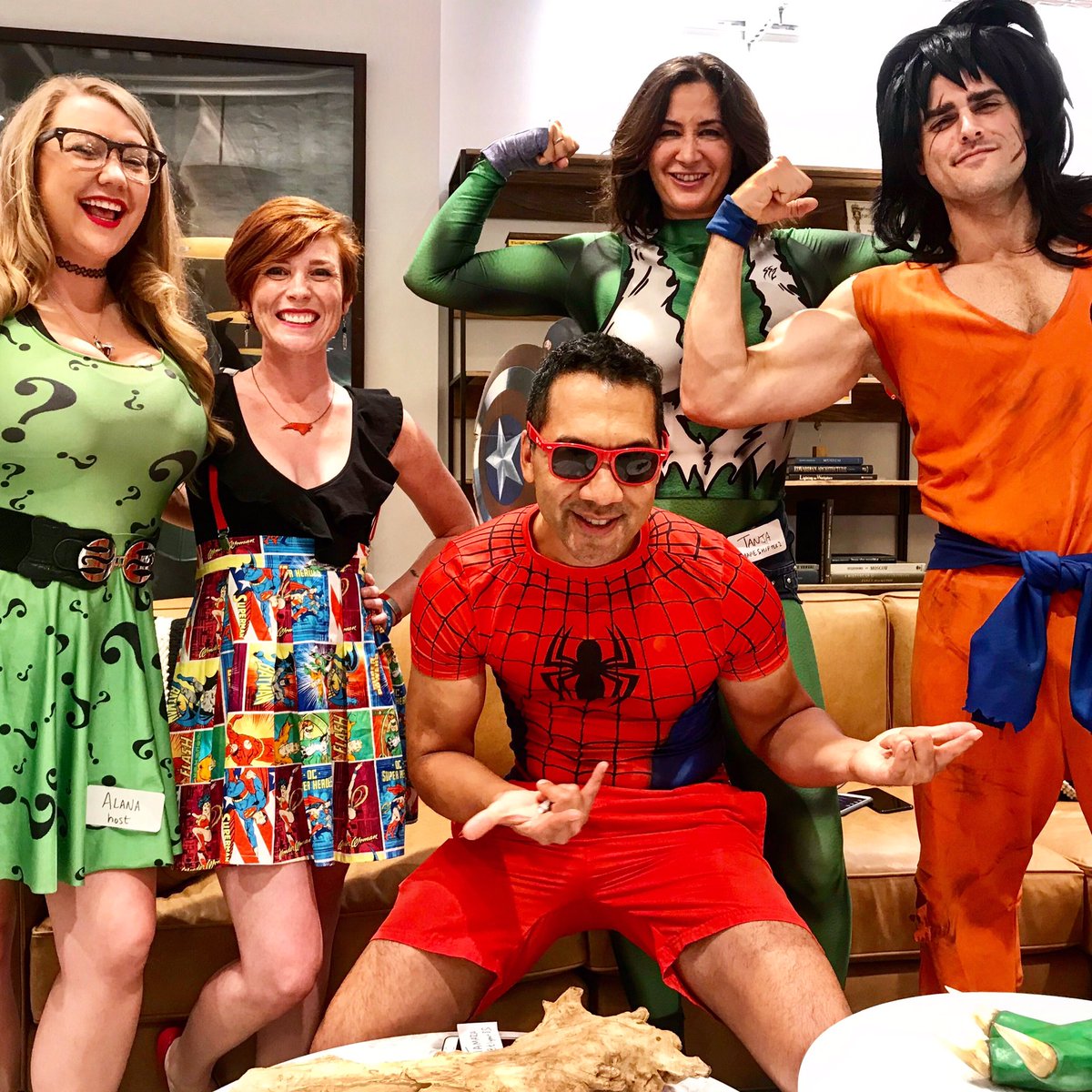 Cosplayer Alex Drastal said he engages his Instagram fans via multiple techniques. First, he tries to reply to each of the comments, at least for the first hour after a post. He also has use the Q&A feature to create Q&As to reply to questions with video answers. 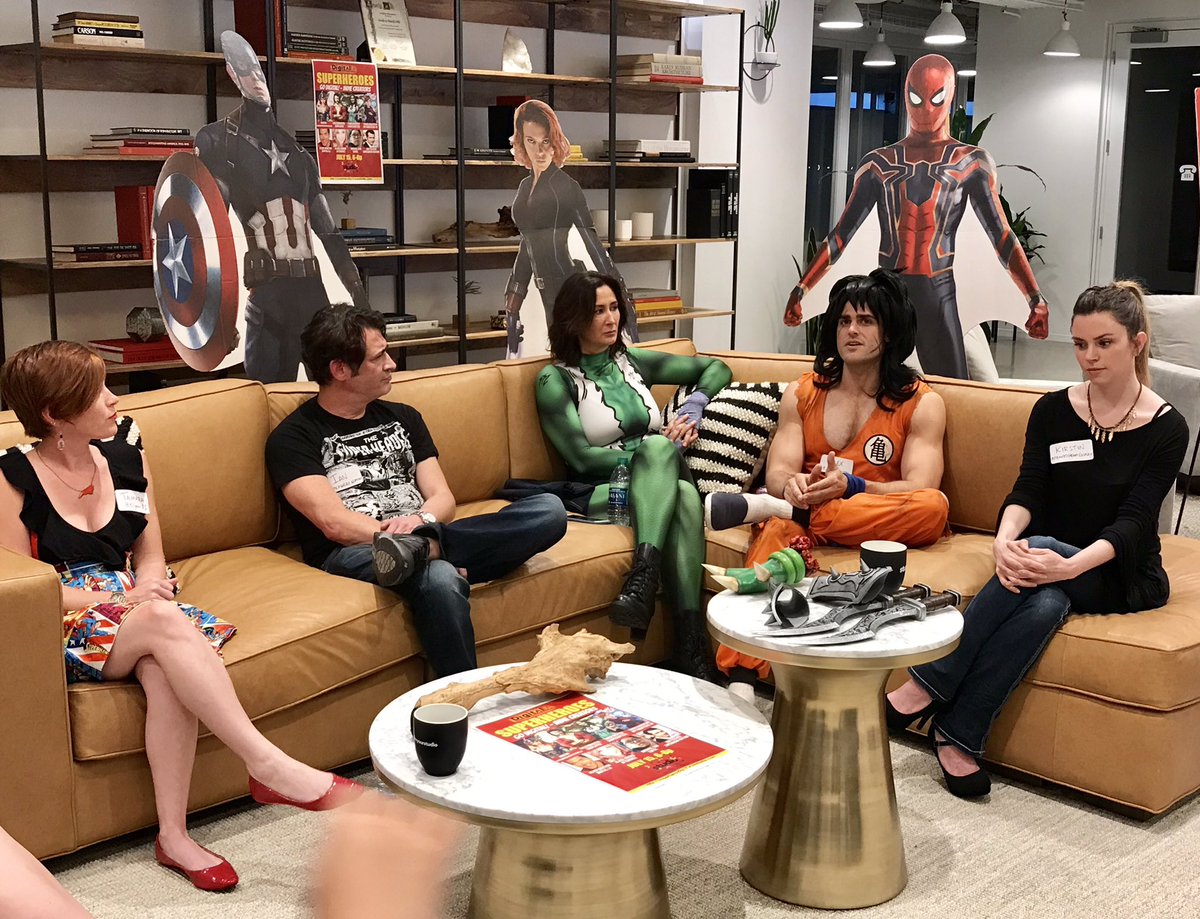 Cosplayer Kirstin @armoredheartcosplay said that she also tries to respond to comments within the first hour of posting a pic. She said that she  engages fans by asking for suggestions for other cosplays, and more. She also decides to cosplay related to what’s a the movies. For example, when Aquaman was in theaters, she dressed as Aquaman’s mother Atlanna (played by Nicole Kidman). 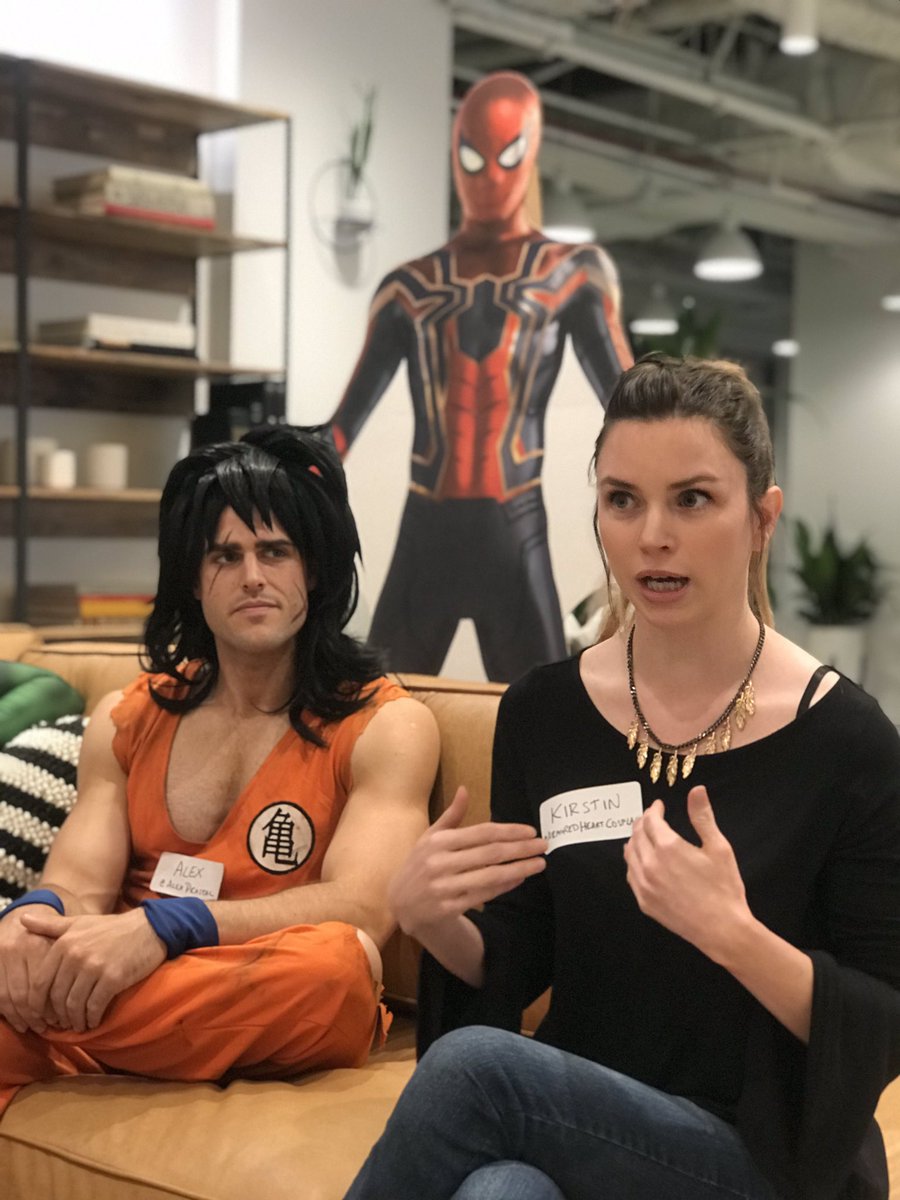 Kirstin said that lately, she has started to get into 3D printing some of her accessories, like wristbands or daggers. She finds the designs online at Thingiverse and other libraries, and then 3D prints them on her home 3D printer in her kitchen she bought for a few hundred dollars. It’s cheaper and quicker! She brought some of her 3D-printed daggers and wristbands (she 3D printed the spikes). 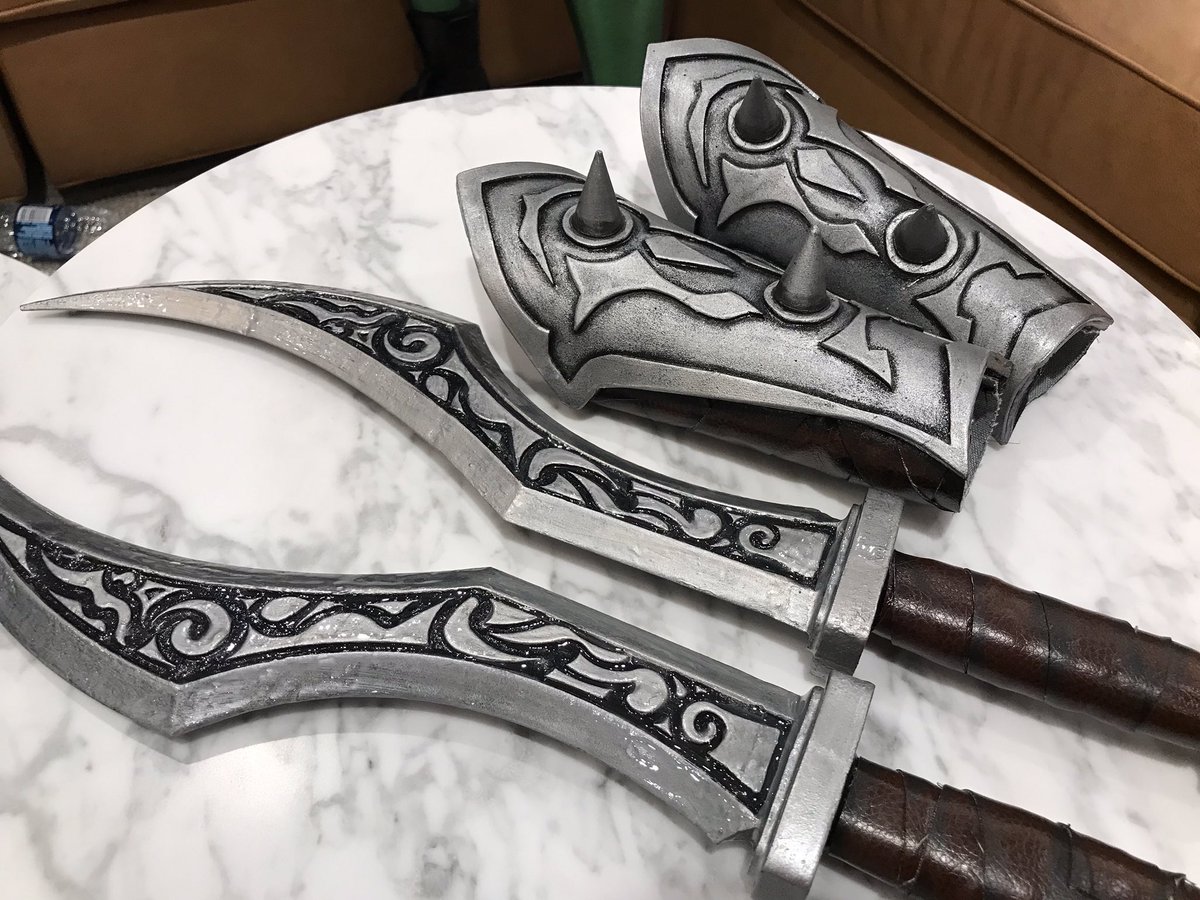 Tamara Robertson discussed how she used digital tools to launch her online comic book “Seekers of Science” (S.O.S.).The comic stars two real-life engineers (Tamara and her co-founder Dr. Tracy Fanara) who utilize science and technology to solve real world problems, from handling pollution to the science of making medicine. Each issue concludes with a DIY at home experiment where readers can take part in a small scale version of what the S.O.S. team battles in the issue (aim of <$5 in materials each time) as well as read Q&A’s with the experts who joined in that issue. More than 1,500 comics have been distributed to a several STEM and community organizations. Her second issue released on the day of the panel. Tamara described how she uses social media to engage her community. 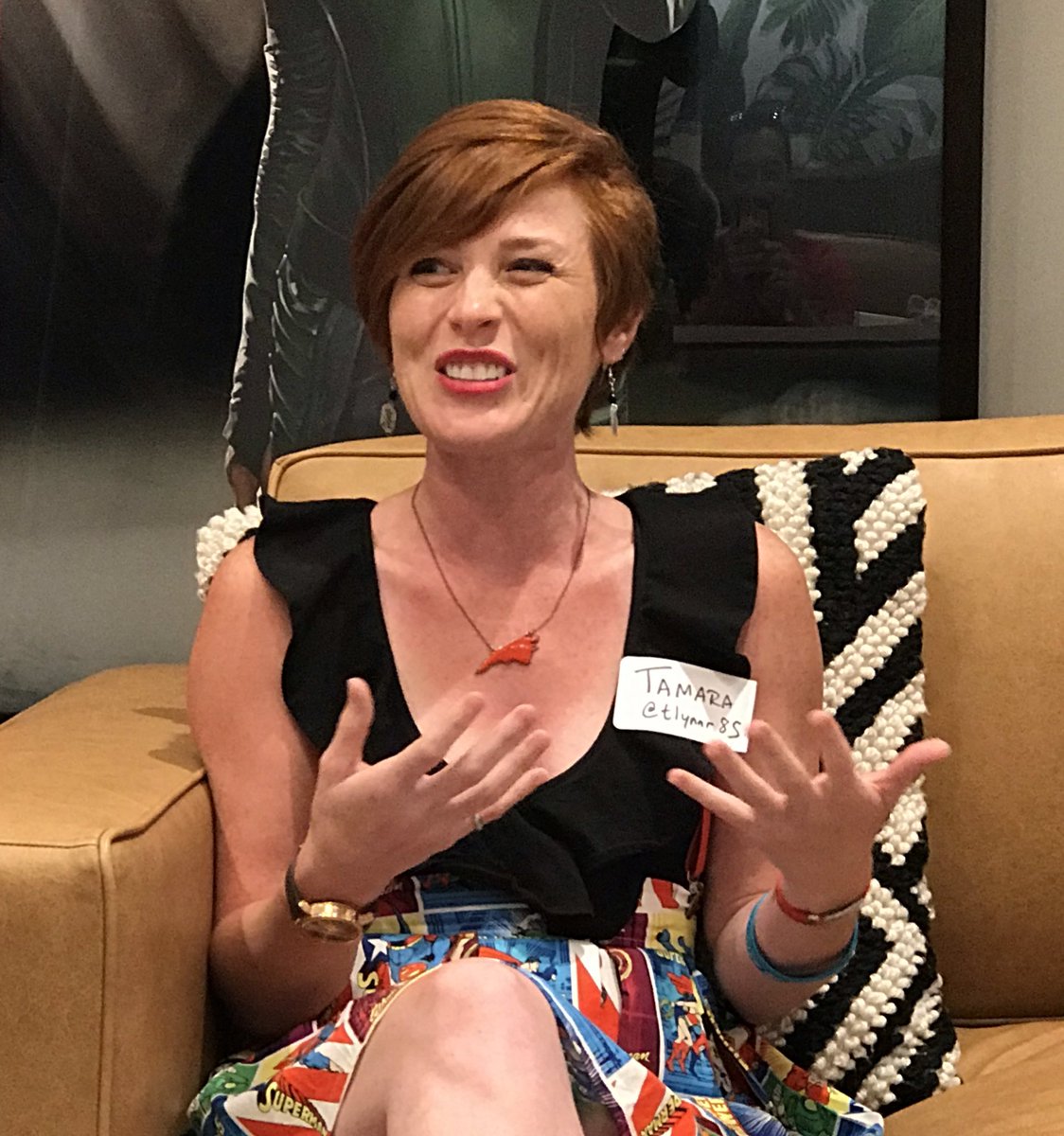 Host Alana Jordan said that she engages her fans during her live-streamed shows online via asking questions, giving shoutouts to interesting tweets or reading them on the stream, and reposing fan art and pics. She also has done giveaway and freebies to get fans excited. 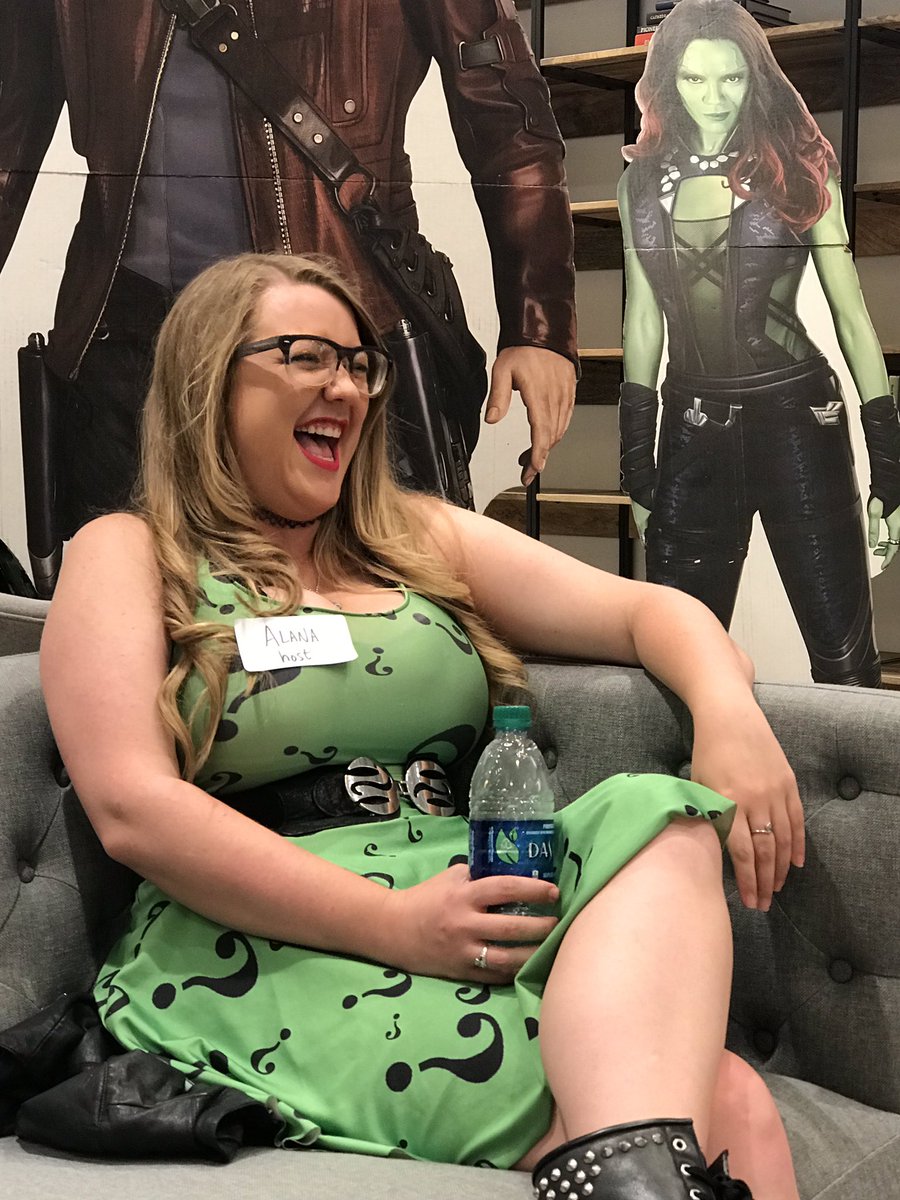 Filmmaker Ian Fischer is producing Superhero Nation, a documentary film about why superheroes are so popular in the US. He interviews dozens of top comic writers, publishers and more from Stan Lee to other industry experts. He said that he primary used Facebook to reach out directly to ask them to be interviewed. He said that connecting via Facebook has let him reach many more people than he’d be able to by going through traditional agents and PR channels.

Thank to our awesome speakers! 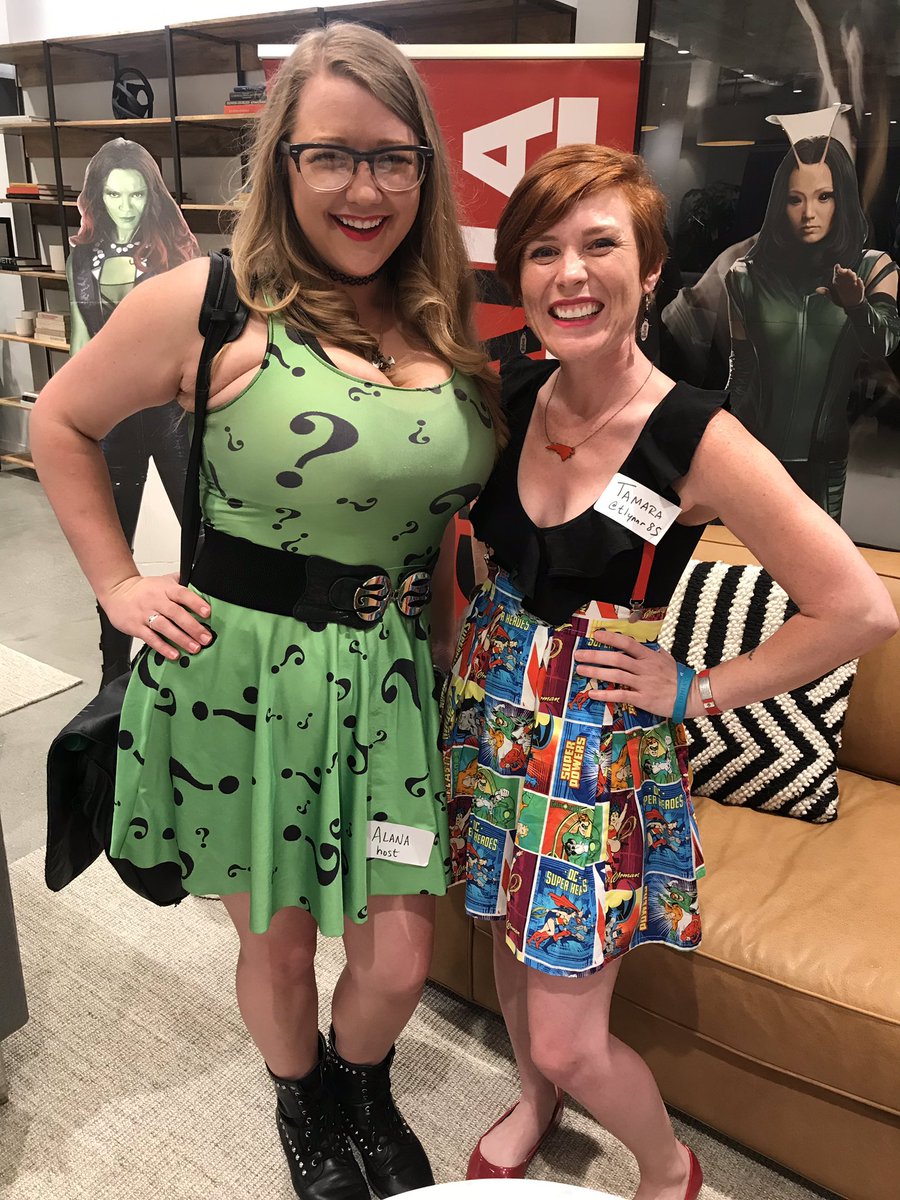 Michael Son described how he created Tapas, an online community of indie comic creators, to distribute and promote their indie comics.

Thanks to our amazing SPEAKERS: 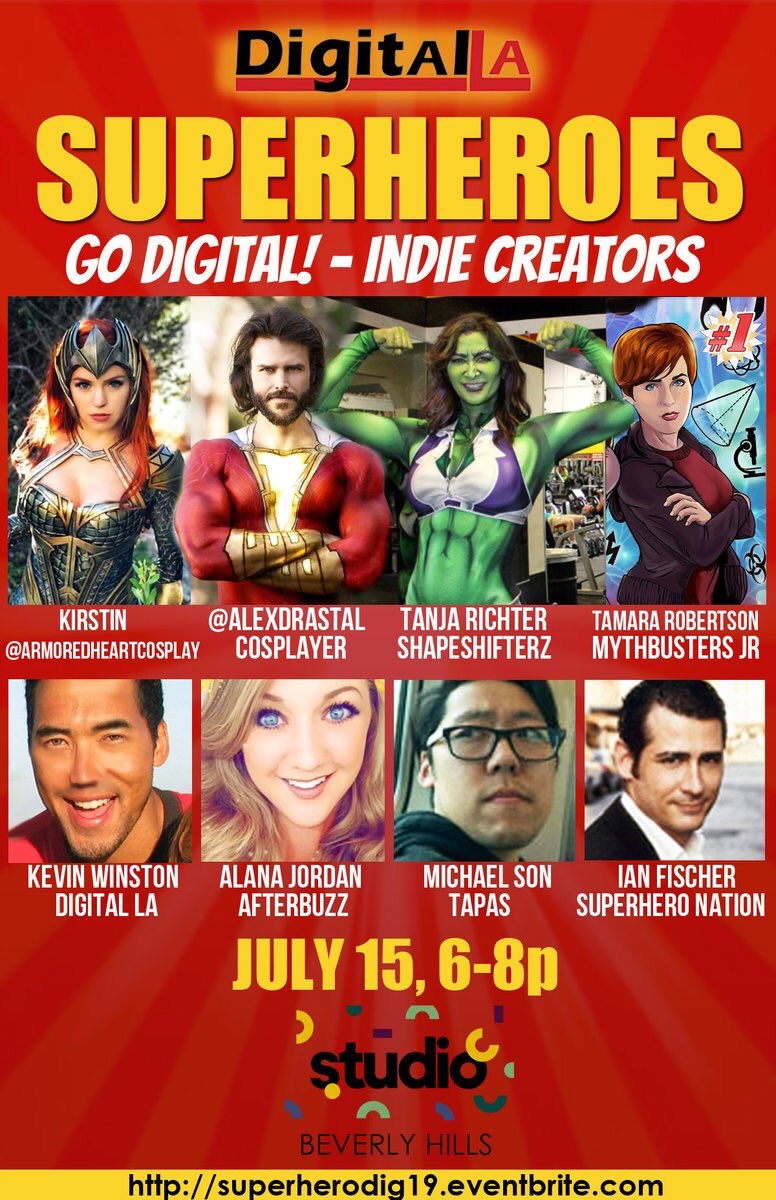 Tamara Robertson, Mythbusters Jr., Engineering and Design Expert, Co-Host SciJinks, Mythbusters Guest Host. She graduated North Carolina State CBE Engineering. Tamara speaks on panels about superhero science, and increasing women in STEM. She also likes to cosplay. She is co-creator of the outreach comic “Seekers of Science” (S.O.S.), starring two real-life engineers (Tamara and her co-founder Dr. Tracy Fanara) who utilize science and technology to solve real world problems, from handling pollution to the science of making medicine. Each issue concludes with a DIY at home experiment where readers can take part in a small scale version of what the S.O.S. team battles in the issue (aim of <$5 in materials each time) as well as read Q&A’s with the experts who joined in that issue. More than 1,500 comics have been distributed to a several STEM and community organizations. Her second issue releases on the day of this panel!

Alex Drastal, @alexdrastal, is an actor model and cosplayer in LA with more than 50K Instagram followers @alexdrastal. He is most known for cosplaying Stain and All Might from My Hero Acadamia as well as the Slave Leia and Broly from Dragonball Super. Most recently, he was Yamcha in the crater at this year’s Anime Expo. He engages with his Instagram fans to grow his following via Q&As and other tools.

Kirstin, @ArmoredHeartCosplay, likes to cospaly as Marvel and DC superheros, and other characters, with more than 106,000 Instagram followers. She has recently started using 3D printing to create some of her costumes and accessories.

Alana Jordan, AfterBuzz, Host. Alana has hosted for numerous superhero-themed shows on digital platforms, most notably DC Movie News which ironically has discussed the digital shift in comics on a digitally streaming show. She is also lead moderator and programming director for Amazing! Comic Con.

Tanja Richter, ShapeShifterZ, Creative Director/Founder and Lead Designer. Tanja Richter founded ShapeShifterz to incorporate fun and expressive ready-to-wear into technical athletic-wear. A former texture map designer for Digital Domain, she trained with some of Hollywood’s elite entertainment industries most influential special effects masters. Personality, athleticism and timing propelled her in the limelight as a professional wrestler on television’s Women of Wrestling. Behind the scenes, she made costumes for her vignette videos and some of the series other characters. Eventually, Tanja combined her love of costume creation and technical skills as a digital artist with her understanding of athletic performance to conceptualize the prototypes for ShapeShifterZ. She has created superhero themed outfits inspired by She-Hulk and other superheroes. Her outfits are sold primarily online.

Michael Son, Tapas, Senior Editor-in-Chief. As Editor, Michael has grown Tapas’ community of independent creators, from 8 to 45,000 membrs. He has helmed notable digital comics projects including Cheshire Crossing with Andy Weir (author of The Martian) and Sarah Andersen (creator of Adulthood is a Myth), as well as Meg, Jo, Beth and Amy, a modern adaptation of Little Women with an all-star art team physically published by Hachette.” He graduated from UC Berkeley where he facilitated a course on publishing creator owned comics.

Ian Fischer, Superhero Nation, Producer / Director. Ian has been working on Superhero Nation, a documentary that examines which explores America’s love affair with Superheroes and what that says about American culture.. He has interviewed dozens of top comics writers, artists, and fans to try to find the answer. His film, several years in the making, follows fandom from sevearl years ago to recent Marvel Cinematic Universe films today.

Thanks to Studio Beverly Hills for hosting us as our venue sponsor! Studio Beverly Hills is a new coworking space Studio at Beverly Hills is a differentiated, global workspace where your company can thrive. Studio at Beverly Hills provides world-class, customized workspaces to meet every need – from open seating, to private suites, to your own dedicated space – all with move-in ready convenience. Studio offers you a seamless solution in an exceptional space, complete with IT solutions, carefully curated spaces, premium furniture and access to other global Studio locations. Schedule a tour BeverlyHills@yourstudio.com.