Thor: Love and Thunder is fun and funny, reuniting Jane with Thor, Valkyrie, Korg, and the Guardians vs. Gorr. But beyond the jokes, there’s not enough stakes or compelling story. Gorr and Val need more to do. 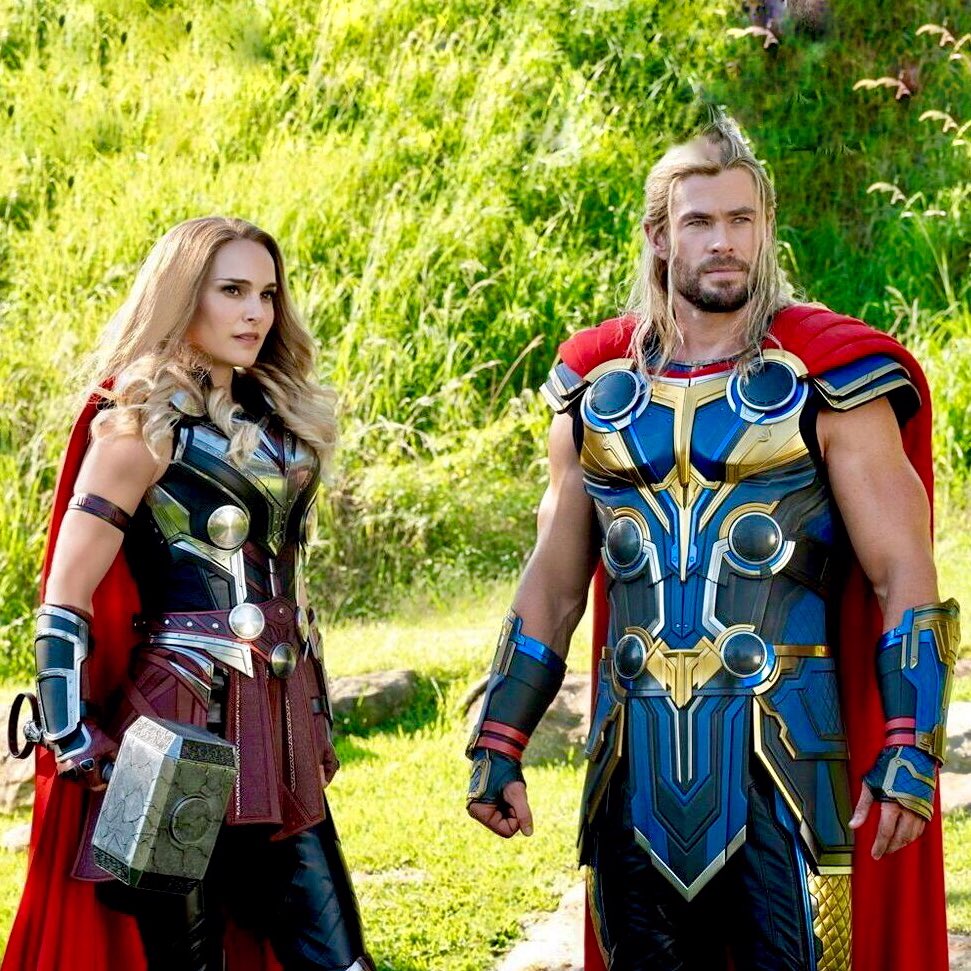 The film starts with Gorr (Christian Bale’s) origin. The last loyal disciple of some tribe buries his daughter, and then stumbles upon the god he’s been praying to all this time. This god mocks Gorr’s blind devotion, so Gorr kills him with the god-killing necrosword lying conveniently nearby. The necrosword tells Gorr to Eternity to grant him one wish. And so Gorr the God Butcher starts his revenge on all gods god-killing spree – unfortunately all off-screen.

Gorr decides to kidnap the children of New Asgard in a giant space crib, to lure Thor with his Stormbreaker axe which will help him reach Eternity. Thor must of course stop him, so he ditches his Guardians of the Galaxy buddies to help. He’s joined by his ex Jane Foster, who mysteriously shows up with reformed Mjolnir as the Mighty Thor.

How? Exhausted by her stage four cancer and chemotherapy, Jane reads that Mjolnir can increase the health of whoever wields it. She theorizes that may include her cancer. So she visits New Asgard, now a tourist destination, to see Mjolinir’s rubble remains on display. Mjolnir’s broken pieces sense her presence, and reform as Mjolnir, granting her the power of the Mighty Thor.

Thor and Jane, team up with Valkyrie and Korg and two screaming goats (which you’ll find very hilarious or annoying), set off to find the kidnapped kids. But they feel they need help. So they stop by Omnipotent City to seek Zeus’ help in the Golden Temple. When Zeus refuses to help, crestfallen Thor and friends decide to fight back. Valkyrie takes his magic Thunderbolt lightning bolt weapon. The gang escape and continue their quest to find the kids in the Shadow World. They eventually find the kids and battle Gorr, with lots of cool lighting bolt effects. More stuff happens, but we’ll leave it at that not to give away too much.

Overall, the movie is light-hearted and fun. But compared to Ragnarok, it’s missing some story beats.

More stakes. In Ragnarok, Hela destroyed Asgard, killed most of the Asgardians, and gauged Thor’s eye. In Thor, nothing that bad really happens – there’s no threat. Thor is basically invincible. You know the kids will never really be harmed. Most of the final battles take place in CGI space, safely far away from innocent bystanders. Taika, who directed and co-wrote this film, is good with jokes, but a movie cannot be a string of jokes. Movies need more story, and more at stake – actual threats, especially after Ragnarok.

More Gorr. Christian Bale plays a creepy Gorr, but Gorr needs more to do. He basically babysits the children of Asgard for free for a few days, and kills some gods mostly off-screen. Villains need to villain – show not tell. We need to see Gorr the God Butcher live up to his name, by stalking and killing a few more gods to better establish his threat, and the need for Thor and friends to stop him. Instead, he’s more Gorr the Baby Sitter. Sadly, Gorr falls into the MCU Mild Milquetoast villain camp, like most MCU villains except for Thanos and Hela.

More Valkyrie. Tessa Thompson plays an excellent Valkyrie and is well loved by fans. But once Jane shows up, Valkyrie is suddenly a third wheel with not much to do. The story focuses on Thor and his ex Jane. Yes, Valkyrie fights in several battles, and she’s the one who nabs Zeus’ Thunderbolt. But when she gets injured (aka nerfed), she disappears from the final third of the movie. This is especially surprising when the end of Endgame implies she is going to find her queen. In a film titled Love and Thunder, she could have easily found her Queen love as well – perhaps one of the Zeusettes. As is, she has no character arc.

More Guardians. The lovable Guardians of the Galaxy appear for about five minutes at the beginning of the movie, but space jump away pretty quickly, not adding much to the plot or humor. Also a waste. You’d expect them to return at the end to help, but nope. Taika has said that’s too predictable.

Kids as Plot Devices. Thor falls into the recent trend of kids as plot devices. Gorr’s daughter’s death motivates him to revenge. Gorr kidnaps kids to lure Thor. While it’s good that the hero’s wife/girlfriend’s death or capture to motivate the hero is used less in films these days, it’s unfortunate that kids are now being victimized and substituted instead. At least in this movie, both Gorr’s daughter and the kidnapped kids get some agency by the end of the film.

There are several bright spots to this film.

Jane is back! After the dismal catastrophe of Thor 2, where Natalie and everyone else seemed as annoyed and bored as viewers watching it, it’s nice to have Natalie back.  And she finally looks like she’s having fun, decked out in Thor helmet, outfit, cape, with gorgeous cascading blonde locks. Her mysterious disappearance in Thor: Ragnarok is explained: She and Thor were dating, but drifted apart. Her struggle with cancer makes her revel all the more in her role as the Mighty Thor. She is always up for action and flies around with lightning strikes repeatedly. 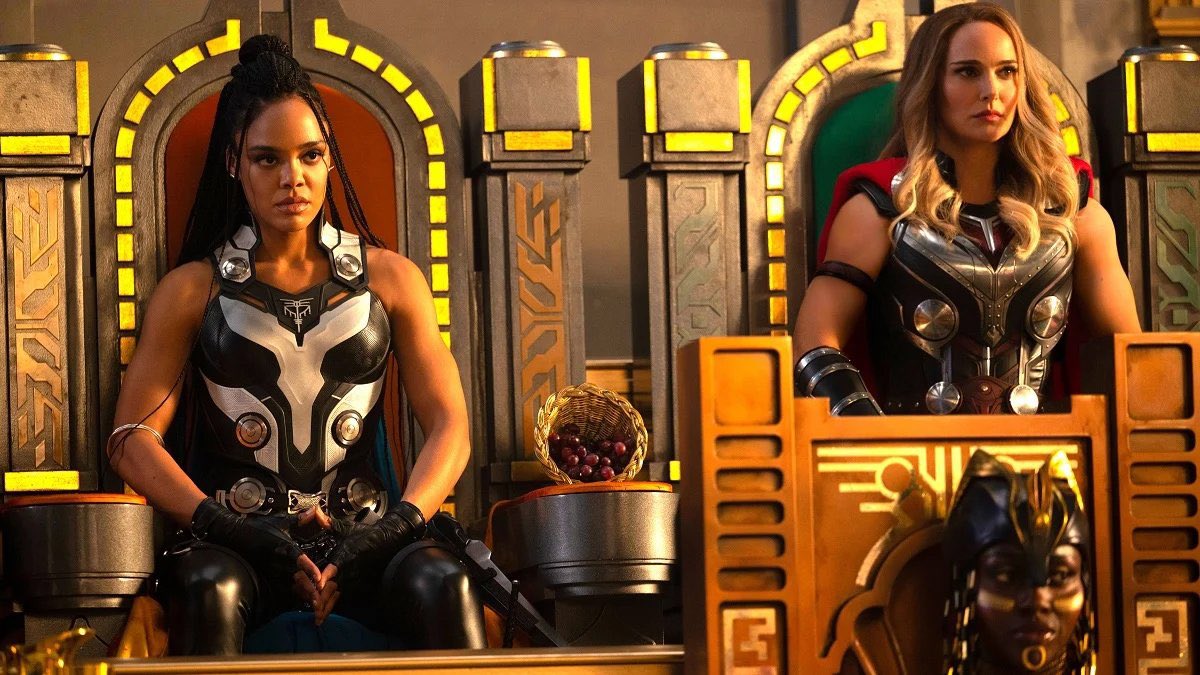 Valkyrie: While Valkyrie was never quite confirmed as queer in Rangarok (a scene implying it was cut), she is clearly confirmed as bi here. She kisses the hand of one of Zeus’ maidens. Kong also refers to her still grieving over her ex-girlfriend. One line is great, but it would’ve been much better to see a double love story of Valkyrie finding and falling in love with her queen, while Thor reunites with Jane.

Korg is confirmed as gay, with several references. Fist, he says he enjoyed Thor’s clothes being flicked off. Then later, he reveals that in his culture, two Dads hold hands in lava to get a baby. And by the end, we see him with his mate Dwayne holding hands in lava to make a lava baby.

This queer representation continues a positive trend of increasing queer representation in MCU films finally, after Eternals (Phastos kiss) and Doctor Strange: Multiverse of Madness (America’s Moms and her LGBTQ flag pin). The MCU will hopefully continue to show more, leading up to a lead queer character or on screen courting romance.

Cameos: There are some fun cameos. In the beginning of the film, Darcy returns to comfort Jane. In the end credits, Zeus asks his son Hercules for revenge on Thor.

Family Film literally. The lead cast Chris, Christian, and Natalie, and Taika’s kids are all in the film, making it a family production. During development, Chris Hemsworth said it’d be fun if his daughter India got to appear on screen. Taika worked that into the film – making her a major character Love. Chris’ brother Liam reprises his role a New Asgardian thespian. And in a flashback scene, his son runs through the woods as young Thor. Taikia’s daughter holds the bunny rabbit. Knowing Chris’ daughter plays Gorr’s daughter whom he adopts, makes these scenes touching – that on-screen father-daughter chemistry they have is very real!

So overall, Thor: Love and Thunder is fun and funny. Just needs more story thunder to really love it.