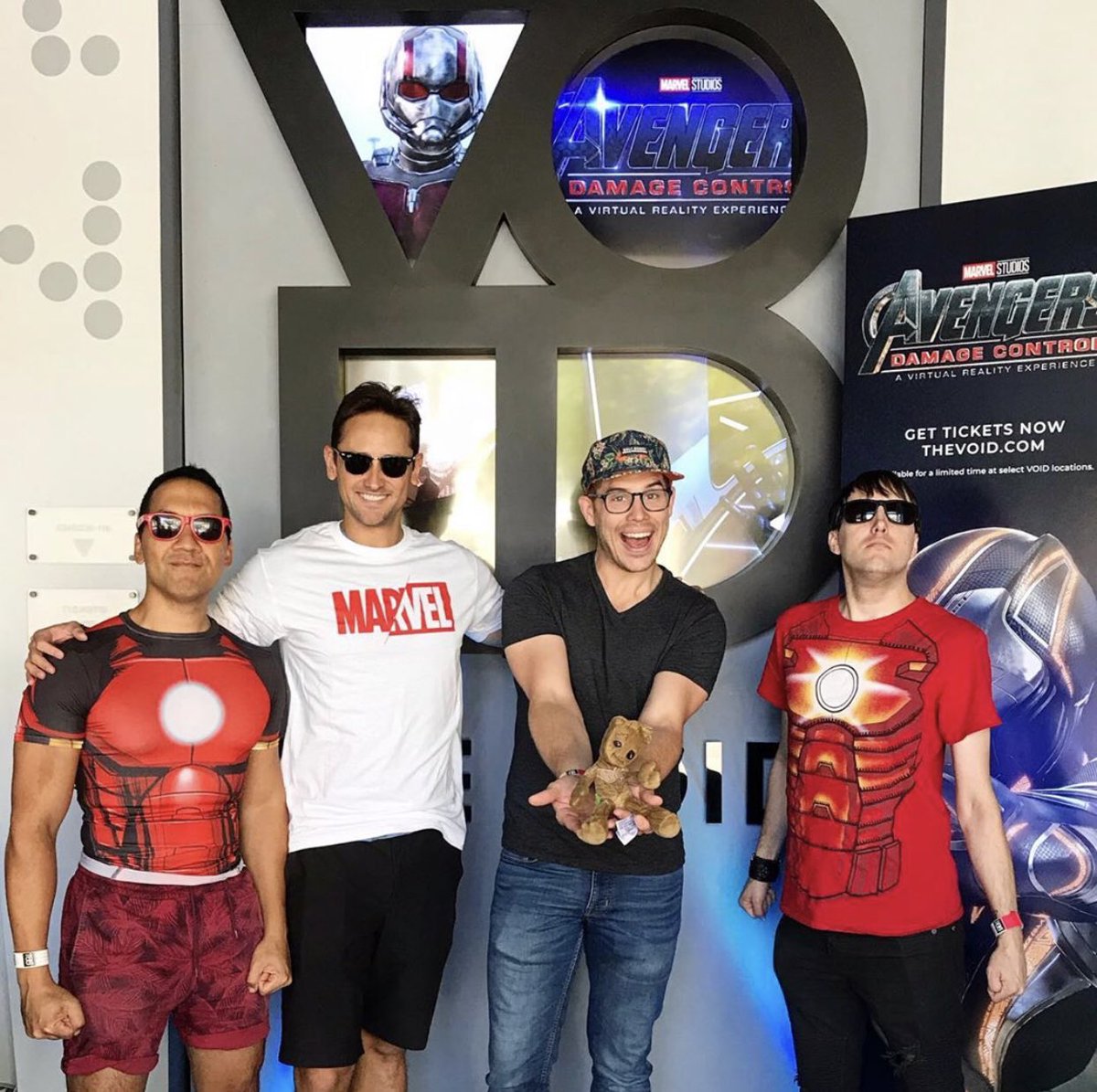 You put on VR goggles, haptic backpack, and walk around with three others in a group of four around a physical environment that maps to what you see in the VR. You fully experience the VOID’s VR, known for social (talk to three others your group), untethered / room VR (walk around in a space), touch (you can touch some objects like a steering wheel or stairway railing in the game that map to the real world). Plus, you get a score with points to encourage repeat visits.

The story, according to the VOID site: “Shuri has recruited your team to test a powerful new prototype design combining Wakandan and Stark technologies. When an enemy from the past seeks to steal the technology, you’ll fight alongside some of your favorite Avengers like Doctor Strange, Wasp, Ant-Man and more to stop the attack before they unleash an oppressive new age upon the world.” 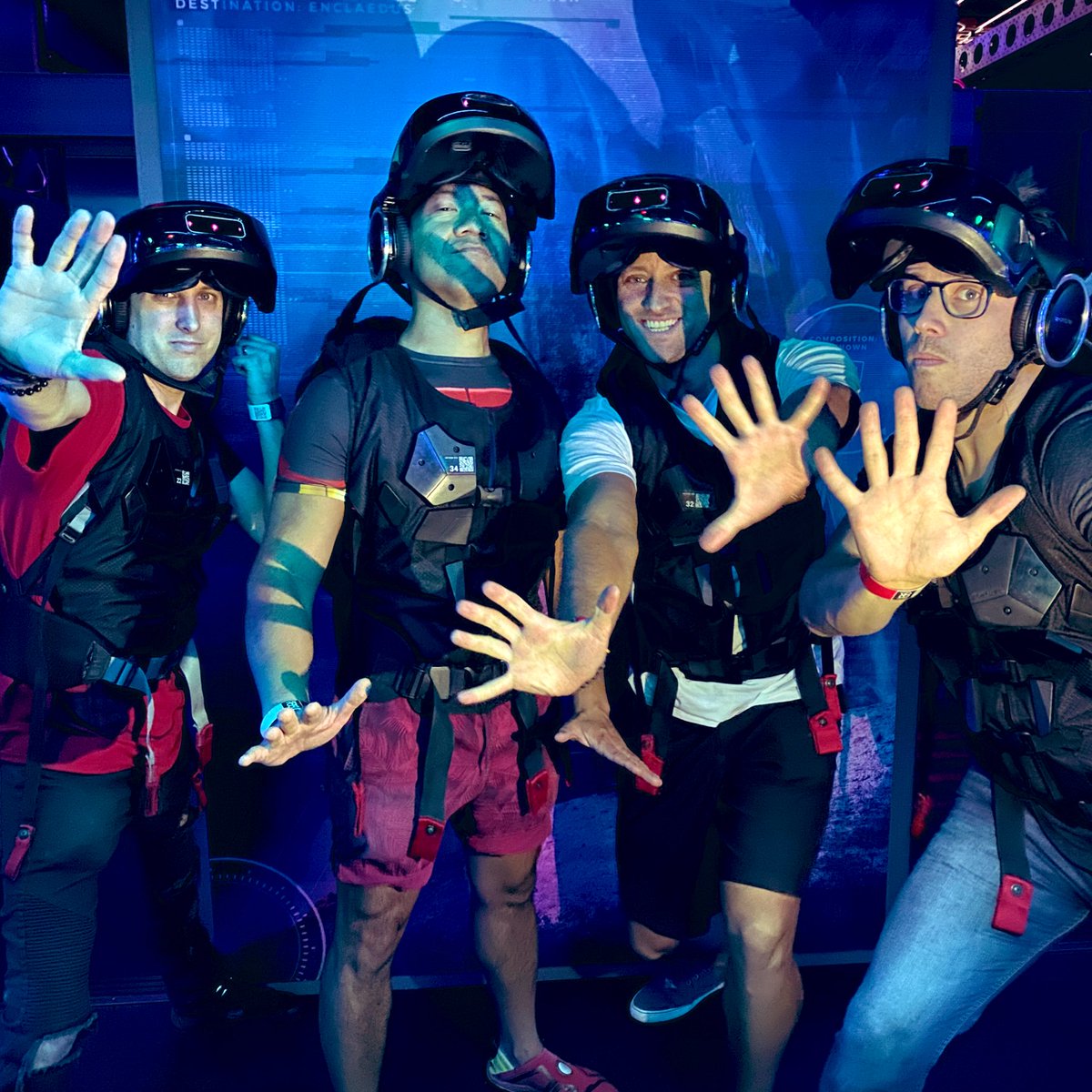 Our Digital LA influencer crew of four wore our Marvel shirts to play Avengers: Damage Control at the Third Street Promenade Santa Monica location. After you check-in and fill out the iPad wavier, you first watch a 2-minute debriefing video, where Shuri from Wakanda (the actual actress!) describes that she’s created a new super suit that combines elements of Wakanda and Stark Industries tech. The suits are worn by new recruits to help protect.

The suits can absorb energy (like the Black Panther suit) when you hold up your arm to block attacks, and then you hold your hands out to shoot a repulser blast (like the Iron Man suit). If you hold up both hands, you can shoot a large blast. Tip: you can block with one arm, and shoot with the other arm at the same time. Note: Suits do not fly.

After the debrief video, your group of four walks to the suit-up area to put on your VR goggles, haptic backpack, and enter the VR walkthrough experience. There are no prop guns, since you shoot repulser blasts by just holding up your hands. 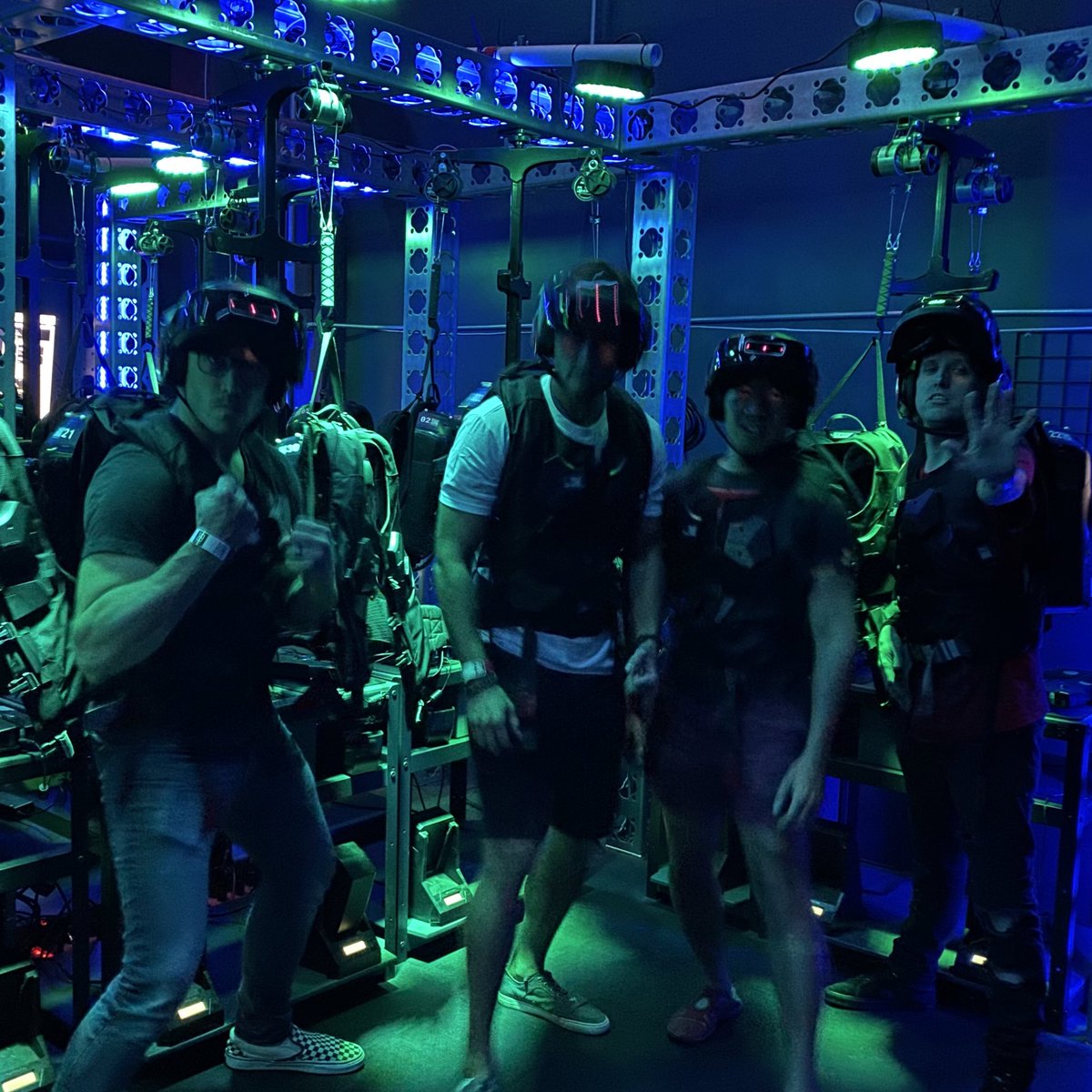 In the VR experience, you start with digital Shuri leading you through a training sequence so you get practice shooting robots and blocking. Then of course, something goes wrong, and you’re under attack by a fleet of robots. Doctor Strange helps you teleport away to his Sanctum and tells you of a new mysterious force that’s developing, and teleports you there to help the Avengers fight it. You battle along side Ant-Man, the Wasp and Spider-Man, and then fly a vehicle to a SHIELD helicarrier for a final battle with a big Avenger villain. During the battle, it’s such a thrill to fight alongside Avengers that pop in to help battle the villain, including Hulk, Thor, Iron Man, Captain Marvel and others. Also: watch for an easter egg in the battle where you least expect it.

During the experience, you’ll feel heat and wind, and smell popcorn and other smells, further adding to the immersive experience.

At the end of the battle, you get a score that shows how many baddies you defeated, with your accuracy rate, and score. Excellent for repeat visits and friendly competition with friends.

At the end of the experience, when you take off the VR goggles and backpack, it feels like you’re suddenly depowered not a super hero any more. It’s that fun!

Our crew of influencers loved it. Unlike a movie you watch, it’s a thrill to fight alongside the Avengers in battle. While we initially thought you played as Iron Man or actual Avengers like in Marvel Powers United, it’s equally fun to play yourself as a recruit in the Marvel universe. We also loved the individual scoring system, and in fact immediately played it again to improve our scores.

Steve Sievers of Bionic Buzz said it was his favorite VOID experience so far. 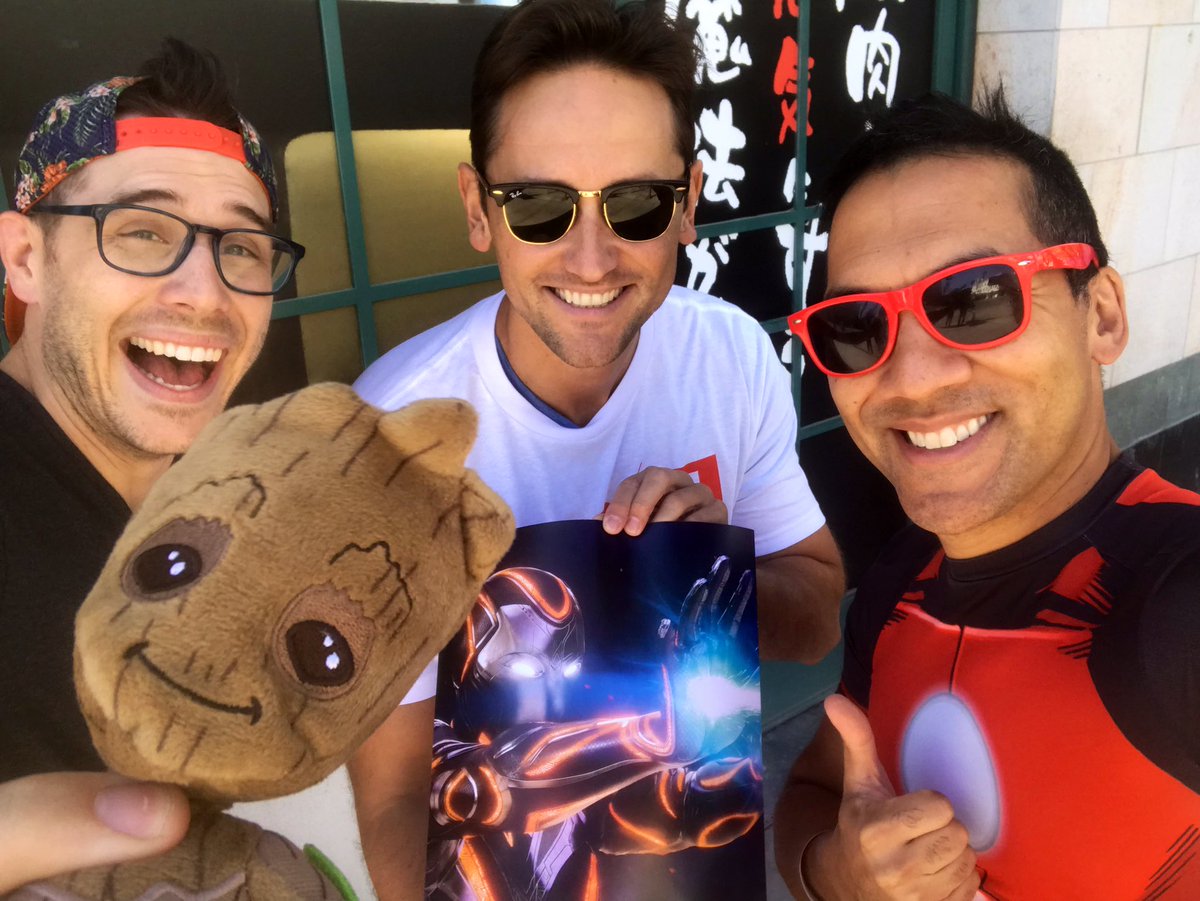 Get reservations $39.95 for a 20-minute experience on the VOID web site.

Avengers Damage Control is the latest Marvel related VR game, after the solo-play Iron Man game that debuted at the Marvel booth at San Diego Comic-Con this past July. It’s the first Marvel title for the VOID.