By now you’ve seen – and likely become daily addicted to –  Wordle, the daily word-guessing game with green and yellow square emojis popping up on your Facebook, Twitter, and Tiktok. Never have the colored square emojis been so well used! 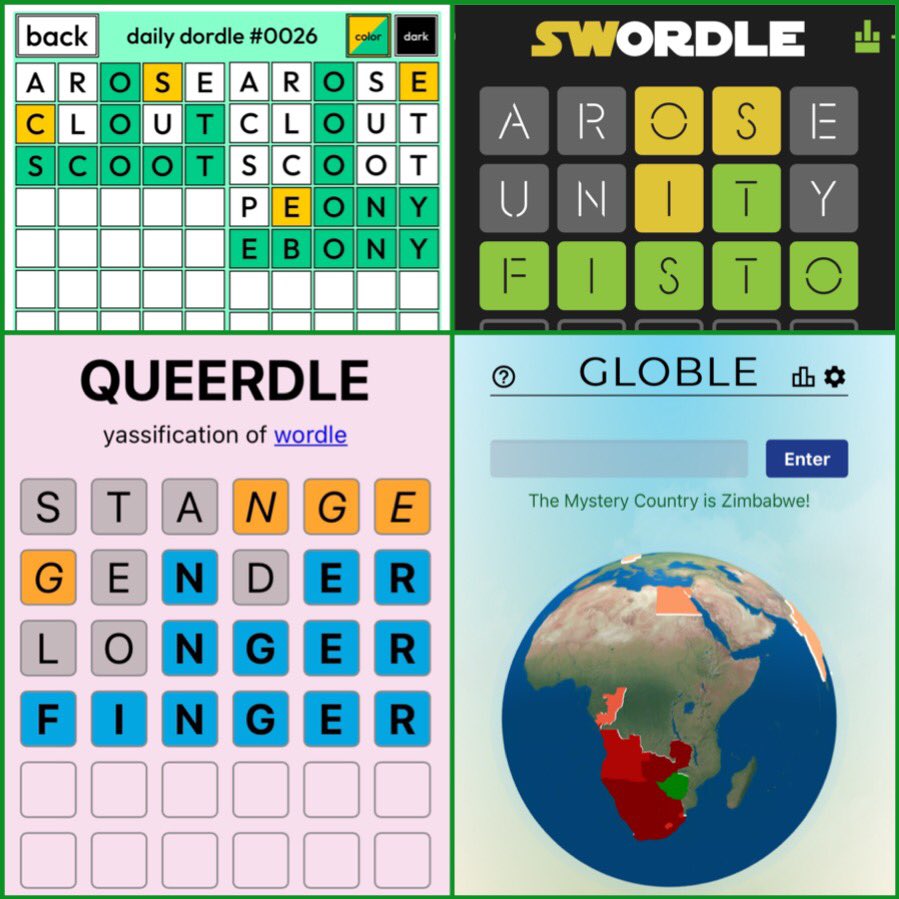 You probably know the STORY too. Josh Wardle created this word game to play with his friend. It’s a free word game where you must guess a 5 letter word each day within six tries. Like a Hangman plus Mastermind. It went public in late 2021, and steadily grew in popularity. It hit a mainstream tipping point when several mainstream newspapers wrote articles about it in mid January 2022, boosting its popularity.

Seeing all the Wordle buzz and traffic, The New York Times, known for its crossword puzzles, bought Wordle for six figures, added its own Wordle font and ad trackers in the code. It’s free for now, but could easily disappear behind a NYT pay wall or require registration, like the NYT crossword puzzle. If that happens, you can switch to….

A FLOOD of Wordle-inspired spinoffs have been GIVEN BIRTH. Almost immediately after Wordle launched, individual developers around the world have created their own games inspired by Wordle. They’re also free, easy to play, no downloads required, with social sharing. Some have long difficult URLs, so here they are in one spot in our -DLE Dictionary. Warning: Your 5 minutes every day playing Wordle may increase to 30 min+ depending on how many of these you become addicted to!

All of these refresh with a new daily puzzle, usually at midnight local time.

SWordle: Star Wars Wordle with Star Wars characters, planets, and words. Previous words: DROID, SNOKE, FISTO, SHAND (Did you see Book of Boba Fett?). Even includes a Star Wars-y font on a black space-y background. Note: Words can be from the movies, books, games, and comics, so if you only know the movies, be prepared for answers being new words and characters you’ve never heard of before.

Marvel Wordle: Marvel character names from movies, shows or comics. Note: Only Marvel words are accepted as words, making this either extra challenging or annoying depending on how you look at it.

Jewdle: ‘Words can range from English to Hebrew to Yiddish to Aramaic and everything in between.’

Multiple Simultaneous Play: For people who like a lot going on! (like double monitors, multiple windows open)

Quordle: 4 games at the same time

Norlde: N simultaneous games. You can select the N, up to at least 20 that we tried. Note that unlike the other simulatnoues play game boards which keep 2 game widths on phone, Nordle crams 5 games, making the letters microscopic!

Worldle: Guess the name of a country’s silhouette. With each guess, you get a percentage telling you how geographically close you are, and an arrow pointing to the direction of the answer country

Globle: In this graphic interface showing a color globe, you type in the name of a country, and it appears as tan, peach, orange or red depending on how close it is to the answer country, which will appear in green. It’s basically a global: ‘you’re getting warmer!’ (But not in a climate change kinda way ;D)